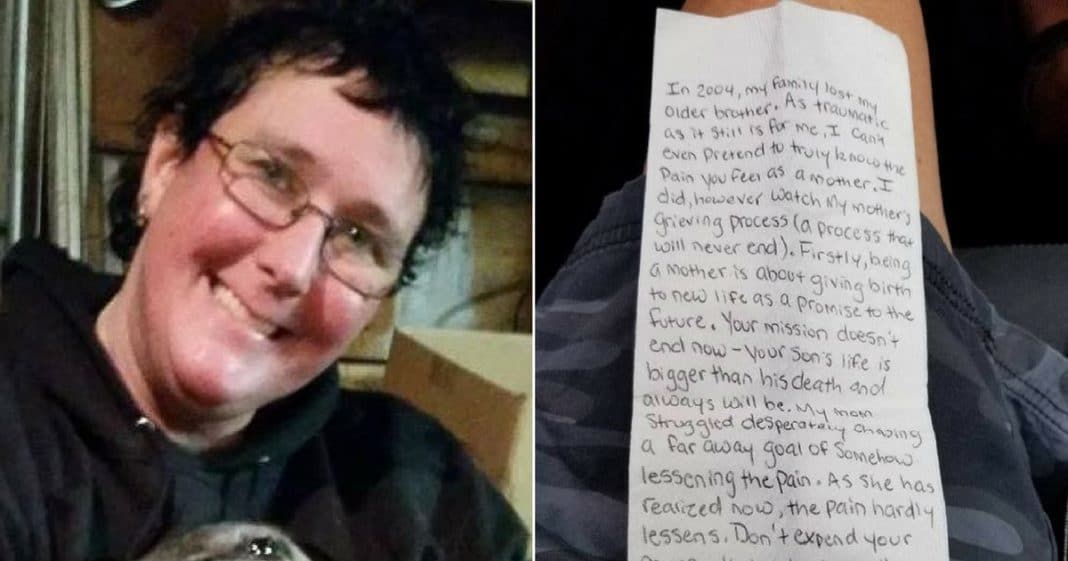 Tricia Belstra was about to do the hardest thing that could ever be asked of any parent – she was on her way to bury her son.

On August 18, as she sat between two strangers on Southwest Airlines flight 1076, she struggled to hold back her tears and to keep herself from getting sick. She held an airline sickness bag between her legs and just tried to hold on until she got to her destination.

One of the flight attendants asked if she was okay and Tricia asked for some water. Then another attendant came by.

Tricia never got his name, but she’s sure he was an angel.

As he got drink requests, he could tell that Tricia was in distress. Not wanting to cause a scene, he leaned in close and asked if she was okay. That’s when she told him that she was on her way to lay her son to rest.

The young man told her he was sorry and quickly brought her some water, ice, and a Diet Coke. The woman next to Tricia helped her pour since the distraught mother’s hands were shaking so badly.

When they landed, the woman helped Tricia with her bags. As they walked off the plane, the young flight attendant stopped her, handed her a napkin, and told her again how sorry he was for her loss.

Tricia waited until she was out of the walkway to look at the napkin, but when she saw what the flight attendant had written on it she immediately broke down in tears.

In 2004, my family lost my older brother. As traumatic as it still is for me, I can’t even pretend to truly know the pain you feel as a mother. I did, however, watch my mother’s grieving process (a process that will never end).

Firstly, being a mother is about giving birth to new life as a promise to the future. Your mission doesn’t end now – your son’s life is bigger than his death and always will be.

My mom struggled desperately chasing a faraway goal of somehow lessening the pain. As she has realized now, the pain hardly lessens.

Don’t expend your energy trying to chase this. Instead, go all out finding opportunities to experience joy. Visit family, get closer to those you’ve lost touch with, travel.

This is your story and you owe it to yourself and your son to make sure that you survive this. Do not pressure yourself.

This world is full of people who do truly care about you, even if it doesn’t feel that way. I won’t stop thinking about you anytime soon or how you’re doing or what you’re up to. You’ll come out of this a stronger person and I’ll be rooting for you the whole time.

As Tricia read his words, she was able to release some of the pain she had been holding in the whole flight. As the note said, the pain will never go away, but reading these words helped her take one tiny step toward healing.

Tricia never got the young man’s name, but she asked her priest to bless him and decided to share her story in the hope that it will one day make it back to the young flight attendant.

In sharing his heart and showing compassion to this grieving mother, this young man did more than he could ever imagine.

Were you touched by the kind words this man wrote to Tricia? So share this!