G’pa Seen Weeping As Grandson Takes Stage. When I Heard Why I Couldn’t Hold Back My Own Tears 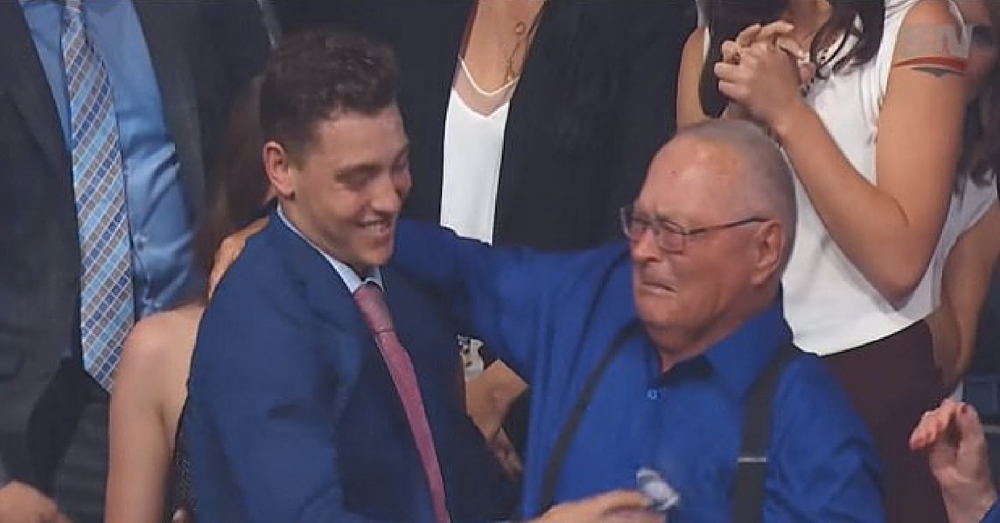 It was the culmination of years of hard work and sacrifice when Tyson Jost got drafted to play for the Colorado Avalanche NHL team. But it was his grandfather’s reaction to his getting picked that really had people talking.

Tyson was raised by a hardworking single mom who did everything she could to make sure her children could succeed. Tyson showed a gift for the game of hockey and got the opportunity to attend the Pursuit of Excellence school in Kelowna, B.C., which would set him on the path to play hockey professionally.

The school was far away from home and, if he were to go, he would have to leave his mom behind.

That’s when his grandparents stepped up in a major way. They put aside their retirement and moved to Kelowna with Tyson.

According to Scary Mommy, Tyson’s grandparents pushed him hard, teaching him the tough lessons of hard work and discipline. But their training paid off when Tyson was drafted in the top 10.

Managers and coaches were impressed not only with Tyson’s prowess on the ice, but with the way he conducted himself in interviews as well. One general manager said Tyson was the best kid he had ever seen in an interview in the 10 years he had been conducting them.

When Tyson’s name was called during the draft, the emotion of the moment – knowing that all the hard work had paid off – hit Tyson’s grandfather hard. He could be seen crying tears of joy as he hugged his grandson and watched him take the stage to officially become a member of an NHL team.

Watch the sweet moment for yourself by clicking on the video below:

Were you touched by this grandfather’s reaction? So share this!