G’ma Thinks Men Are There To Kidnap Grandson, But What They Do Next Leaves Her In Tears. 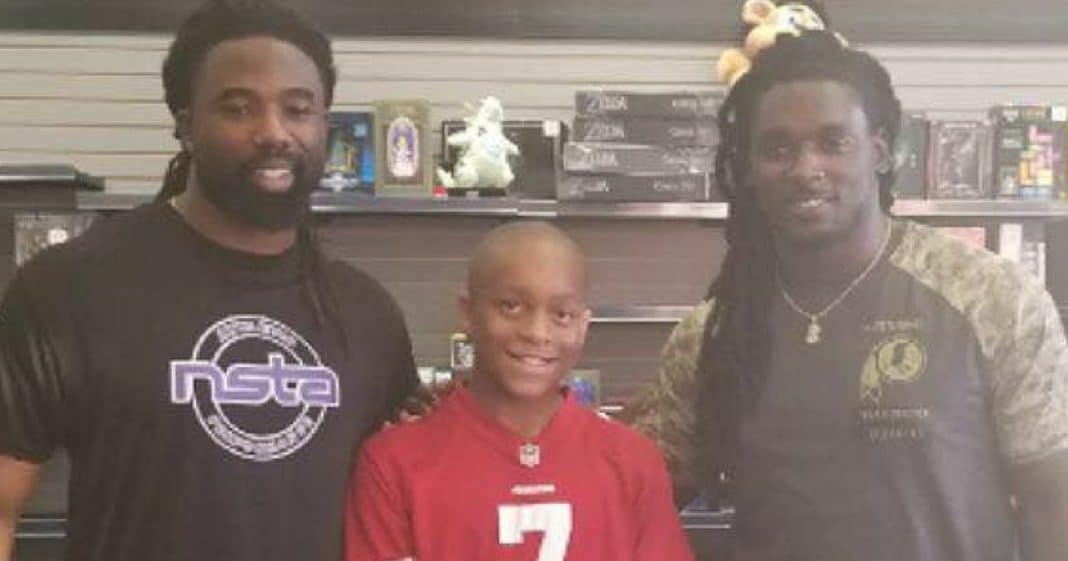 The way things are these days, you can never be too careful. We hear stories all the time about children who are abducted or hurt. It’s not a bad thing to be cautious.

That’s why it’s understandable that Saundra Watts was a little concerned when her 10-year-old grandson Jaden told her two men had approached him and offered to buy him an Xbox One game console.

Saundra and Jaden had been out running errands together. First, they took Saundra’s dog to the groomer’s, then Saundra went to get her makeup done. She told Jaden he could go to the nearby GameStop while he waited for her.

All of a sudden, he ran back into the salon.

“He’s jumping up and down, saying, ‘Nana! Nana! Nana! These two guys want to buy me an Xbox. You’ve got to come right now,’” Saundra recalled.

Immediately her antenna went up. Saundra is an advocate for abused and neglected children and was worried these men might have an ulterior motive.

“The first thing I’m thinking is there’s some pedophile trying to buy my grandson an Xbox,” she said. “So I’m like, I’m going to bust up in there and bust his bubble.”

When they got to the store, Jaden introduced her to the men who had offered to buy him the game. What one of them said next made Saundra’s jaw drop.

“Ma’am my name is Keith Marshall and this is Rob Kelley and we play for the Washington Redskins and we would love to buy your son an Xbox one for his birthday,” they told her.

Apparently, the two pro football players overheard Jaden mention that he had been wanting an Xbox for the past several years but his parents couldn’t afford one. That’s when Marshall asked Kelley if he wanted to go in on one with him and Kelley agreed.

“I was cool with it,” Kelley said. “I wish someone would’ve done something like that for me when I was growing up. His family is probably able to do whatever they want, but everybody is not able to have the stuff that we have the luxury of having. … To make an impact on somebody, I have no problem with it.”

Jaden was over the moon. He asked if he could get a picture with the players, which they happily agreed to. As they left the store, Saundra said he “flew on cloud nine to the car.”

Joey Snapp was in the store at the time of the inspiring exchange and posted about it on Facebook. He said he was impressed not only with what these football players had done, but also that they didn’t seek any praise or recognition for their kind deed.

“My jaw hit the floor watching this,” he wrote. “So they buy him the Xbox and a game and they take pictures with the child and go on about their day. I didn’t even know what to say. It was such a good moment from 2 guys who I will forever be a fan of from this day on.”

Kelley said they didn’t do it for the praise.

“The family wanted a picture that they could have, so they took one, but we didn’t post anything,” he said. “Stuff like that is done from the heart. That was something that we just did and it ain’t gotta be broadcasted. … Doing that, it felt so good just knowing that I didn’t have no ties to that kid, I didn’t have to do that. It felt good.”

For Jaden, those moments with Marshall and Kelley will be ones he won’t soon forget.

“The next morning, he woke up and looked at me and said, ‘Nana, I had a dream that I was in a GameStop and two Redskins players bought me an Xbox,'” Saundra laughed. “I said, ‘That wasn’t a dream, you dodo, that really happened.’ It was un-be-lievable. Unbelievable. He’s just such a good kid and it was just such a blessing. It was just so wonderful, the experience of a lifetime.”

Were you touched by what these football players did for this young boy? So share this!