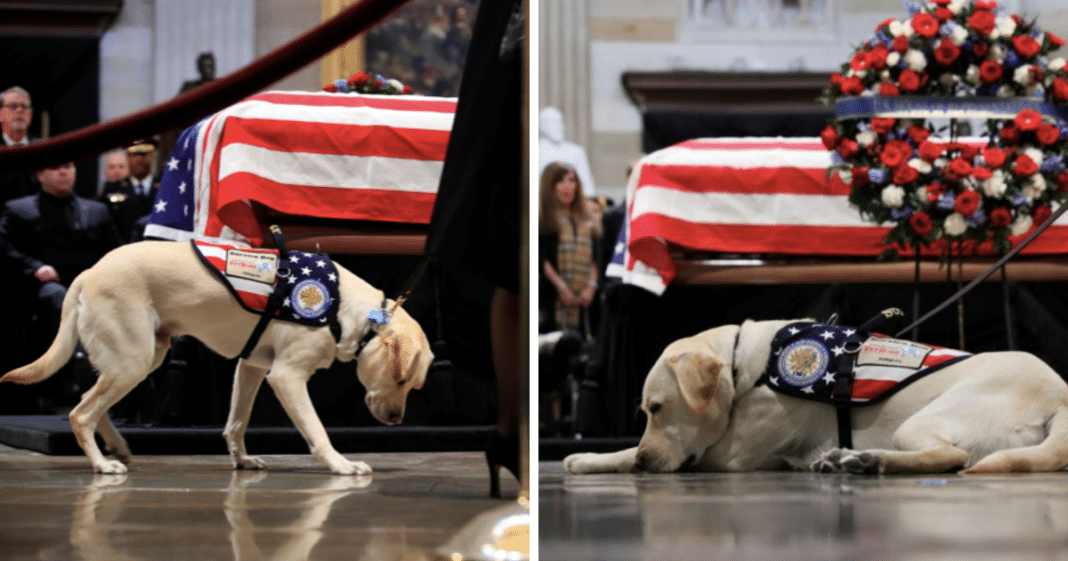 The relationships between dogs and Presidents of the United States have always captivated and warmed the hearts of Americans. Now President George H.W. Bush’s service dog is melting the hearts of people everywhere as he prepares for a new mission of service to wounded soldiers.

On Sunday, Bush’s spokesman, Jim McGrath shared a powerful and iconic photograph clearly showing the loyalty Sully had to the 41st president. The image showed Sully laying beside the coffin covered in the American flag with the fitting caption:

Sully was later seen by the former president’s side at the U.S. Capitol.

George H.W. Bush's service dog Sully sits quietly by the former president's side in the U.S. Capitol. Sully will stay with the family at least through funeral services at the National Cathedral on Wednesday, before becoming a service dog at Walter Reed. https://t.co/98Xkmxqw1b pic.twitter.com/TZuyctYUTv

President Bush passed away surrounded by his loving family Friday evening at 94 years old. Sully flew with Bush’s coffin to Washington, D.C. The Labrador Retriever was named after an airline pilot, Chesley “Sully” Sullenberger III, known for the “miracle on the Hudson” emergency landing of a US Airways Airbus in 2009.

Sullenberger commented about his namesake on Twitter on December 3.

My family and I have enjoyed working with service dogs for over 30 years. It's wonderful that now after serving President George H.W. Bush, my namesake "Sully" will serve wounded service members at Walter Reed. https://t.co/KWahRsr3ML via @washingtonpost

Later this week, Sully returns to America’s VetDogs in Smithtown, New York where he will stay for the holiday season. At 15 months old, Sully was taken to the VetDogs prison puppy program, where inmates taught him the foundations of service dog training. Sully later honed his skills at the VetDogs facility in Smithtown. 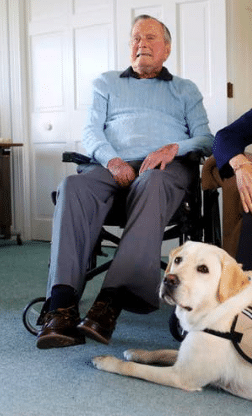 Following his holiday visit in familiar surroundings, the presidential service dog will take on his new duties at the Walter Reed National Military Medical Center’s Facilities Dog Program in Maryland. The center recommended Sully as a perfect match for Bush when the Labrador was 2-years-old.

This beautiful, very good dog, is Sully. He’s transitioning to a new career at Walter Reed, but stopped first at the ⁦@uscapitol⁩ for one last goodbye. #remembering41 ⁦@AmericasVetDogs⁩ pic.twitter.com/tbqjSU4PUj

In his new duties at Walter Reed, Sully will work with SGT Dillon and SGT Truman, two fellow service dogs. The dogs will work with wounded soldiers and active duty personnel while they undergo physical and occupational therapy at the Walter Reed National Military Medical Center.

According to PEOPLE, Sully will work with soldiers who have suffered amputated limbs.

“Through retrieval, bracing, and innovative tug-of-war exercises, these dogs work with service members as they adapt and work with their new prosthetic limbs.”

Sully provided invaluable service to President Bush, helping him cope with life after the loss of his beloved wife, Barbara, in April. Now he serves other veterans who have risked their lives for our country in combat. We don’t yet know who will have the honor to be Sully’s next handler at Walter Reed.

Follow Sully Bush’s Instagram account to keep up with the latest updates on this famous and loyal service dog. One of his last posts showed Sully laying beside President Bush as he voted in the midterm elections. Another post showed him helping with some Christmas decorations.

Assisting with voting must be easier with thumbs. It was very nice of Secretary James Baker to help my best friend cast his vote. They didn’t even let me push the button! . . #vote . . . . . . #SullyHWBush #SullyBush #bush41 #instagood #goodboy #DogOfInstagram #TalesOfALab #InstaDog #InstaDogs #Dogs #AmericasVetDogs #GuidedogFoundation #labrador