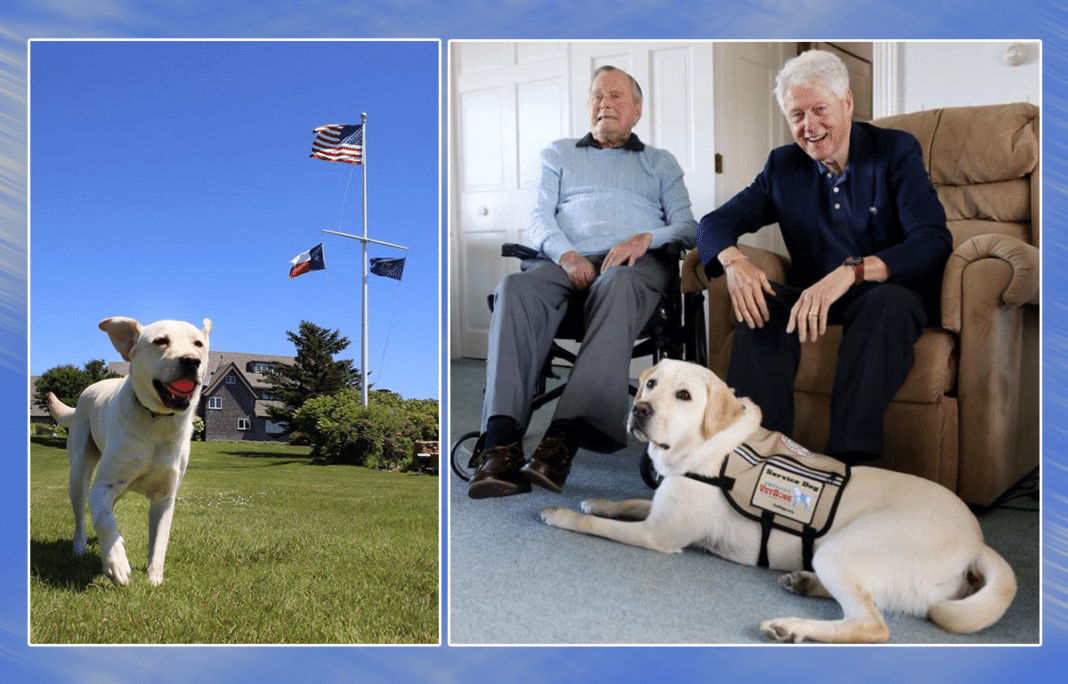 In a beautiful moment this week, former president George H.W. Bush shared a picture on Twitter, announcing the newest member of the Bush family, “Sully.” The extremely well-trained Labrador Retriever arrived at the same time as former president Bill Clinton, who was all smiles.

A great joy to welcome home the newest member of our family, "Sully," a beautiful — and beautifully trained — lab from @AmericasVetDogs. Could not be more grateful, especially for their commitment to our veterans. pic.twitter.com/Fx4ZCZAJT8

The genuine friendship is very touching, as Bush revealed he was wearing a pair of socks with Bill Clinton’s face on them to mark the occasion.

Special visit today with a great friend — and now, a best-selling author. Luckily I had a freshly laundered pair of @BillClinton socks to mark the occasion. pic.twitter.com/v9jb4sRexh

The 2-year-old Labrador was recommended to Bush by the Walter Reed National Military Medical Center in Bethesda, Maryland and is an America’s Vet Dogs service dog. He’ll offer companionship and help with daily tasks such as answering the phone, opening doors, picking up items, and getting help for Bush when he needs it.

Bush has been in and out of the hospital following the loss of his beloved wife and former First Lady, Barbara Bush, a famous dog lover who we all dearly miss. We hope that Sully will help to lift his spirits, and from the pictures, it appears that he has done just that already.

Sully is named after former airline pilot Chesley “Sully” Sullenberger III, who performed a famously heroic “miracle on the Hudson” emergency landing of a US Airways Airbus when both engines went out in January 2009. The plane had run into a flock of Canda Geese and the pilot saved 155 people.

While the pilot wasn’t trained for such a scenario, Bush’s new canine companion named in his honor is extremely well-trained for all kinds of helpful tasks. From the early age of 15 months, Sully was taken to the VetDogs’ prison puppy program, where inmates taught him the foundations of service dog training.

Sully later honed his skills at the VetDogs facility in Smithtown, New York and was hand-selected after careful consideration as the perfect match for the former president.

The whole extensive process from puppy to a placed service dog requires a big investment of $50,000, paid for by donations and volunteers. Veterans receive their dog for free and the dogs provide priceless companionship and a wide variety of invaluable services, such as critical therapy for veterans with PTSD.

Sully was featured in an article just days before he would have the honor of finding his forever home with Bush.

As the constant companion to the 41st President, Sully will raise awareness and appreciation for these amazing service dogs. Learn more at vetdogs.org.

I started settling in at Walker’s Point yesterday. Lots of new smells and kind people. I have had a lot of training to get to this point, it hasn’t always been easy, but I am ready for the job. “Any definition of a successful life must include service to others”

See more in the video from TIME below: