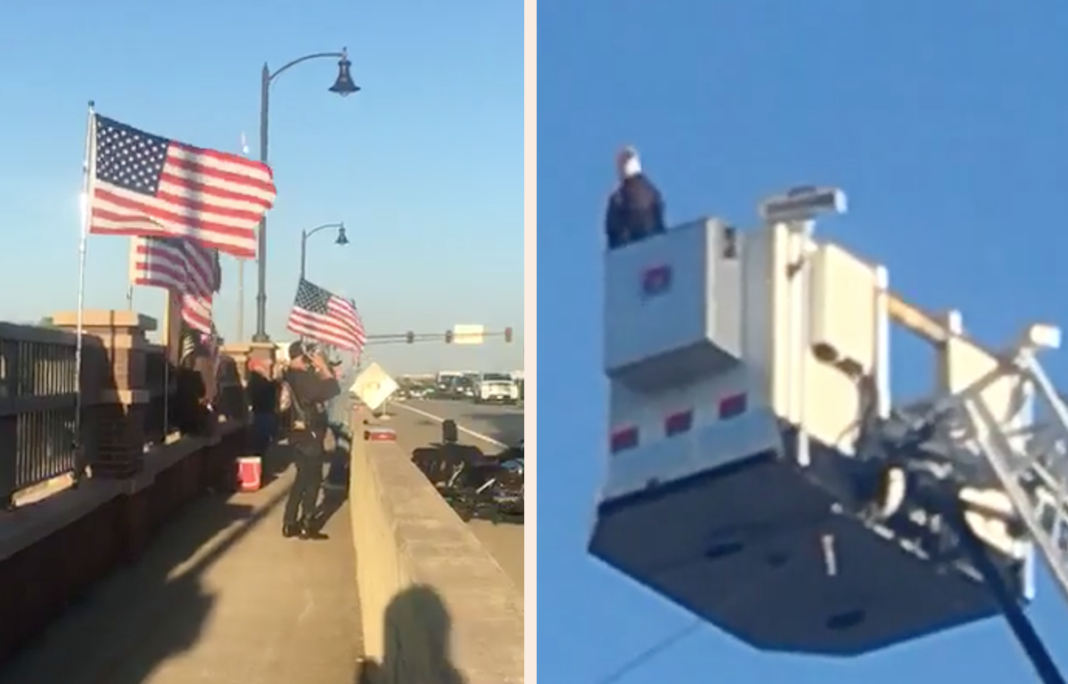 A bald eagle made the Minneapolis fire department’s annual 9/11 memorial unforgettable, perching atop the firetruck’s aerial ladder as American flags and a banner reading “We will never forget” were flown along the Main Street bridge.

“What could be more symbolic for this day? AND on a fire truck,” states the viral Facebook post.

The eagle became affectionately known to the firefighters as “The Andover Eagle” on social media as they watched in total surprise as the video went mega-viral, reaching many millions.

See the video below that has been seen over 4 million times and shared 162K times at the time of this writing. It was originally shared live as it happened at 7:15 a.m. on Tuesday.

An eagle landing on the Aerial truck during our 9/11 display! Media: Please feel free to share (Not edit) this video. The video was captured by Fire Chief Jerry Streich, Andover Fire Department #ATeam and has gone viral with millions of views on CNN, ABC, NBC, and many more. It has also been placed on the Ellen D list. Share for others to see. To reach Chief J.Streich, contact at 763.767.5192

Chief Streich captured the moment seconds before the eagle flew off into the sky.

“Phenomenal. And there goes the eagle,” he says.

Several surrounding departments took part in the tribute, one they will never forget thanks to the guest appearance by the bird chosen June 20, 1782, as the emblem of the United States of America.

Viewers expressed their gratitude and appreciation for the moment in the comments as all Americans remembered the tragic loss of 2,977 people in New York City, Washington D.C., and outside of Shanksville, Pennsylvania. At least another 1,000 were sickened by exposure to the debris at Ground Zero.

Some of the comments:

“It doesn’t get any more American than that!”

“A sign from God just how strong and blessed we are!♥️??”

“Truly America is and has always been great.”

The 9/11 Memorial & Museum honors the 343 firefighters who selflessly gave their lives to help others in the terrorist attack.

Seventeen years after the attack on Sept. 11, 2001, which was orchestrated by al Qaeda leader Osama bin Laden, forensic scientists are still working diligently to identify the remains of the fallen. There are over 1,000 persons’ remains yet to be positively identified.

Long live The Andover Eagle ? and the brave firefighters of America who made this year’s memorial extra-special.