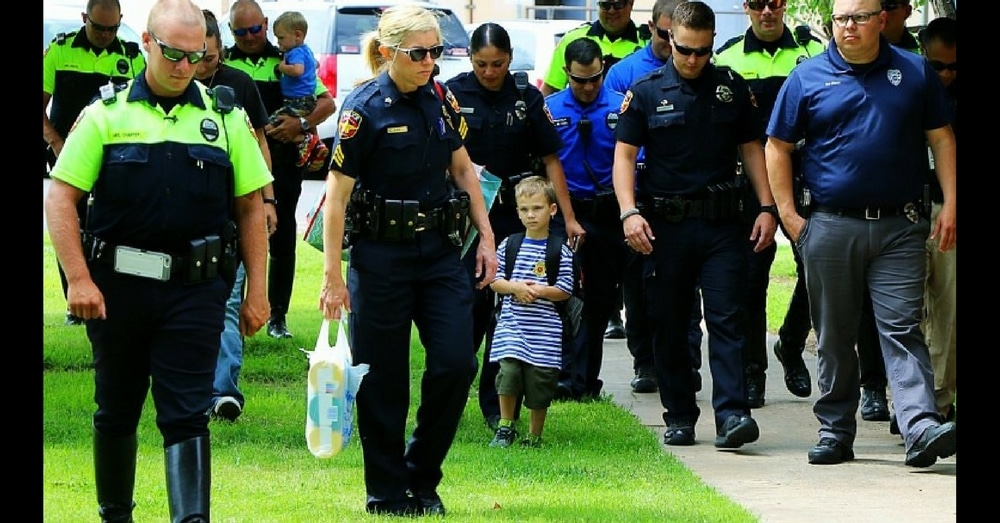 The first day of school is always filled with a lot of emotions for young kids (and their parents), but this one was especially difficult for 4-year-old Jackson Scherlen.

Jackson’s dad, Justin, died just two weeks before he was supposed to start school after complications from a crash that occurred while he was on duty. Now the young boy was facing his first day of pre-K without his dad by his side.

Knowing the day would be especially difficult for young Jackson and his mom, Jessica, their “blue family” stepped up and stood by them.

As Jackson arrived at school for his first day a line of police officers greeted him. They walked him up to the school, wished him good luck, and gave him hugs before he headed to his class.

Although no one can replace his dad, having all of those other officers show up to show their support meant the world to Jackson.

“He was shocked when we first showed up and saw everything,” Jessica said. “I think Jackson really enjoyed having everyone here. Just to know that he’s still loved by the blue family and that they still care. Emotionally, it’s awesome to see.”

The gesture was just as special and emotional for the officers involved.

“I’d give it all back just to have Justin here with his son,” said Officer Daniel Smith. “At least we can be here for him and let Jackson know that he always has someone to call on.”


Were you touched to see how these officers stepped up for this grieving family? So share this!