Family Of 9 Caught In Riptide Trying To Save Kids, That’s When Strangers Take Matters Into Their Own Hands 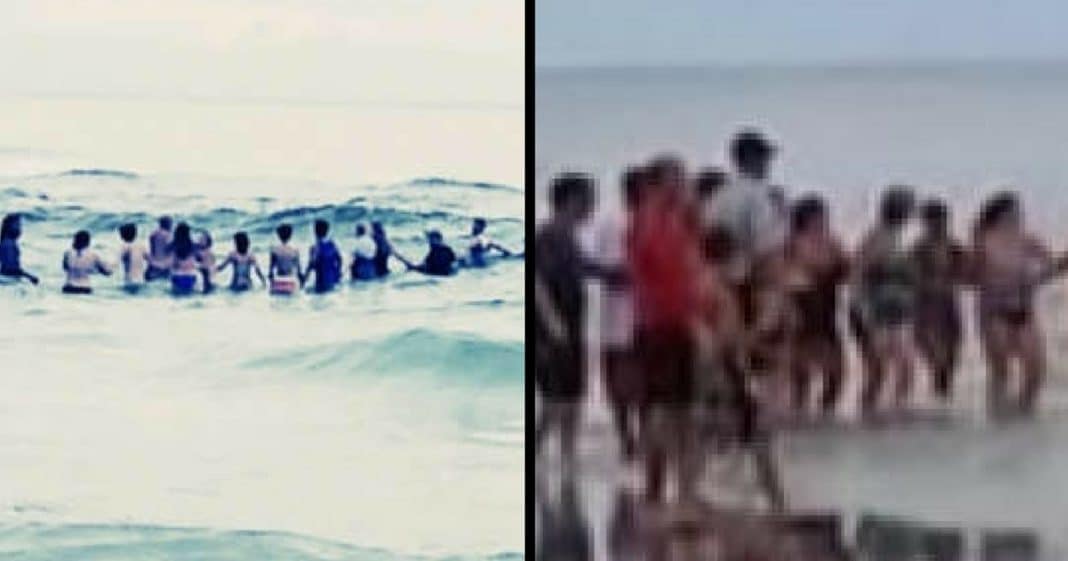 Anyone who has ever been caught in a riptide knows just how terrifying that can be. You’re out enjoying a dip in the ocean when an unseen current suddenly rips you away and starts dragging you out to sea.

Experts say that if you do get caught in a riptide, you should swim parallel to shore to escape it, but that’s not always as easy as it sounds. In the panic of the moment a person can forget what to do, or they may grow too tired to swim or not be a strong swimmer to begin with.

Sadly, the United States Lifesaving Association reports that there are over 100 deaths due to rip currents on U.S. beaches each year. In fact, rip currents account for over 80% of the rescues performed by surf beach lifeguards.

Thankfully for one very lucky family, though, the heroic actions of strangers saved them from becoming part of that awful statistic.

Roberta Ursrey and her family were spending the day at M.B. Miller County Pier in Panama City Beach, Florida, when she noticed her two sons were missing. Panicked, she went searching for them, and that’s when she heard their screams – they had been trapped by the current.

Though others warned her not to go in the water, Roberta was not about to watch her sons drown. She, her mother, and five other family members swam out to the boys, but they soon found themselves trapped in the current as well.

Jessica Simmons had stopped at the beach for dinner with her husband and had just found a discarded boogie board when she noticed people pointing at the water. At first, she thought they had spotted a shark, but when she realized there were people trapped in the water and drowning, she jumped on the boogie board and began paddling out toward the family.

“These people are not drowning today,” Jessica remembers telling herself. “It’s not happening. We are going to get them out.”

As Jessica swam out, her husband and some other men began to form a human chain in the water. More and more people from the beach rushed to join them. Those who couldn’t swim stayed in the shallow water, while the stronger swimmers waded out further into the ocean.

Eventually, about 80 people linked arms to form a chain out to the stranded family, getting within feet of them. Jessica and her husband were then able to tow the family to the chain, which passed each family member back to shore.

It was a group effort of heroism that is unlike any we have ever seen! Though none of these people knew each other or the drowning family, they banded together and put their own lives at risk to save the lives of the Ursrey family.

“I am so grateful,” Roberta said later. “These people were God’s angels that were in the right place at the right time. I owe my life and my family’s life to them. Without them, we wouldn’t be here.”

Thankfully all of the Ursey family members survived, though Roberta’s mother suffered a major heart attack during the ordeal and remains hospitalized, and a nephew broke his hand. All in all, though, the outcome is a miraculous one.

Jessica said she was so impressed and heartened to see the goodness of humanity at work on the beach that day.

“It’s so cool to see how we have our own lives and we’re constantly at a fast pace, but when somebody needs help, everybody drops everything and helps,” she said. “That was really inspiring to see that we still have that. With everything going on in the world, we still have humanity.”

If you ever find yourself caught in a riptide, the National Weather Service has some important tips to remember:

Jamie MacMahan, who studies rip currents, has another tip that could save your life:

“If you can relax—and it’s a long time, for maybe three minutes—you’re generally going to float back to the beach.”

Were you inspired by the way these strangers banded together to save this family? So share this!