Elderly Woman Tells Cop She’s Frightened After Irma. What He Does Next Will Melt Your Heart 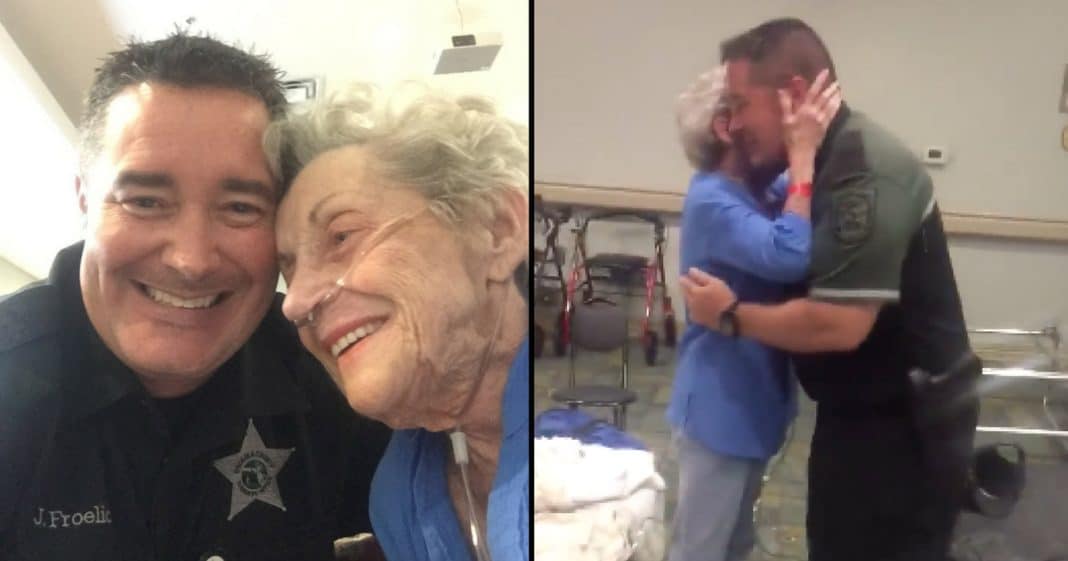 When Hurricane Irma swept through Florida, it left many people displaced, unsure of when they would be able to return home, or if they would even have a home to return to.

When Pat had to leave her home and flee to the Osceola Council On Aging Senior Center for shelter, her mind was filled with worry. Thankfully, she had a hero looking out for her.

Deputy James Froelich of the Osceola County Sheriff’s Department was walking around the shelter – only about halfway through his 36-hour shift – when he noticed Pat sitting on the edge of her cot looking sad. He went over to talk with her.

“She told me she was worried about her house, her cat, the people at the shelter, and what the storm was going to do,” Froelich said. “I assured her she was in a safe place and there wasn’t any sense sitting there with a frown—so I asked what I could do to put a smile on her face.”

As the hurricane winds whipped around outside, Pat told Deputy Froelich that a dance would help her feel better. Without a second thought, Froelich took her in his arms and began to sway back and forth with her.

As they danced, the words to Bobby Darin’s “Somewhere Beyond the Sea,” which he used to sing to his own children, came to his mind and he started to sing to Pat.

“Ah, he sings!” she exclaimed as a smile crept across her face.

As they finished the dance, Pat gave Froelich a hug and kiss on the cheek, her spirits clearly brightened after his sweet act of kindness.

A video of the precious moment quickly went viral and people from all over the world have written in saying how touched they were by the deputy’s actions.

“This is beyond awesome,” said Cecilia Carlisle-beaird. “Thank you, Deputy Froelich, you are amazing.”

“[The] world would be a better place if we had more people like the Deputy,” said Annie Szuwala-Polinski

Froelich has been blown away by the attention his actions have received.

“A lot of people asked me why I did it,” he said, “and I say that if my mom was in the same place, I would hope somebody would do the same thing for her.

“If I have the capability to brighten somebody’s day, I’m going to do it every time. We need more smiles in the world, not frowns.”

Were you touched by what Deputy Froelich did to boost this woman’s spirits? So share this!