Doctors Say To Abandon Baby Born With ‘Half A Face.’ Parents’ Response Leaves Them In Disbelief 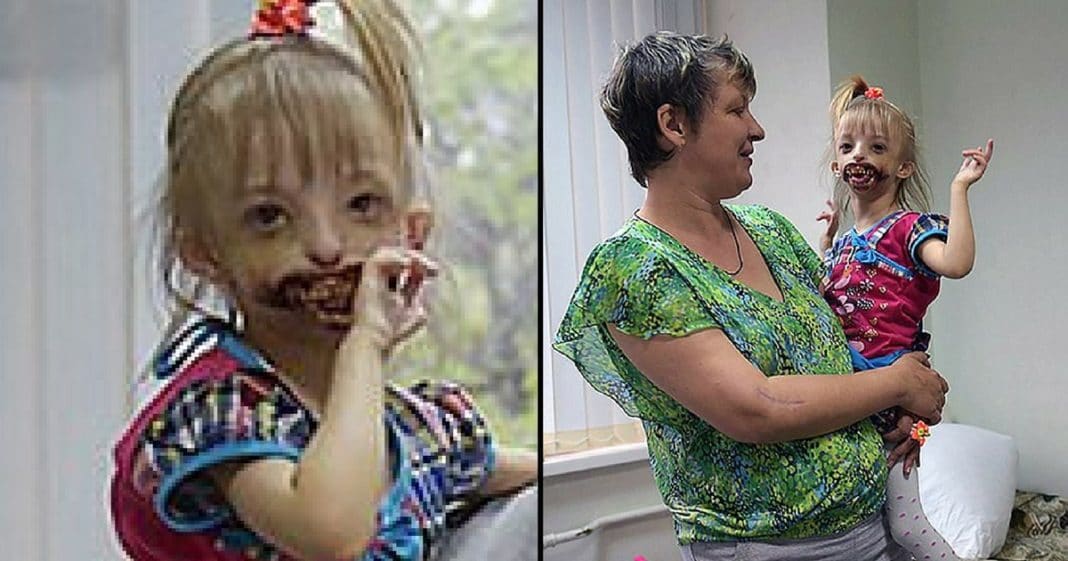 As soon as Elena Shpengler gave birth to her baby, she knew something was wrong. The doctors looked concerned and began making calls, and they wrapped the baby up in blankets and wouldn’t let Elena see her.

Hours later, after begging to be allowed to see her daughter, the doctors finally gave in. When Elena pulled back the blankets, though, she was so shocked she lost consciousness.

Her daughter, Darina, had been born with serious genetic mutations that left her with no lips or chin and her face covered in blood.

Doctors told her to just leave the baby at the hospital and forget about her, but Elena and her husband, Yury, who live in the Krasnoyarsk region of Russia, refusedto let their daughter go into their country’s grim orphanage system.

“She is ours, our girl,” Yury told Elena.

Since Darina was born, the Shpenglers have faced intense prejudice and cruelty, not only from strangers, but from most of their friends and family. Some relatives even told the police that Yury and Elena had disfigured their daughter on purpose. They eventually had to move to get away from it all.

“Only my sister supported me,” Elena said, “all other relatives just stopped any communication with us. My brothers, their children, my husband’s mother – nobody wanted to accept Darina.”

Despite the hurtful words and alienation, Yury and Elena have never once considered giving up on their beloved daughter.

“We do not hide Darina from people. We take her everywhere with us,” Elena said. “My husband Yury does not feel ashamed either. He takes Darina everywhere. People told us to put a mask on her but he replied: ‘If you don’t want, don’t look at her – but we accept her the way she is.'”

The Shpenglers want to give Darina as normal of an upbringing as possible, but people’s reactions to her condition have made that difficult. When they tried to enroll her in a local kindergarten, Darina was denied access as the school thought other children “would be scared.” Social services sends two teachers to visit Darina once a week so she can get a basic education, but Elena wants her to be able to get out and make friends.

“She is such a sociable girl,” she said. “We have bought lots of toys for her but nothing can replace friends.”

While local doctors have failed to support them, the Shpenglers have raised money to pay for medical treatment in Moscow. Doctors there have told them Darina will have to undergo major surgery every two years.

The three-year-old has already completed one surgery where her mouth was sewn to make it smaller, and she is believed to be recovering well.

There is still a long, hard road ahead of this special family, but even though they don’t have much support, the Shpenglers are determined to carry on. They say their struggles have only made them stronger.

“The truth is this trouble has only brought us together,” Elena said.

Are you glad Yury and Elena have refused to give up on their daughter? So share this!