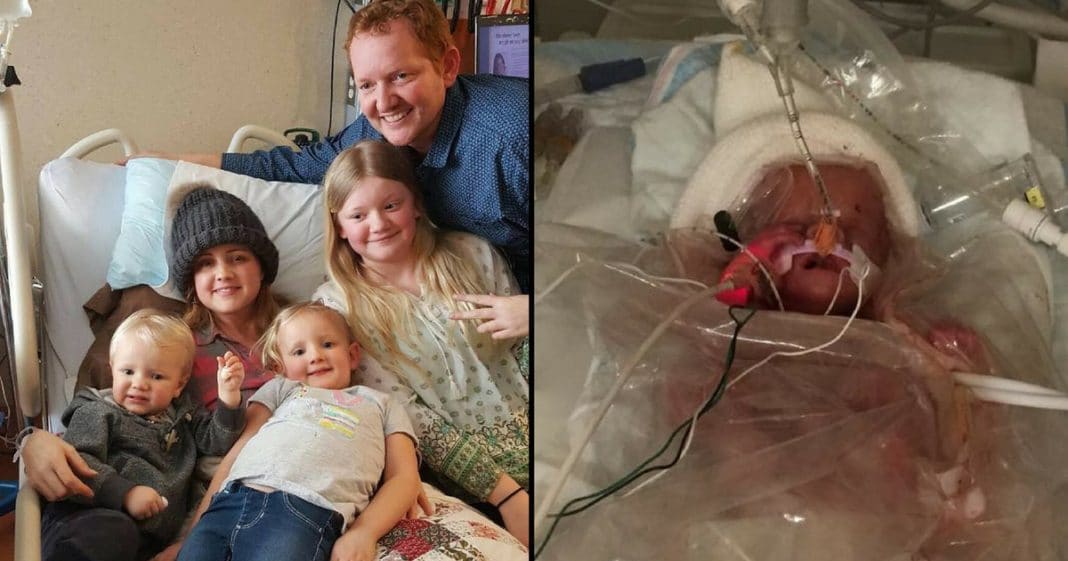 Michigan mom of five Carrie DeKlyen made headlines when she decided to forgo cancer treatment so her unborn sixth child would have a chance at life.

In April, Carrie was diagnosed with glioblastoma, an aggressive, rapidly growing malignant tumor that can affect the brain and spinal cord. She enrolled in a clinical trial at the University of Michigan in Ann Arbor and it was there doctors informed her she was pregnant.

They told Carrie she would need to terminate her pregnancy in order to receive the treatment, but the protective mother refused.

“The doctor said if you don’t terminate this baby, Carrie, you will die,” her husband of 17 years, Nick DeKlyen, said. “But it was Carrie’s decision and I said ‘What do you want to do?’ She said, ‘We’re keeping it.’”

While it was hard to come to terms with her decision and many people criticized her choice, Nick said he ultimately supported his wife.

“She’s going to miss us, but she knows this life is so quick and we’ll see each other again in Heaven,” he said. “Knowing that gives her hope and, I know it’s crazy, but I support her decision.”

While the family prayed for a miracle, Carrie’s health rapidly declined. Doctors had initially given her five years to live, but in the coming months that estimation shortened significantly.

In the four months after her diagnosis, Carrie underwent four major brain surgeries and suffered a stroke that left her in a vegetative state.

Doctors had hoped to wait until the baby, who the couple named Life, was 28 weeks along before they delivered her, but on September 6, due to health concerns, she was delivered via cesarean section. She was 24 weeks and 5 days.

Carrie was taken off life support after the birth. Sadly, she passed away just three days later.

Nick and the rest of the family were heartbroken, but they knew Carrie was happy to give her life for her daughter’s.

“I look at her face and know this is what she wants and it gives me comfort,” Nick said at the time.

However, in a tragic turn of events, little Life followed her mom into eternity, passing away at around 10:30 p.m. on Wednesday at the University of Michigan Hospital.

“It is with great sadness and a absolutely broken heart that I tell you Life Lynn passed away last night,” said a message on the family’s Facebook page. “Carrie is now rocking her baby girl. I have no explanation of why this happened, but I do know Jesus loves us and someday we will know why. The grief we feel is almost unbearable, please be praying for our family.

“Psalms 73:26 My flesh and my heart may fail, but God is the strength of my heart and my portion forever”

Carrie’s loss had been redeemed by the fact that Life had been given a chance to survive, but now the family is mourning the loss of both mother and baby and trying to make sense of this tragedy.

“We don’t have any answers,” Sonya said. “Maybe Carrie needed her.”

Our hearts break for this family who has endured so much and seems to be in the midst of a hopeless situation. We know, though, that not all hope has been lost. Before Nick’s passing, he said he was relying on his faith to get him through this difficult time.

“I know I’ll see her again,” he said, “not in this life, but after my time is up I’ll be with her again in Heaven. She made the decision to give Life a chance at life. And I couldn’t be more proud.”

The family said they will not be having a normal funeral for Life. They will be burying her with her mom on Friday. They have asked for continued prayers as they navigate this difficult time.

Will you join us in keeping this heartbroken family in your thoughts and prayers? So share this today with friends and family!.