Deployed Sailor Can’t Wait To See Family, Then He Notices A Strange ‘Bump’ 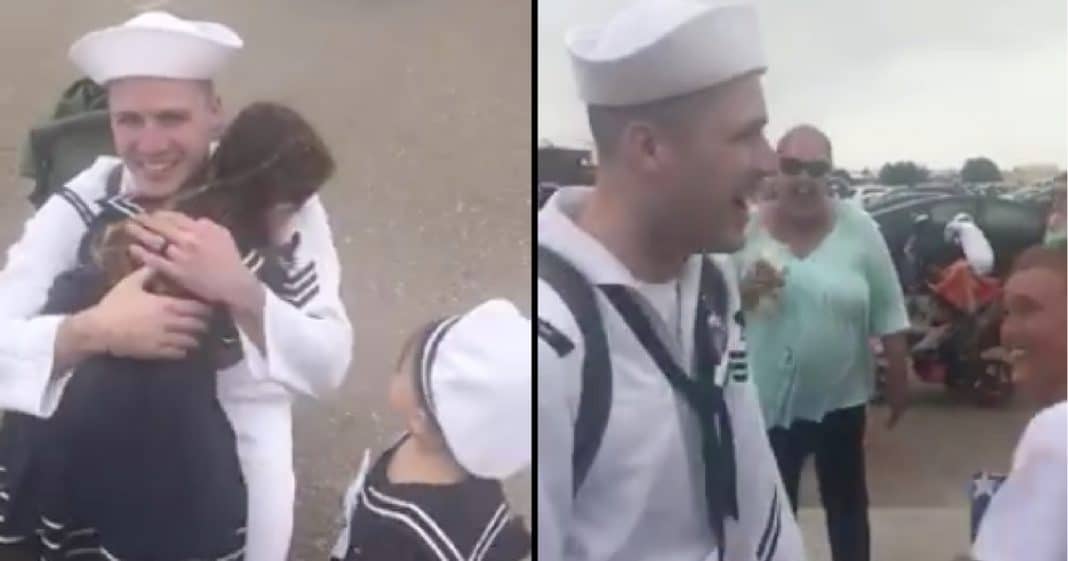 When you’re pregnant, usually one of the first things you want to do is tell your husband or partner and rejoice in the good news together! Lots of moms come up with cute and creative ways to break the big news to make the announcement even more special.

But when Temecula, California, mom Natasha Daugherty learned she was expecting again, she decided to keep her pregnancy a secret…from her husband!

You see, Natasha and her husband, Chris Daugherty, met when they were both in the Navy together and have been married for six years. Chris still has to go out on fairly regular deployments, which can be difficult for the family, but it has just become a part of their lives.

Chris had only been on his most recent deployment for one week when Natasha found out she was pregnant with their fourth child. She couldn’t wait to tell him, but she wanted to do it in a special way and not just over email.

“When I found out I was pregnant I knew he would be so incredibly excited and I wanted my reveal to him to be memorable and exciting,” she said.

That’s when she came up with an idea that some people might find a little crazy – she decided to keep her pregnancy a secret and surprise Chris when he returned home.

Keeping the big news from Chris wasn’t easy! When Natasha sent him pictures of the family she would come up with clever ways to hide her belly so as not to give it away.

Natasha also worried about something happening to Chris and him never knowing about his child. When the Navy extended Chris’ deployment by a month so his ship could anchor the carrier strike group that was being used to show a massive show of force off the coast of North Korea, Natasha debated breaking the news to him.

“I got emotional about it and I was wondering, ‘Should I tell him? Would I feel guilty if something happens and he doesn’t know?'” she recalled.

Ultimately, though, she decided to keep the baby a surprise, and all of the secrecy paid off when she and her family went to welcome Chris home.

As Chris hugged and kissed their kids, Natasha stood back holding a sign in front of her that read, “Welcome home baby daddy.”

When Chris walked toward her, Natasha asked him, “Do you like my sign?” and then whipped it away to reveal her large baby bump.

It took a minute for Chris to wrap his mind around what was going on. “Is that real?” he asked his wife as he hesitantly poked her stomach.

“I actually poked her belly because I wasn’t sure if she was playing a trick on me or not,” Chris laughed later. “Clearly, she was not.”

Chris can’t believe Natasha managed to keep the baby a secret from him for so long, but he is overjoyed at the new addition to their family.

The baby – a little girl – is due in August. Thankfully Chris doesn’t deploy again until January, so he will get to be there for the birth and soak up some precious time with his new daughter before he has to leave.

Did you love Natasha’s big surprise for Chris as much as we did? So share this!