Dad Builds Paralyzed Toddler Custom Wheelchair. You Have To See This Thing In Action! 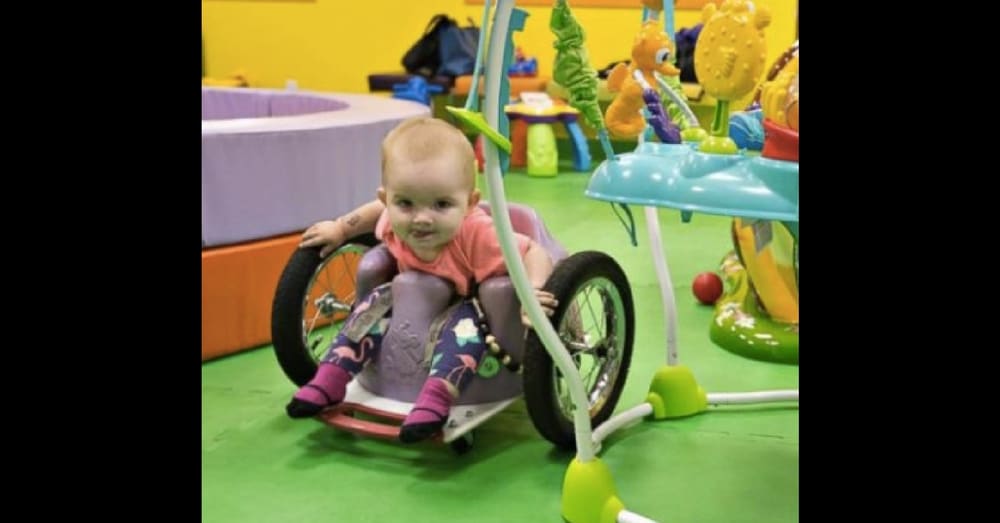 Finding out your child has cancer is one of the scariest and most difficult things a parent can go through. Watching your child suffer while you are unable to do anything to take the pain away is torturous.

Brad and Kimberly Moore of Edmonton, Alberta, Canada, know this firsthand – their daughter, Evelyn, was diagnosed with neuroblastoma when she was only 4 months old.

After eight rounds of chemotherapy Evelyn has been in remission for 3 months, but a spinal tumor crushed her spine and left her paralyzed below the arms.

Doctors told her parents that she would learn to army crawl and would be able to use a wheelchair later, but Brad and Kimberly wanted Evelyn to have as much mobility and normalcy as possible.

“There weren’t too many options that were available,” Kimberly said. “When my daughter was diagnosed, we were more worried about keeping her alive than getting the insurance to get [a wheelchair] covered. We saw something on Pinterest and Brad said he could build it. Within a day or two, it was done.”

Brad made the wheelchair with a cutting board, castor wheels, and a Bumbo chair, and he did it all for $100! Now Evelyn is able to zip around and explore wherever she wants. The wheelchair was also built to tip forward, so she can reach for her toys and other items.

“She’s pretty fearless,” Kim said. “She’ll go in her wheelchair on the top of a hill, let go and put her hands in the air, then catch herself when she gets to the bottom. She’s a good little baby. She’s been through a lot and she’s just trying to get back to what normal looks like.”

Pediatric oncologist Bev Wilson of Stollery Children’s Hospital, one of Evelyn’s doctors, said the wheelchair has made a huge impact on the little girl’s life.

“She’s very happy,” Wilson said. “She moves around and visits nurses she wants to see and other kids. She knows everybody. It’s made her mobile in a way she otherwise wouldn’t be able to be. She gets to explore what she’d want to explore. She’s like any other child, but she’s actually faster.”

So fast, in fact, that the Moores had to install a speed bump in their home to slow her down!

“Her true person comes out when she’s in that chair,” Kimberly said. “She has the same interactions as any other child would, being at eye level and exploring the world on the ground… That’s what she is able to do in moving around. It’s pretty exciting.”

Were you amazed at what this dad built for his daughter? So share this!