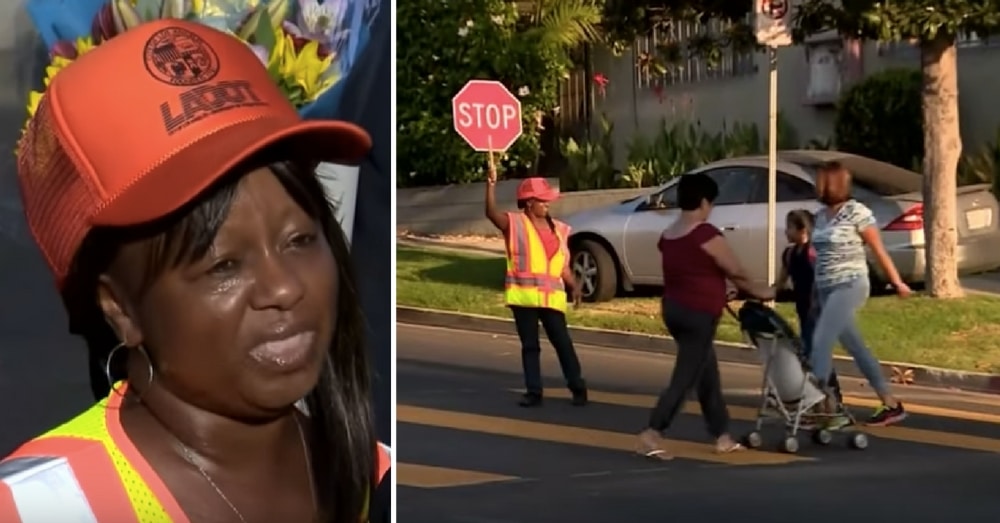 Crossing guard Adrian Young had just finished her shift at Alexandria Avenue Elementary School in Los Angeles and was about to head home when she heard a little girl screaming something that left her cold.

Adrian looked over to see a woman trying to drag the 8-year-old girl away.

She immediately sprang into action.

“I kind of went into mother mode,” she said, “because I couldn’t see myself letting this little girl be taken.”

Adrian herself is only 4-feet-8-inches tall, and she knew she and the little girl were outmatched by the much larger woman. She told the girl to just hold onto her as tight as she could.

“I just told her to grab onto me as tight as she could,” Adrian said, “and I held onto her and the lady just began to attack me, so I just thought about attacking her to make sure she can’t take this little girl.”

Thanks to Adrian, the woman finally let the girl go. Police were able to find the woman, identified as 50-year-old Maria Ramirez, and charged her with one count of felony kidnapping.

Now Adrian is being hailed a hero.

Los Angeles City Council member Mitch O’Farrell honored Adrian at a public event, saying, “Sometimes superheroes come in small packages. And because of her diligence, training and awareness, and just because she cares so much about children, she prevented what could have been a kidnapping of a child.”

The young girl’s mother, Sharon Arellano, will forever be grateful for Adrian’s courageous act of heroism.

“If it wouldn’t have been for her I wouldn’t know where my daughter would be right now,” she said.

Both Sharon and Adrian are fighting for the school to implement more stringent safety measures so nothing like this will ever happen again.

Do you think Adrian is a hero? So share this!