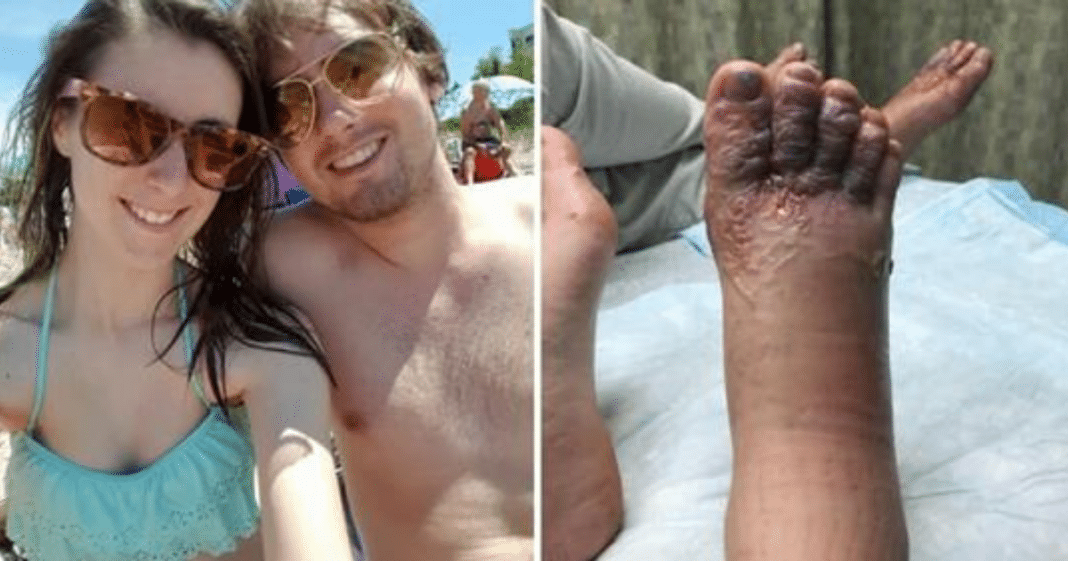 There is nothing more healing and rejuvenating than a trip to the beach. The sunshine, the surf, the walks in the sand near the glimmering water – It’s heaven.

That’s what Canadian couple Eddie Zytner, 25, and Katie Stephens, 22, expected when they went on vacation to the Dominican Republic. They enjoyed a stay at a resort near the beaches of Punta Cana. However, soon after they made it back home, they were both walking on crutches with disfigured and hideous looking feet.

We all expect to experience some bug bits when we walk on the beach, and this couple was no different. It’s usually just a minor nuisance.

“For a lot of our trip, we found that we were scratching our feet quite a bit,” Zytner said. “Sand fleas we had heard about, so we kind of assumed it was that at first.”

The couple enjoyed their break even with the irritating scratching and headed back home. That’s when those itches turned into something much more severe. Zytner’s feet started to swell up with painful blisters and bumps started forming on his toes. Then Stephen’s feet started doing the same thing.

They started freaking out. The pain became so bad they couldn’t wear any socks or shoes and had to move around with crutches.

After a trip to three different doctors, the couple learned that they had some unexpected souvenirs from their trip which had burrowed down into their skin. While walking on the sand, hookworm larvae had decided to start a vacation of their own in the couple’s feet.

They were both diagnosed with cutaneous larva migrans thanks to one doctor who recognized what was going on.

“When I went back to the hospital Monday we were very, very fortunate the doctor in the ER had seen this before – 10 years ago and from a tourist returning from Thailand,” wrote Zytner.

Canadian couple gets hookworm on vacation to the Dominican Republic, then has to go to the U.S. to get medicine to treat it https://t.co/nRflqHQDjW pic.twitter.com/3ybLw6hVQZ

Stephen explained what happened at the beach.

“How you get the parasites is from dog and cat feces,” she said. “So basically you just have to watch out on the resort if there are stray cats and stuff. We noticed at our resort that there were a lot of cats there.”

To make matter worse, the drugs they needed to cure their parasitic infection were not available immediately in Canada.

Hookworms are most prevalent where it is tropical and sunny, so the drugs to kill them, albendazole and ivermectin, proved difficult to get in the cooler north. Since the drugs are so rarely needed, they were not licensed in Canada and had to be ordered on a case-by-case basis.

The couple freaked out all over again.

“We found out that Health Canada had denied our request to receive the medication saying our case wasn’t severe enough. At that point, that’s when we freaked out a little,” said Stephens.

A Canadian couple got infected by hookworm while walking on a beach — here's what to know about the parasites https://t.co/LCcwd8udKs pic.twitter.com/ITMuAj3zVu

Zytner’s mother drove to Detroit to pick up the ivermectin, paying CAD $88 according to CTV News.

A week after beginning treatment, their symptoms improved and they were able to walk without crutches again. After their story went viral on social media, the couple gave some advice to other beachgoers:

“Call the resort they’re staying at and see if they clean up all the beaches.”

Keep in mind, it’s not just outside the United States where this can happen. We covered a similar story about Michael Dumas, a 17-year-old from Memphis Tennessee, who was left with permanent scarring after a trip to Miami with a church group.

When in doubt, wear shoes and stay off the sand with a beach towel.

See what happened from the Windsor Star below:

Windsor residents Eddie Zytner and his girlfriend Katie Stephens never imagined their trip to the Dominican Republic would result in hookworm infections for both of them. pic.twitter.com/4EjnFNjrrg