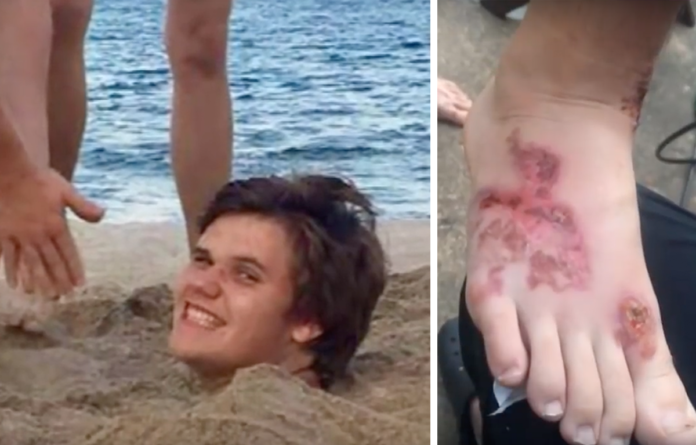 Most of us have memories of being at the beach and watching and laughing as a friend is buried up to the neck in sand. Almost all of us who have traveled to the ocean remember how wonderful it is to walk barefoot in the sand. What many of us probably never realized is that skin contact with the sand can sometimes lead to a serious infestation with parasites: hookworms.

That’s what Michael Dumas, a 17-year-old from Memphis Tennessee, found out the very hard way. He traveled to Miami for a mission trip and was enjoying a day at nearby Pompano Beach on June 20, which was his birthday. His friends made the spontaneous decision to bury him in the sand, not knowing the danger that was lurking under the surface.

Michael and 6 others out of 17 in the church group got hookworms. They most likely came from an infected dog that had been on the beach. The larvae, which have hooked mouths, burrowed into their skin.

Michael’s case was the “worst case by far,” according to him mother Kelli.

“One of them was three inches long,” recalled Kelli.

His mother recalled that when her son returned home, he slept all weekend and was suffering from an ear infection.

“I blamed it on being on the mission trip. I know now that is a sign of hookworm infection,” wrote Kelli.

Then he developed some marks on his upper thigh and backside that looked like insect bites. They chalked it up to the day at the beach without taking it seriously. Then it got worse.

On July 1st, he sent his mother a picture of his feet with some scratch marks. They attributed it to yard work. However, by July 6, he was having trouble sleeping due to all the itching.

After a trip to the doctor, he received antibiotics, but then the pediatrician called on July 10 with the bad news: he had cutaneous larva migrans –hookworms.

Michael was treated with two anti-parasitic medications and cryotherapy with liquid nitrogen on the affected areas.

“Hookworms burrow into your feet and then cruise under your flesh upwards. Michael could feel them moving, trying to get away from the cryotherapy. It was horrible.”

Following the treatments, his skin looked blistered and then he developed a Staph infection that needed immediate treatment as well.

He was unable to leave the house, and couldn’t wear shoes or socks.

He would miss the church camp he had attended since 4th grade. He plans to be there for his sister’s August 11 wedding.

Kelli says that six weeks out her son is still suffering.

“He will have permanent scars on his body. He has trouble walking. He limps from the pain. His sister is getting married August 11th and he is a groomsman. A sockless, shoeless groomsman might not look so great for the wedding album, but I just want him well and there is no end in sight. We are 6 weeks out. The Health Department in Pompano Beach said ‘Everyone knows to wear shoes on the beach because you can get parasites.’ I assured them everyone does NOT KNOW THAT!!

Please pray for us.”

It’s a wake-up call warning for all of us who have taken for granted that we can enjoy the beach without concern.

You don’t have to be buried in sand to be susceptible to infection. It’s possible to be infected if you walk barefoot and happen to cut yourself on something like a seashell fragment or debris. Then the parasites find an easy point of entry beneath the skin.

The Washington Post featured a video explaining what happened to Michael, explaining the range symptoms people can expect if they are infected.

Unfortunately, the symptoms could apply to a number of health issues. So the next time you are at the beach, and particularly where dogs are allowed, it might be best to wear water shoes and to avoid too much skin contact with the sand.

“Some people do not experience any symptoms.
Others experience itchiness and rashes on the skin.
Severe cases can cause abdominal pain, diarrhea, loss of appetite, and weight loss.”