Couple Mocks Struggling Mom At Walmart. That’s When A Stranger Steps In 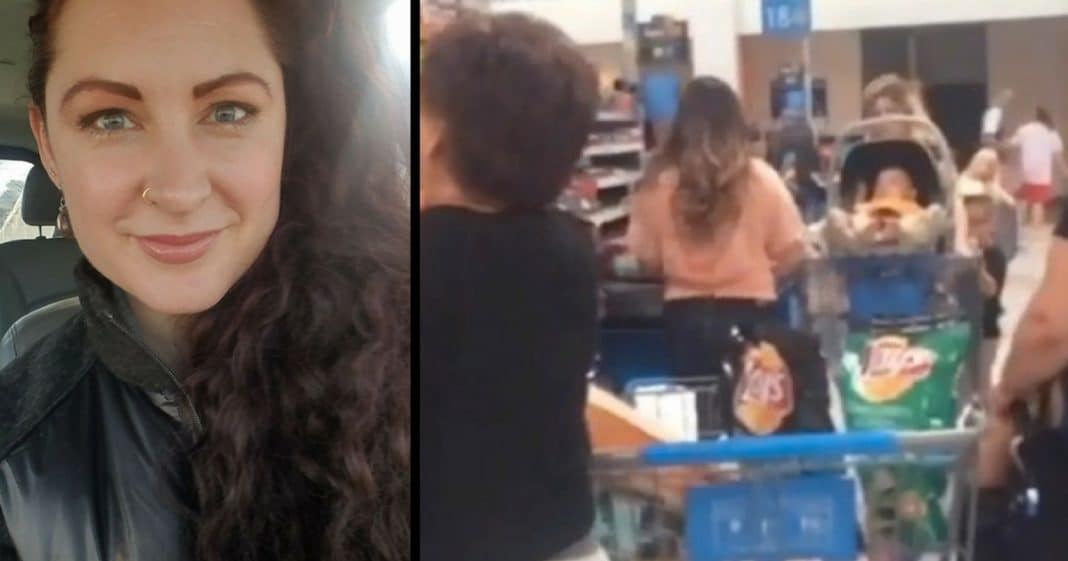 You would think that most people watching a young mom with five kids struggle in the checkout line at Walmart would show some compassion and maybe even offer to help, but unfortunately people don’t always act the way we hope they would.

Lindsay Rae was in line to check out at Walmart when she noticed a scene that broke her heart.

In front of her was a woman trying to wrangle five kids as she unloaded her cart onto the conveyor belt.

Lindsay herself is a mom of nine – two biological and seven adopted – so the scene was a familiar one to her. What happened in line behind her, though, caught her off guard.

A well-dressed couple who were also waiting in line began to loudly whisper rude comments about the struggling mom.

“How many baby daddies do you think she has?” they asked, noticing that the kids were a mixture of Hispanic and Caucasian.

“Can’t even dress those kids for weather,” they mocked. “Just wait until she whips out the food stamps.”

Then, when the woman did pull out a food stamp card, they dramatically sighed.

“There’s our tax dollars neatly at work,” they mocked.

Yes, it was true the darker-skinned children were wearing shorts and flip flops in the cold weather, and the woman was using food stamps, but Lindsay suspected there was more to the story than what first met the eye.

She shot the couple behind her a “death glare only a mother of 9 can execute to perfection” and then turned to the woman in front of her.

“Can I help?” Lindsay asked the woman. “These things are so confusing.”

Then she quietly asked, “Foster or adopted?” adding, “I have 9 kiddos…two bio, I get it, please let me help.”

The embarrassed woman smiled at her.

“New foster mom,” she told Lindsay. “This is my first time using one of these. [The kids] came 3 days ago, gonna be with us for a while.”

She explained that she had been given food, but the kids had no winter clothes and the stipend hadn’t come through yet.

Lindsay explained how the card worked and helped the woman finish up her transaction. Then she looked at the kids, smiled, and turned back to the woman.

“Beautiful children,” she told her. “I am glad you all have each other.”

As the woman handed the kids their new coats and headed out the door, Lindsay hugged her and told her, “You have got this.”

But Lindsay wasn’t done yet. As soon as the mom and her kids were out of earshot, she turned to the rude couple who were still chortling behind her.

“Those children? They lost the right to live with their parents just days ago,” she told them. “Those clothes? Probably the only clothes they own, or got to leave their home with. THAT woman? Opened her home to kids, kids that needed a safe place to go when the one they lived in no longer proved safe enough or secure enough for them. The food stamps, something health and welfare [gives to help a mother of] two feed three new mouths. There are not nearly enough women or people like her this world.”

Lindsay started putting her groceries on the belt, then turned around to say one more thing, her voice shaking:

“AND even IF those kids were all hers, and she had a dozen ‘baby daddies’ and was on food stamps..no child in this country or any other deserves to be cold or hungry, I am sorry, but your behavior? Poorly done, VERY poorly done.”

Speechless, the couple quietly left the checkout line and went to another.

As she finished putting her groceries on the belt, the girl checking her out smiled and winked.

“Single mother on WIC,” she told Lindsay. “What you said? Rocked!”

As Linsday loaded her groceries into her car and buckled her own baby in, she began to weep. She knew she had to share her story to encourage other foster moms to keep doing what they are doing and to open other’s eyes to see that there is often more to the story than what is first evident.

“You foster mama’s out there…hold your heads high,” she wrote in a Facebook post, “you are the hands and hearts that are the strong and the steady for small ones when they need it most. Hats off and so much love today to you.”

Do you think Lindsay did the right thing in confronting that couple? So share this!