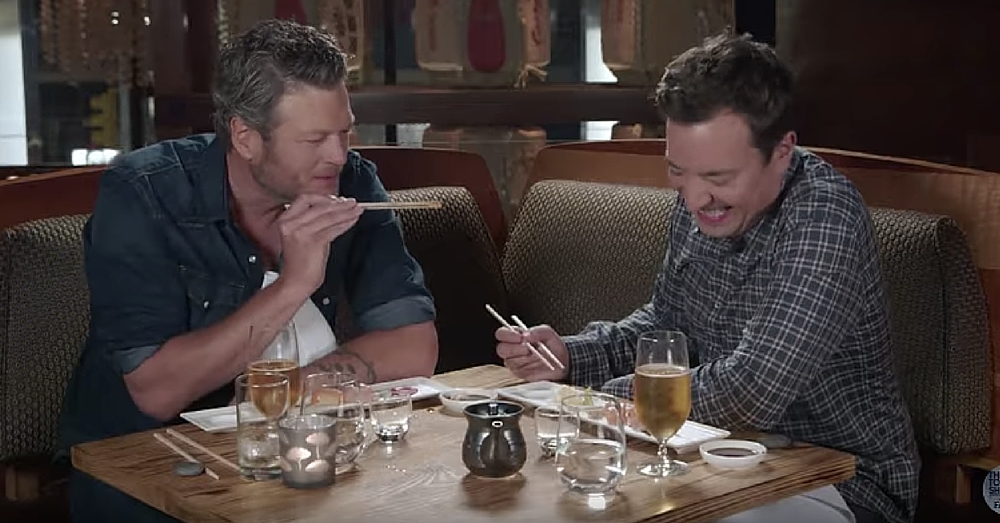 When The Tonight Show host Jimmy Fallon found out that country singer and coach on The Voice Blake Shelton had never tried sushi before, he decided to take him on an adventurous food tour at New York hotspot Nobu. The hilarious footage aired Tuesday night on Fallon’s show.

Shelton was skeptical from the beginning, looking warily at the warm towel brought to clean his hands before Fallon assured him it was for cleaning, not eating, but he tried everything that was brought to him like a champ.

They started the night off with some sake. “It’s rice wine,” Fallon explained before Shelton drank, but the singer insisted it tasted more like “Easter egg coloring.”

Next they tried some pickled ginger, sushi, and sashimi. Shelton liked the first piece of sushi he tried – “The texture is Play-Doh, but I will say this, man to man, I like how that tasted” – but wasn’t such a fan of the rest.

After all of that, the waitress brought out a dish that even Fallon was wary to try. Shelton ended up eating it first and then had to egg Fallon on to try it.

To see what dish made the TV host squeamish, and to watch the rest of this hilarious dinner, click on the video below!

Did you find this encounter as hilarious as we did? So share this!