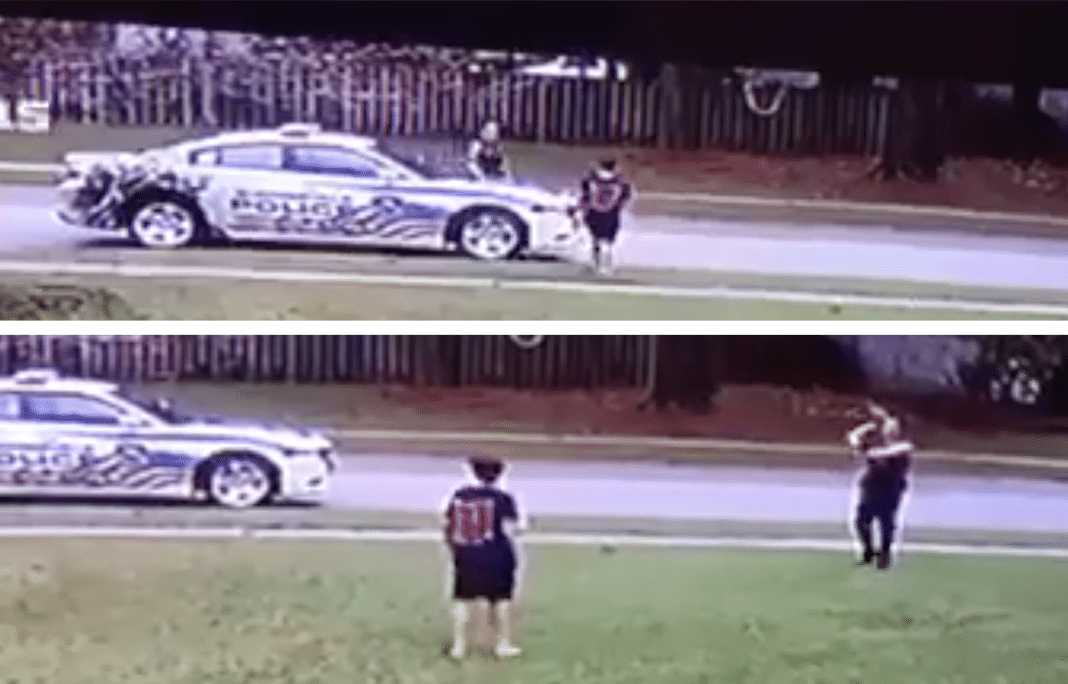 Who wouldn’t love to go back to a more innocent time, like that depicted in The Andy Griffith Show? Andy Taylor is sheriff and he’s always doing the right thing as he interacts with just about everyone in the town of Mayberry. It seems like days like that are long gone, but not if you look closely. Reminders of times like that are still there amid all the negative news.

For example, the police department in the Summerville, South Carolina area has been making news frequently over the years. We’ve shared the stories about Officer CJ Mullinax from the Horry County Police Department in the Myrtle Beach area. He has been caught on video buying food for the homeless or playing football with the local kids. Countless people have been touched by these small gestures of kindness.

Further down the coast in Summerville, a video of Officer T. Bilancione is making people smile with his own small act of kindness. A boy was out playing with a football barefoot when his police car came to a stop. The home had a surveillance camera and captured what happened next.

The parents were happy to see that Officer Bilancione took a moment out of his day to pass the football with their son. It was a small gesture but one that made an impact on the boy and his family. The family sent a note of thanks to the police department.

“My son was throwing the football up to himself in the yard and your officer noticed and stopped to play for a couple minutes.”

It might seem insignificant, but it really made an impact on the boy:

“This made my sons day and I wanted this officer to know…. he rocks!!!”

The Summerville Police Department shared the video on Facebook and gave a special shout-out to Officer Bilancione. (See below)

We would like to throw a shout out to one of our outstanding Police Officers, FTO. T. Bilancione, who was captured on surveillance camera outside of a resident's home tossing the football with a boy. This text below was what was sent to us by his parents. "My son was throwing the football up to himself in the yard and your officer noticed and stopped to play for a couple minutes. This made my sons day and I wanted this officer to know…. he rocks!!!".Thank you to all of the fine men and women who are apart of our team, such as FTO. Bilancione. #SPDPRIDE

The post went viral and many people heaped praise on the officer for what he did. One person commented:

“This one thing as an officer of the law will impact this young man’s life because he took the time to throw a ball !!! May seem small but Huge just Awesome!!!!!”

Another person claimed to be the officer’s former employer:

“Love this dude. He worked for me for a while, had to force him to take some time off. He loves this profession.”

It looks like the police in South Carolina recognize they can be positive role models in their community. As often is the case, it’s the little things we do when we think nobody is looking that really determine our character. Officer T. Bilancione showed his true colors that day with a random act of kindness.