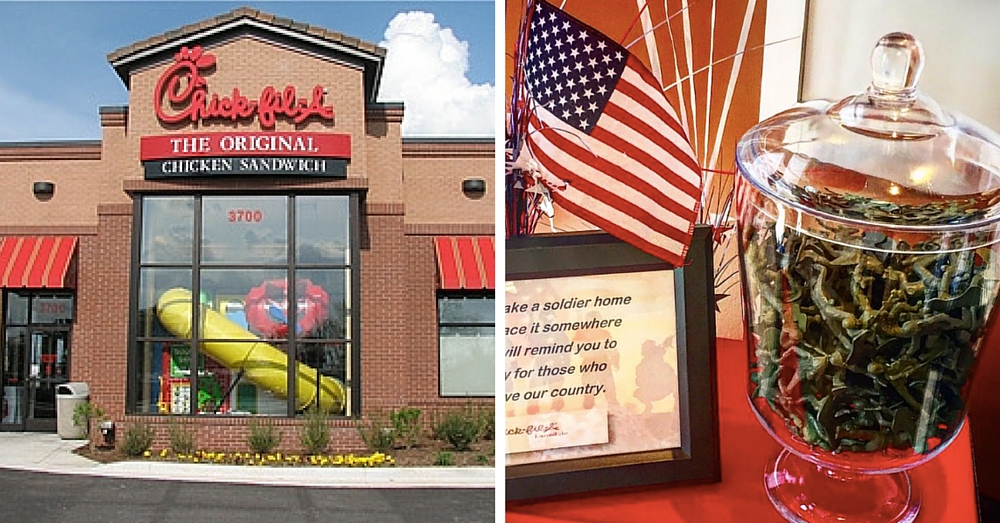 In honor of Memorial Day and all the soldiers who have given their lives for freedom, Chick-fil-A restaurants across the United States are putting out some unique displays that have touched the hearts of many of their patrons.

Several locations have set a “Missing Man” table to honor the fallen.

The caption explains the significance behind each piece of the table setting:

“This table is reserved to honor our missing comrades in arms. The tablecloth is white — symbolizing the purity of their motives when answering the call of duty. The single red rose, displayed in a vase, reminds us of the life of each of the missing and their loved ones and friends of these Americans who keep the faith, awaiting answers. The vase is tied with a yellow ribbon, a symbol of our continued determination to account for our missing. A pinch of salt symbolizes the tears endured by those missing and their families who seek answers. A slice of lemon on the plate reminds us of their bitter fate.The Bible represents the strength gained through faith to sustain those lost from our country, founded as one nation under God. The glass is inverted — to symbolize their inability to share this evening’s toast. The chair is empty — they are missing.”

A Chick-fil-A in Philadelphia, Pennsylvania, laid out a similar table, but with a few differences, explaining:

“We use a small table to show one soldier’s lonely battle against many. We cover it with a White Cloth to honor a soldier’s pure heart when he answers his country’s call to duty. We place a Lemon Slice and Grains of Salt on a plate to show a captive soldier’s bitter fate and the tears of families waiting for loved ones to return. We push an Empty Chair to the table for the missing soldiers who are not here. We lay a black napkin for the sorrow of captivity, and turn over a glass for the meal that won’t be eaten. We place a white candle for peace and finally, a red rose in a vase tied with a red ribbon for the hope that all our missing will return someday. ‘You are not forgotten so long as there is one left in whom your memory remains’”

While Missing Man tables have become a tradition to commemorate the lives of fallen soldiers, a few Chick-fil-A locations are doing something a little different to remind their patrons to pray for those who have fallen as well as those who are still serving. In addition to setting the table, the Philadelphia restaurant set out a container of toy soldiers for their patrons to take home as a reminder. The caption reads:

What do you think of Chick-fil-A’s efforts to honor our fallen soldiers? So share this!