Car Breaks Down On Way To Funeral, Then Mechanic Turns Everything Around 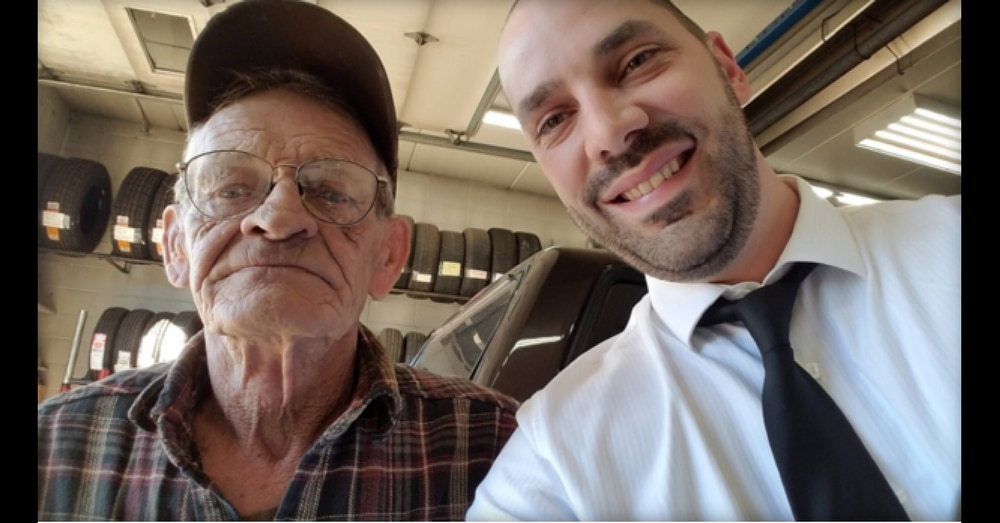 It had already been a tough day for Todd Steinkamp and he wasn’t even close to being done yet.

The Iowa man was on his way to a funeral in Green Bay, Wisconsin. He had already driven 300 miles and had about 70 more to go when an awful metal-on-metal sound coming from his car let him know he needed to pull over.

He had been taking mostly back roads and pulled into the first town he could find – Wild Rose, population 725.

Todd knew the odds of finding a mechanic to help him were slim at 7 a.m. on a Monday, but he spotted a small convenience store called Lauritzen Sports which was connected to an auto shop and decided to try his luck.

When he walked into the store he spotted an elderly man stocking shelves. Todd tapped him on the shoulder and asked if he knew anyone who could help.

“I’m the mechanic here,” the man, whose name was Glenn, told him. “What are you all dressed up for?”

When Todd explained that he was on his way to a funeral, Glenn told him to pull his car around back to see if he could fix it.

It turned out there was a problem with the wheel bearing. Glenn said he could fix it, but it would take a couple of hours to get the part.

Todd asked if he could rent a car, but being that the town was small they only had one car for rental and it wasn’t available that day. The next closest rental place was 40 miles away.

Todd began to panic. He had no idea how he was going to make it to the funeral.

“I was distraught,” he recalled. “Pretty pathetic really.”

Then Glenn did something that left Todd completely stunned.

“Take my truck,” he told Todd, handing him the keys. “Fill it up with gas, don’t turn on the emergency lights and get going. She’ll do 120mph if you need it to.”

Glenn wouldn’t take no for an answer, so Todd hopped in the truck and drove the rest of the way to the funeral, making it just in time.

Seven hours later, Todd was back in Wild Rose to return the truck. He ended up staying a while and talking with his guardian angel.

Those who know Glenn say his actions that day aren’t at all surprising.

“That’s my grandpa!” Lisa Spreitzer commented on Todd’s Facebook post of the story. “And he probably doesn’t even think what he did was a big deal. He’s truly amazing. (I already knew that. Now the world gets to know).”

Todd said that since the story has begun to pick up traction on social media many people have gone out of their way to stop in Wild Rose and see Glenn, and the 74-year-old mechanic is loving every minute of it!

As for Todd, he said he learned a lesson that day that will stick with him for the rest of his life: “Just be kind and help if you can.”

Were you touched by what Glenn did for Todd? So share this!