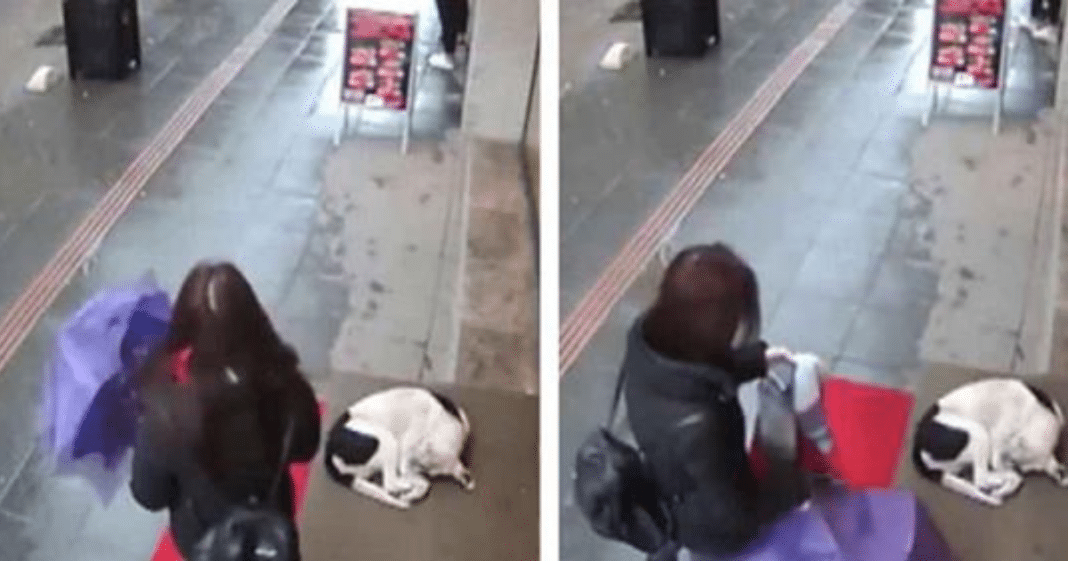 It only takes a moment to do a little bit of good in the world, as evidenced recently when a woman in Turkey was caught on closed caption TV giving up her own scarf to cover a freezing, shivering stray dog.

Duygu Elma was leaving a cafe on a cold rainy night in Zonguldak, Turkey, when she saw a stray dog curled up on the sidewalk under the overhand to the cafe. You can see Elma’s indecision in the video. She had opened her own umbrella but couldn’t seem to move her feet forward to keep walking.

She did what many animal lovers would do, but sadly, something that most people would never think to do. She stopped, put down her umbrella, and removed the scarf from around her neck to cover the helpless little dog. Watch the video below, which went viral when it was uploaded to Facebook.

A friend identified Elma from the video.

Elma herself was shocked that her actions received so much attention.

“I couldn’t imagine that my actions would receive this attention. I’m very surprised about it. The weather was so cold. I just couldn’t take it when I saw him shivering.”

Elma hopes that there are other people looking out for the poor creature. She’s hopeful that her kind actions going viral will inspire others to take just a moment out of their day to make the world a better place in some tiny way.

Kindness to vulnerable abandoned animals warm our hearts. It’s so easy to simply be kind. Like Elma, we hope her story inspires others.