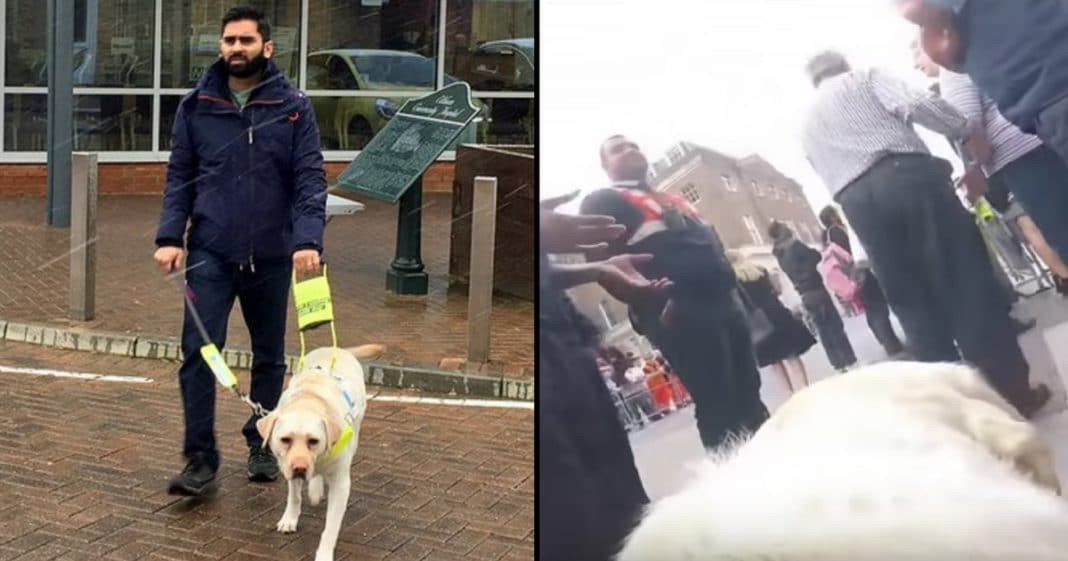 Blindness is a difficult disability for anyone to bear, but it can be especially hard for those who lose their sight later in life. People who were born blind have learned how to get around in the world from the time they were babies, but when someone goes blind as a child or adult, they have to relearn how to do everything.

That is what 37-year-old Amit Patel discovered when he went blind five years ago. Amit suffers from a condition called keratoconus, which affects the cornea, and he lost all vision.

To help him get around, Amit was paired with a guide dog named Kika. She helps him get where he needs to go and keeps him safe, but Amit admits he still often feels like a “scared little boy in the corner.”

One would expect that people seeing a blind man would go out of their way to show kindness and to help, but sadly, Amit has found that is not the case. In fact, people openly mock him and make things more difficult for him.

Amit decided to attach a GoPro camera to Kika’s harness to see if he was just imagining things or if people really were treating him as badly as he thought. Every day as they walked around London, Kika would be secretly recording the goings-on of the day.

When Amit got home he would upload the footage for his wife, Seema, to watch, and what she found left her furious and heartbroken.

The camera captured a woman on a train putting her bags on an empty seat so Amit couldn’t sit next to her.

It captured people sitting on the train watching Amit and Kika walk by without offering their seats.

It captured people hitting Kika with bags and umbrellas when they were on an escalator so she would move and they could get past.

It captured empty taxi cabs zooming past Amit as he tried to hail one down.

It caught train station employees ignoring Amit for several minutes as he tried to find someone to help him find the right train.

Amit explained why he started recording his daily walks in the first place:

“It all started when people barged me out of the way [on the escalator],” he said. “They have loads of space to get past, but they seem to think it is fun to barge into a blind person. Kika always sits to my lefthand side so we often block the escalator, and people will hit her with bags and umbrellas to get her to move out of the way.”

Amit said he has even had strangers demand he apologize for holding them up.

Thankfully, faithful Kika is by his side. She has already proven that she would sacrifice her own life to save his.

One day as Amit was going through a crosswalk at an intersection, a car ran a red light and barreled toward him. Thinking quickly, Kika put herself between Amit and the speeding car.

“She saw the car and she got in front of me and took the hit,” Amit said. “The car grazed her nose. It was three days before she could work again.”

It breaks our hearts to hear how cruel people can be. As humans, we should show love and care to our fellow human beings and lend a helping hand wherever it is needed.

Amit hopes that by sharing his story and the shocking footage he has captured, people’s eyes will be opened and they will be more compassionate toward those with disabilities, along with everyone else they come across.

Were you shocked by the way these people treated Amit and Kika? So share this!