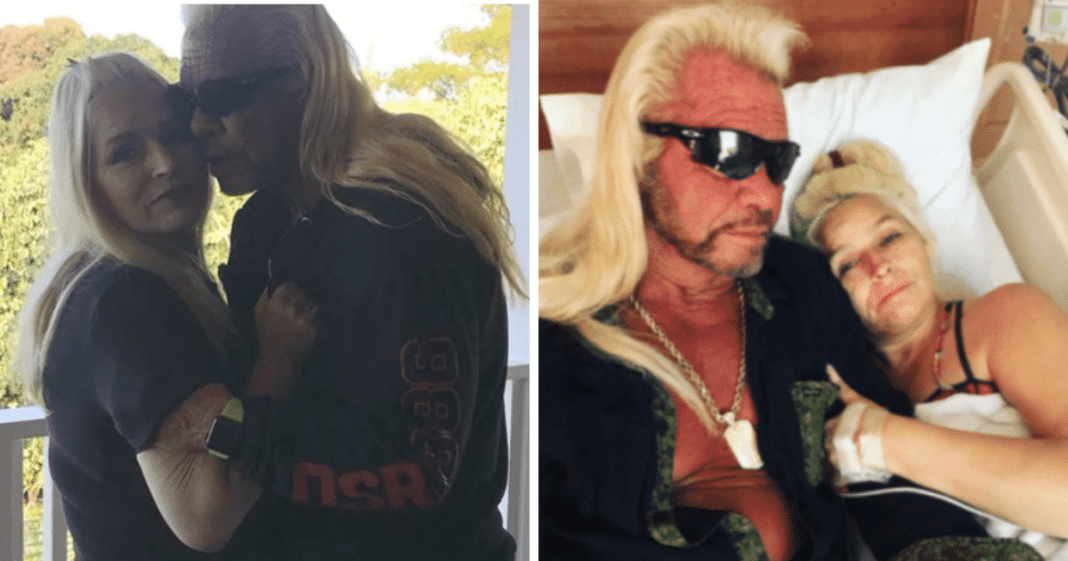 Duane “Dog” Chapman and his wife Beth have been asking for prayers as Beth confronts “incurable” cancer, for which she has had to have an incision cut so that she can continue to breathe. Despite facing the horrors of cancer the couple remains deeply in love through it all.

On Beth’s Instagram account, she shared a picture of the couple embracing on a porch with tropical foliage in the background from Hawaii Kai, Hawaii. The caption reads:

“Sooooo in love with this guy !”

Sooooo in love with this guy !

Thousands of fans shared their prayers that Chapman could be cured against the odds.

In a more recent post, she looks happy and stylish in a pair of sunglasses and a hat. One might never suspect the suffering she has endured with grace despite recently undergoing multiple rounds of chemotherapy in Los Angeles.

In another post, Chapman shares an image with a caption of determination:

“Come on! We’ll beat this cancer together! I’ll pray and you will fight! Okay?!”

In December, we shared an update as we asked our readers for love and support for the beloved couple. Beth endured emergency surgery on November 27 at a Los Angeles hospital after doctors found that her throat cancer had returned after over a year of remission.

When approached by reporters, Dog asked for prayers for his wife, who he said was not doing well. He was emotional and unable to talk more about his wife at the time.

“I APPRECIATE THE QUESTION AND PLEASE SAY A PRAYER. SHE’S NOT DOING GOOD.”

Dog the Bounty Hunter’s Instagram account shared a picture as he formed a prayer circle for his wife, who is 51.

We pray for Beth

A post shared by Dog The Bounty Hunter Team (@dogthebountyhunterteam) on Dec 2, 2018 at 3:56pm PST

In February, Dog treated Beth to a custom bouquet of roses on Valentine’s Day. She shared the picture on Instagram and tagged her husband with the caption:

Despite undergoing treatment, the couple continues to stay busy. Dog says Beth still has “her sense of humor” through it all. The family attorney told In Touch Weekly that they are even continuing to film episodes of their new show.

“The Chapmans have a lot on their plate right now,” the family attorney continued. “They just started filming for the new WGN show while Beth’s been going through treatment. It hasn’t been easy, but they are keeping a great outlook and Beth is one of the strongest women I know.”

From a video shared on Instagram, it looks like a new season of Dog’s Most Wanted will be intense, as Dog teams with “The Dirty Dozen” to bring down the FBI’s most wanted criminals. Beth will join him on the show.

We wish Dog and Beth all the best and send our prayers that she stays positive and beats cancer!!