After 67 Yrs Of Marriage, Wife Holds Husband’s Hand As He Takes Final Breath. Hours Later She Passes Away 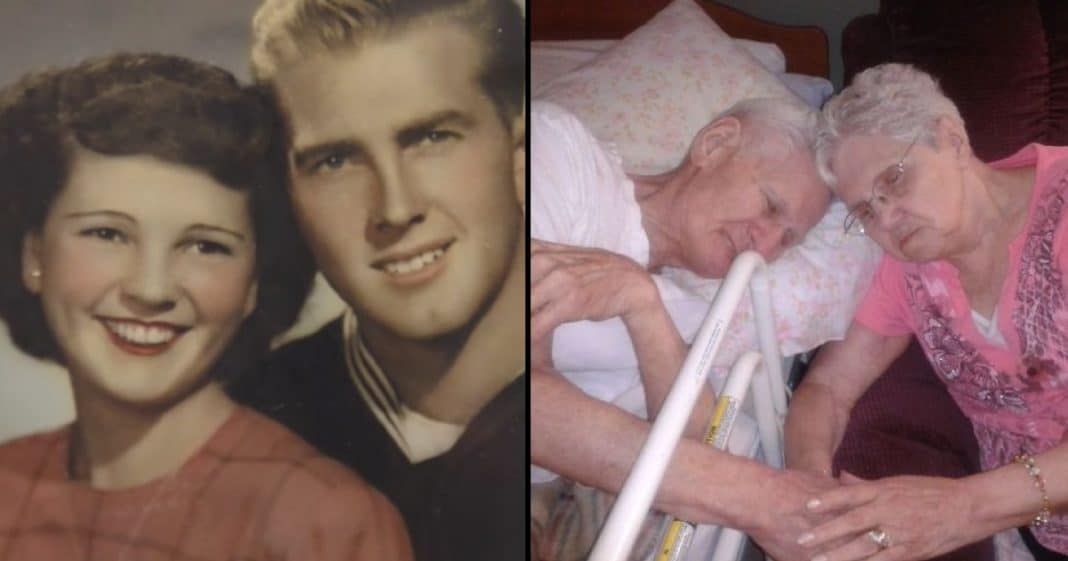 Anyone who has been to a wedding knows the famous part of the wedding vows: “Till death do you part.” The words are meant to convey the strength of the bond this couple now shares – they are in it for the long haul, come what may.

Sadly, these vows are often broken. But for some special couples, not even death can part them.

Such was the case with Floyd and Violet Hartwig.

The pair met when they were in grammar school. After graduating from high school, Floyd enlisted in the Navy, but when he was home on leave he reconnected with Violet and the rest, as they say, is history.

They married on August 16, 1947, moved to a ranch in Easton, California, and spent their lives working side by side and raising three wonderful children together.

“I think the thing that we think about them the most was how hardworking they were,” recalled the couple’s daughter, Donna Scharton. “They worked side by side chopping cotton, feeding turkeys, and supporting each other and supporting the children. And you had a sense that they had a connection, and I think that connection just came more and more, especially in the last months of their lives.”

But time marches on, and as Floyd and Violet got older their health began to decline. Violet suffered from dementia, and her health kept getting worse and worse.

Even though Floyd had health problems of his own, his concern was always for his wife. Donna recalls that Floyd was barely able to stand up and walk more than a few feet without running out of breath, but the only thing that mattered was his wife’s health and comfort.

Donna remembers taking them to the doctor one day and Floyd saying, “I’m okay. I want her fixed.”

As Violet’s health continued to decline, the family began to discuss getting her hospice care. Then they got a call from the doctor that left them stunned.

Floyd had kidney failure. The doctor only gave him two weeks to live.

Since he had to go to the hospital, the family brought Violet there so the pair could spend their final days together.

When they knew Floyd’s time was drawing near, the whole family – three children, four grandchildren, and ten great-grandchildren – surrounded the couple.

It was clear Floyd was in intense pain and didn’t have much time left, so the family pushed the couple’s hospital beds close and put their hands together.

Donna says her father fought until the very end because he didn’t want to leave his bride, but eventually his body gave out and he passed away at the age of 90.

Just five hours later, Violet followed her husband. She was 89.

As heartbroken as the family was to lose Floyd and Violet within just hours of each other, they know this is what the couple wanted. They had always told their children that it was their desire to die at home and together.

“We felt blessed because that’s what they wanted,” Donna said through tears. “It was meant to be, and that’s the only way it could end.”

After 67 years of marriage, Floyd and Violet got the sad but beautiful ending they had always wanted.

“They never ever asked for anything,” Donna said. “All they ever wanted was their family, and it was amazing that they got that in the end.”

Were you touched by Floyd and Violet’s sad but sweet love story? So share this!