Abused dog just days from death, then fed-up neighbor takes matters into his own hands 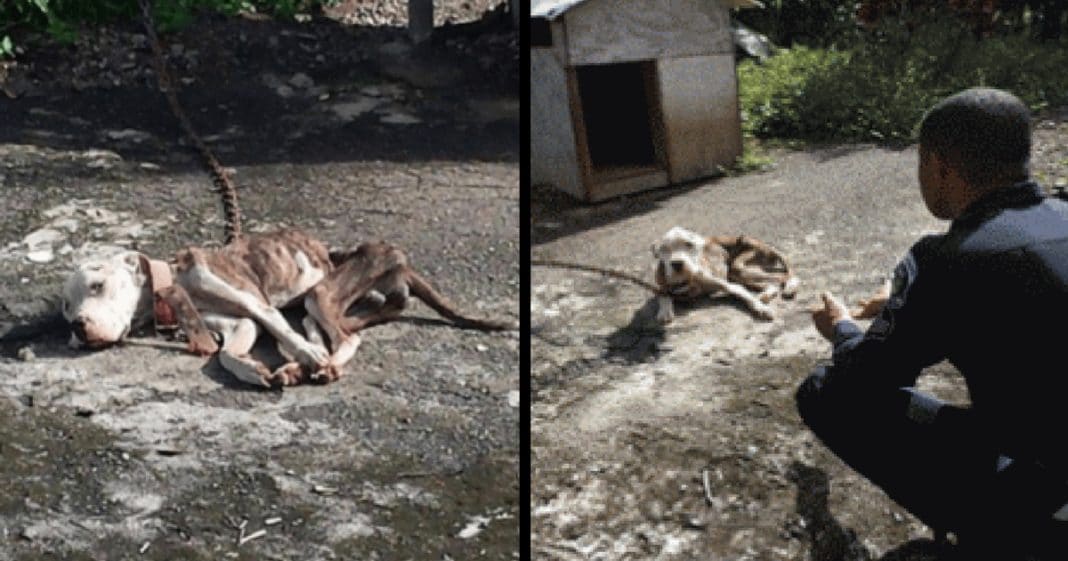 It breaks our hearts to see anyone or anything abused or mistreated. No one should ever be treated with anything but love and kindness, and when a person treats a helpless and innocent creature – human or animal – cruelly and heartlessly, it’s enough to make our blood boil.

That’s what happened when we saw these images of Rocco, a sweet dog in Puerto Rico that had been neglected and abused. Rocco’s owners would leave the poor dog chained up outside for days on end with no food or water and no ability to get anything of sustenance. After months of abuse and neglect, he was barely hanging onto life.

When a neighbor noticed Rocco’s pitiful state, he knew he had to do something to save him, so he called the police. When the authorities came to the house and saw Rocco’s deplorable condition, they acted immediately. They put the emaciated dog into their police cruiser and took him to receive the medical attention he so desperately needed.

Thankfully, Rocco responded well to fluids and he tested negative for both mange and heartworm. Miraculously, besides being extremely malnourished, he was relatively healthy.

“[The dog] is responding well to treatment,” said Iris Quiñones, president of animal rescue group OICA (Oficiales Investigadores de Crueldad de Animales). “He was given fluids, doesn’t have mange and is heartworm negative. He is a fighter.”

All Rocco needs is to get the proper nutrition and care and put on some weight to get back to his normal happy and healthy self.

While Rocco’s abusers, 39-year-old María Teresa González Escudero and 29-year-old Carlos Colón Concepción, weren’t home when the police came for Rocco, they were quickly tracked down and brought to court. The couple was charged with third-degree animal abuse and sentenced for their crimes.

Colón Concepción was fined $50,000 and González was fined $25,000, but when they failed to pay the fines they were sentenced to time in prison. Finally, there is some justice for Rocco!

If a person isn’t going to take care of their pet and is going to treat them so terribly, we don’t understand why they would have one in the first place. Thankfully, Rocco will never have to go back to his horrible first home again.

Rocco is recovering well and his rescuers are hopeful that he will be strong and healthy soon. Then he’ll be ready to find a new forever home and a family who will love him and treat him the way he deserves!

Do you agree this neighbor is a hero for stepping in to help save Rocco’s life? So share this!