4 Olympians Take The Podium, But What 1 Of Them Does When Music Plays Is Going Viral 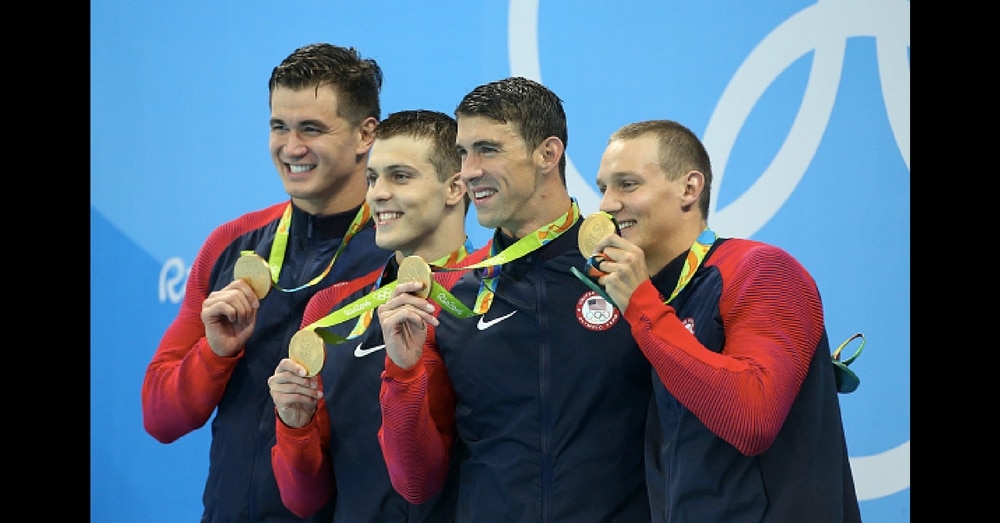 We love watching the Olympics for a lot of reasons. For one thing, it’s absolutely incredible to watch humans perform feats that seem to defy the laws of physics. We also love hearing the inspirational stories of athletes who have overcome various hardships to take the Olympic stage and realize their dreams.

On Sunday night, America was given just one more reason to love the Olympics, and a new name to cheer for.

The U.S. men’s swimming team absolutely killed it in the 4×100-meter freestyle relay on Sunday, beating France and Australia in a dramatic finish.

The win was an exciting one for all four of the men involved – swimming legend Michael Phelps, gold medalist Nathan Adrian, and Olympic newcomers Caeleb Dressel and Ryan Held.

But while this was Phelps’ 19th gold medal, it was a first for Dressel and Held, and it was Held’s reaction as he stood on the podium that captured hearts across the country and instantly went viral.

As the four swimmers stood on the podium to receive their medals and the national anthem began to play, 21-year-old Held, overcome with the emotion of the moment, broke down in tears.

“I’ve heard the national anthem thousands of times before, but there was something different about this one,” he said. “I just couldn’t hold back the tears.”

As he wept, Phelps grabbed him and held him, sharing in the special moment.

Held’s emotional display captured the hearts of people – especially women – around the world.

Even Olympic veteran Phelps was caught up in the moment, growing misty-eyed as he celebrated with his teammates.

“I told them beforehand it is OK to sing, and it is OK to cry,” he said. “It is good to see the emotion out of those guys, and it shows they really do care. They were so amped. As one of the old guys it is pretty cool to see.

We have already seen so much greatness come out of these Olympics, and it’s just getting started! We can’t wait to see what these next couple of weeks bring!

Were you touched by Ryan Held’s display of emotion at hearing the national anthem? So share this!