3 Strangers Give Mom Bad Feeling. When Woman Reaches For Her Baby, She Captures Unexpected Moment On Camera

Bringing little ones on a trip to the supermarket is no easy task for any mother, especially if you’re caring for a child with special needs. Such was the case for Suzie Skougard who seemed to be running into one problem after another on her routine grocery run. On top of handling her fussy daughter, Carly, Suzie encountered three separate strangers who just made the whole ordeal worse.

The grocery store “Grinches” collectively scolded her for not putting shoes on her daughter, dismissed her request for help in finding an item and shoved past her like she didn’t even exist. Though they were all just little things, the young mom was totally frazzled and downright exhausted from all the rudeness. She started to lose her faith in humanity. What happened to good old-fashioned kindness and respect?

That’s when she ran into one woman that turned everything around in a matter of seconds. Read her heartwarming Facebook post below that details the “amazing gift” this grocery store clerk gave her that day, in a moment when she least expected it and most needed it:

By the time I took the picture Carly had gotten upset, (it was past time for milk and nap was interrupted), but I still took this picture, because when exchanges like this happen, they are my favorite moments in the world. This woman works at our local grocery store, I always pick her checkout lane. Even back when I was pregnant — I chose hers, even when the line was longer. When I was pregnant, I’d talk to her in the few minutes I had. I wanted to knew what Down syndrome would mean for my daughter as she got older. What would her life be like? Would she be anything like this woman? 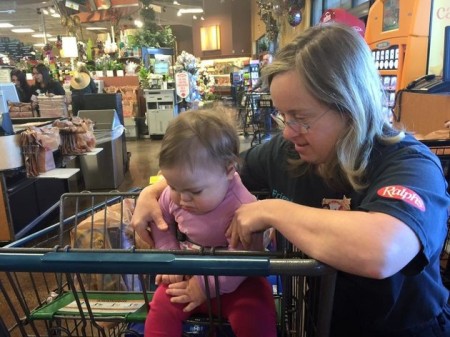 I never mentioned that Carly had Down syndrome until one day out of the blue when Carly was around six months old, she… Read more