2 Airmen Start Singing In Middle Of Smithsonian. What Happens Next Leaves Visitors In Awe 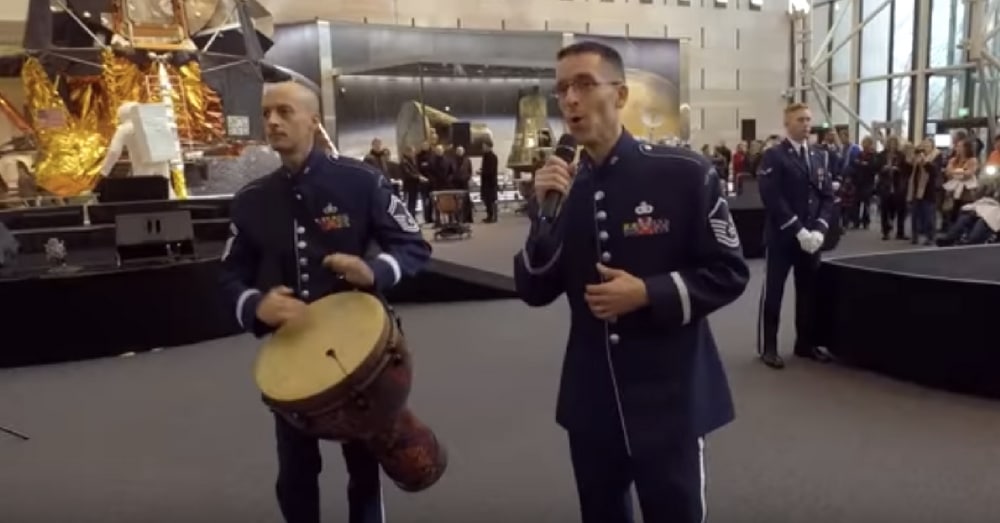 Visitors to the Smithsonian’s National Air and Space Museum were in for a wonderful surprise last week when their tours were suddenly interrupted by a holiday flash mob.

This was the fourth year in a row that the U.S. Air Force Band and Honor Guard has kicked off the holiday season with such a flash mob, and it’s the perfect way to get into the holiday spirit!

The flash mob started with Senior Master Sgt. Joe Reynolds on a jembe, a traditional West African drum, and Master Sgt. Matthew Irish singing. They were soon joined by other musicians and vocalists singing “Patapan.”

The display area quickly filled with 125 band members, including the Singing Sergeants and members of the Concert Band, as well as a hand bell choir.

After finishing “Patapan” the band transitioned into the traditional Christmas carol “Ding Dong Merrily on High.”

The looks on the visitors’ faces – including a group of veterans from the Armed Forces Retirement Home – show the joy and wonder that the performance brought. It was a magical event that is sure to get you into the Christmas spirit!

Those who have participated in the flash mob over the past few years love how the performances help members of the Air Force connect with civilians all over the world. Videos of their first three flash mobs reached over 50 million people!

Air Force Secretary Deborah Lee James, who participated last year and performed again this year in the handbell choir, said she was really excited about this year’s flash mob.

Before the surprise event she said, “I’m looking forward to helping spread holiday cheer to all the dedicated service members, past and present, who have sacrificed so much in service to this great nation.”

Did you love this holiday flash mob as much as we did? So share this!