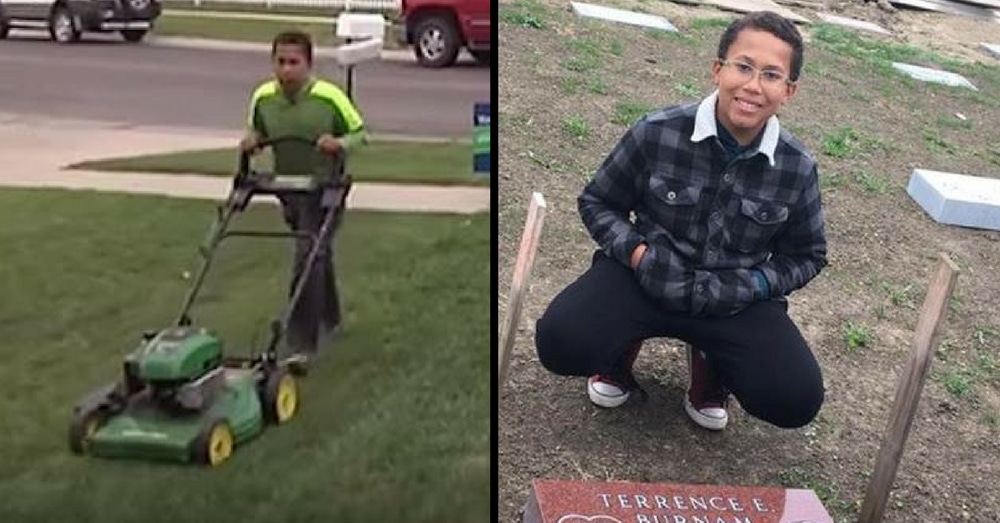 It’s only natural for kids to want to know where they came from, so when 11-year-old Brandon Bakke started asking his adoptive mom, Brandy Bakke, about his biological dad, she helped him do some digging.

She found Brandon’s biological sister, Tiffany, on Facebook, but she only had heartbreaking news for them – his father, Terrence, had died the year before at the age of 56 from an asthma attack.

Brandy asked Tiffany if she would take Brandon to visit their father’s grave and she agreed, but warned Brandy that there was nothing marking the grave because the family had been unable to afford a headstone.

As soon as Brandon heard that, he knew he had to do something.

“When I found out my dad’s grave didn’t have a stone, I got really sad and thought if I did something for him, he’d be proud,” he said.

Brandon had been mowing lawns around his North Dakota home that summer and had earned $175. He told his mom that he wanted to use the money to buy a headstone, but when she told him he would need a lot more than that, he said he was going to work harder to earn more.

“My husband and I were very proud of him and were going to support him in any way we could to help make it happen,” Brandy said.

He called a gravestone company to ask about pricing, but when they heard his story they told him they would provide him with a headstone at no cost and would even let Brandon design the stone himself.

Since he didn’t know his father, Brandon asked Tiffany to tell him about their dad so he could get a better idea of what should go on the stone.

“She said he was always helping people and loved to cook,” he said. “After she said that, I knew exactly what I wanted to put on there.”

He ended up designing a headstone that featured a heart and two hands holding a bowl of soup, signifying his dad’s work to feed the homeless.

‘Nobody goes unknown in life’: Boy mows lawns to buy gravestone for dad he never met https://t.co/jcyD6VZjJr via @todayshow

On October 20, Brandon gathered at his dad’s grave in Chicago with more than a dozen of his biological family members who had come from all over the country for the special day.

“It was a very emotional day for Brandon,” Brandy said. “As much as he loved meeting his biological family, who are all kind, wonderful and supportive, it saddened him to know he’ll never meet his dad.”

But Brandon left feeling inspired. He decided to start a business to help others who find themselves in the same situation his family did.

His lawn mowing and snow removal business is called “Mowing and Blowing for a Purpose,” and most of what he earns goes toward a memorial-stone fund to help families honor their loved ones when they can’t afford to on their own.

His mission is to “make sure nobody goes unknown in life.”

“I always wanted to meet my dad and wish I could’ve before he died,” Brandon said. “I know he would’ve loved to meet me and would be proud to call me his son.”

We can’t help but agree!

Are you impressed with what Brandon has done to honor his father and others like him? So share this!