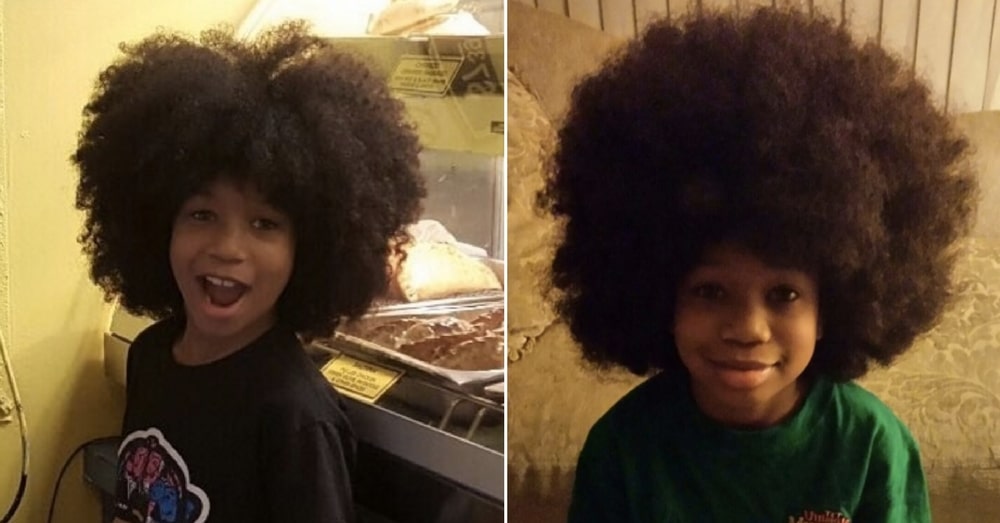 Thomas Moore was only 7 years old when he saw his mom, Angie Pulos, watching a video about a girl who was battling cancer and had lost all of her hair. Curious, he had Angie explain what cancer was and why chemotherapy can cause a person’s hair to fall out.

Right then and there the sweet young boy knew he wanted to do something to help the little girl in the video. He decided to grow out his hair and give it to her.

Thomas didn’t set a time frame for growing his hair out – he said he “just wanted it to be long enough to make the girl feel happy.”

As his hair grew longer it got harder to manage. They had to put it in cornrows to keep it tame, but Thomas’ sensitive head made the braiding process painful and uncomfortable. He came close to calling it quits several times, but each time he would get discouraged he would “re-focus on the reason for growing it.”

On Saturday, Thomas finally went with his mom and siblings to get his hair cut. His aunt, Amber Ray, said he was a little nervous about getting it cut, but once it was done “he said he felt good about it and hoped it would make other people happy.”

my nephew grew his hair out for two years to donate to kids with cancer ? pic.twitter.com/YuamNNcMEI

Since Amber posted the pictures her tweet has been shared more than 56,000 times, and thousands of people have shared how touched they were by this young boy’s selflessness and kindness.

@storkpatrol that’s the kind of spirit in children we need to see in more adults.

@storkpatrol what a generous and thoughtful child! Big up to the parents and those around him. ❤️??

@storkpatrol look at him! All young and being a better man than some older ones already! What a thoughtful little gentleman ???

@storkpatrol @curlycomedy kids like this give me hope for our future ❤️

The amount of hair Thomas donated is enough to make three wigs! We know the recipients of those wigs will be incredibly grateful to this sweet and selfless young man.

It’s kids like Thomas who give us hope for the future!

Were you touched by what Thomas did? So share this!