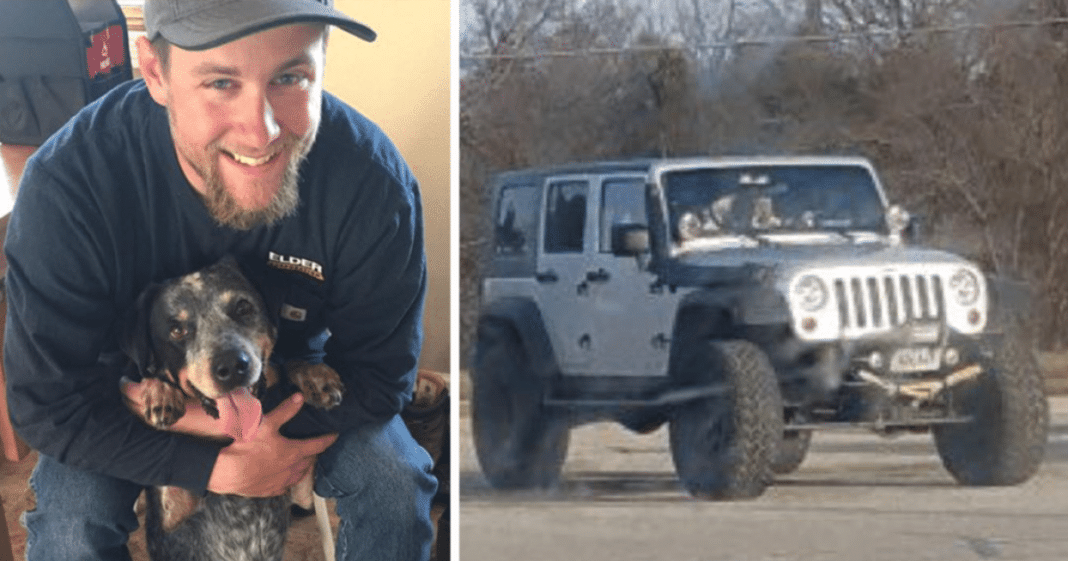 Jake Holloway, a man from Altoona, Iowa has an interest in cars. Maybe that’s why he took notice of a silver Jeep that seemed to be permanently parked in the local Walmart parking lot. As shoppers came and went amid the busy holiday season, the driver of the Jeep stayed off to himself.

After seeing the Jeep in the parking lots of major retailers over a period of several weeks, Holloway’s curiosity became stronger. Then he spotted an “I served” sticker on the vehicle and realized the driver was a veteran who had served in Iraq. Holloway has great respect for veterans and finally worked up the nerve to approach the car to find out if everything was alright. He was stunned at what he found out. 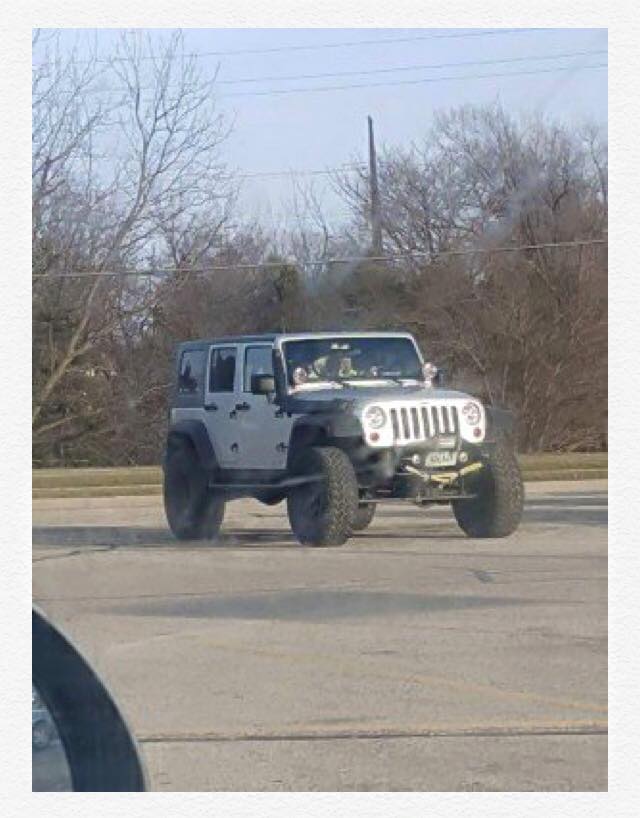 A Silver Jeep Wrangler sits isolated in the parking lot

Inside the Jeep, a man named Nick was trying to survive with no money. All he had was his loyal dog. Nick explained that he had recently taken a job with the Department of Transportation, but he hadn’t received his paycheck yet.

The story became tragic when Nick explained that his wife had left him when he returned from serving overseas. With no money and nowhere to go, he was doing the best he could, living out of the car.

In order to get by, he sold his few remaining belongings from the car.

“He’s got no money and broke as a joke.” Told me he just got a job at the DOT but hasn’t been paid yet. Said he had started selling things off the jeep(badass jeep) to have any money at all…” wrote Holloway.

“I see a lot of people out there posting about wanting to help people for the holidays. Here’s my request. I don’t know this guy from Adam and I don’t know his whole story,” Holloway explained.

He knew that the man needed and deserved help from the community, so he asked them to chip in if they could. It was heartbreaking to know a local veteran was struggling so much.

“An I’ll say this as a grown ass man it broke my heart. So if you wanna do something for someone out of pure selflessness, please… If you see him. Out of the kindness of your heart. Do something nice for him or his best friend(the boxer dog). Few bucks. A gift. Some dog food…That’s my request. Makes me sick to see a soldier on the street.” 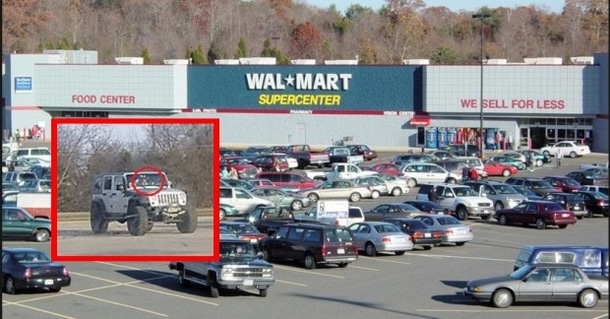 The Walmart where Jake Holloway spotted the Jeep via LoveThisPic

The post went viral on Facebook and has now reached over 6.4K shares. Dozens of people from the area stepped up to help. A GoFundMe was created. Soon Nick had a motel room provided for a full week as well as anything else he could want until his paycheck started kicking in. 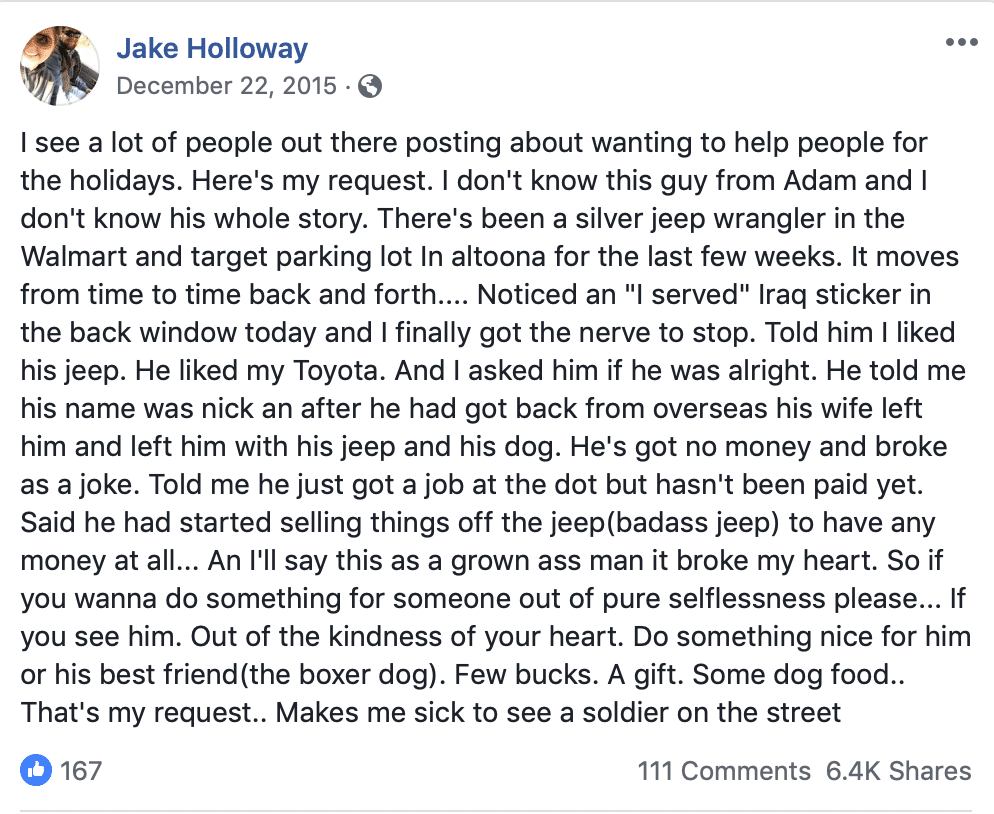 “You did a great thing Jake. I just stopped to give him money and cars are lined up. He’s truly grateful.”

“I made a stop out there and gave him some dog products and a gift card to PetSmart! God bless you, Jake!”

Others who stopped to help Nick found out he had served 17 years with four tours of duty overseas.

“He did 4 tours and is an amazing person his boxer Penny wouldn’t stop kissing me lol and yes I cried with him because he deserves so much more for serving our country.”

The community was so concerned that they coordinated with the man who provided the motel in order to visit Nick and bring him additional gifts.

The effort inspired people to get involved and help out a homeless veteran. It also reminded them that people with caring hearts were living all around them.

“Jake, this brought tears to my eyes! The things you did for this man are amazing and it’s good to see that so many people still have such good hearts.”

Not only did Holloway’s compassion help Nick and his dog Penny, but the efforts inspired many people in the town and online. The veteran realized he was appreciated and respected for his service to the country, and he and Penny the boxer got a warm bed to sleep in that night.

A special thank you to Jake Holloway for showing kindness and compassion to a veteran in need. 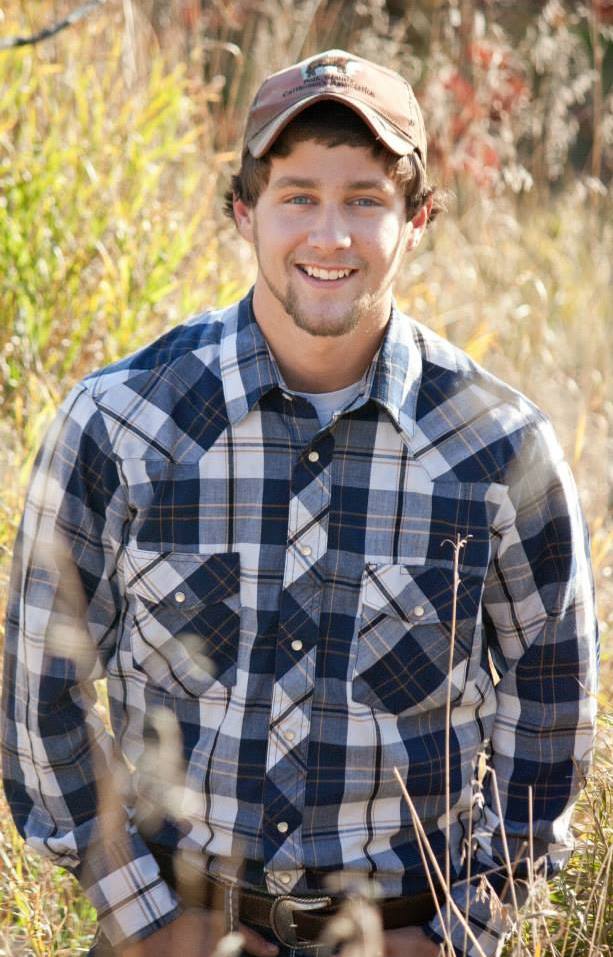