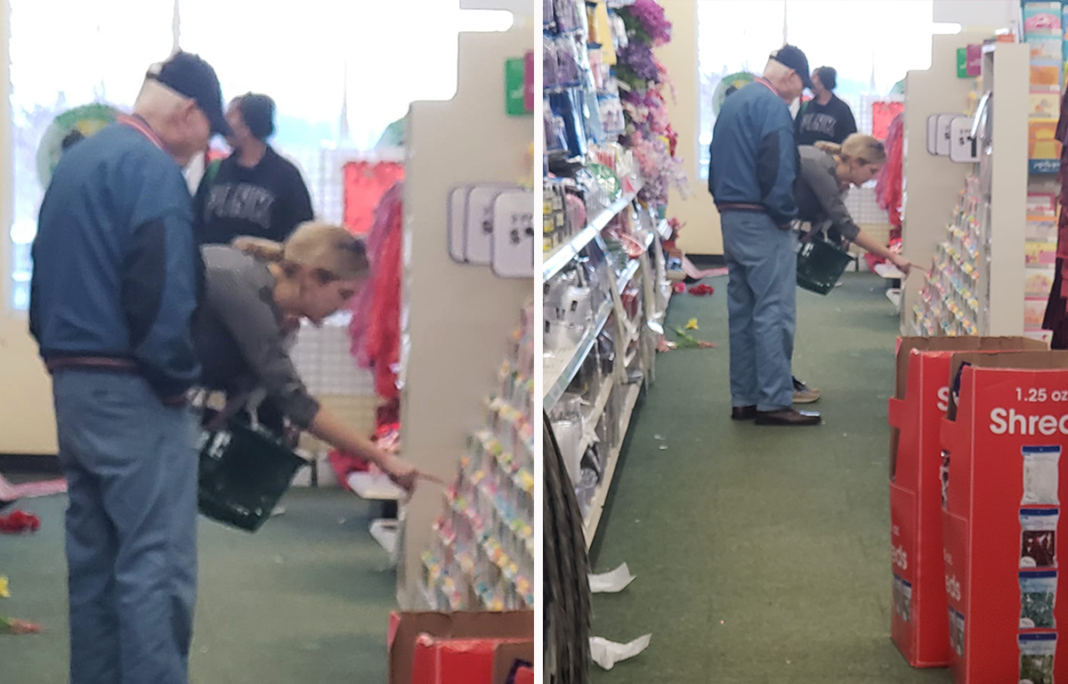 A woman from Brandon, Mississippi was out shopping at her local Dollar Tree when she overheard a conversation down the greeting cards aisle. What she heard next melted her heart and made her feel privileged to have witnessed a pure love story.

Louisa Lenore McKinney was so touched by what she heard, she took a photo and shared it on Facebook, where it went viral and touched thousands of people.

Standing in the aisle, an 85-year-old veteran asked a stranger for help.
He reached out to the woman with a very special request. He wanted a birthday card. However, as she would find out, this was no ordinary circumstance.

“This older gentleman very softly said to the lady in the photo:”

“Ma’am, would you mind helping me out with something?”

“I need help picking out a birthday card.”

Spare greeting cards needed; grab 'em from the Dollar Tree
or homemade works, too! Thank you!!!

Then the story takes an unexpected turn…

“This is where I started to sniffle.”

Why would someone buy a card for their own birthday? He explains, and it leaves McKinney overcome with emotion.

“My wife wanted to get me something, but she’s very sick and cannot leave the house, and I want her to know I got a birthday card from her.”

McKinney says that the elderly man went on to reveal that he married his wife as a teenager. They had a family but he had to leave when he went into the military. The whole time, she stayed by her man faithfully.

Now, he wanted to find the perfect birthday card, picked out with the love, care and attention that she wanted so badly to do herself. That way when he returned home to his ailing wife, she wouldn’t feel guilty anymore about not being able to show him the same thoughtful consideration she had always shown throughout their lives. Even though she was sick, she continued to put him first.

McKinney was so moved to hear such a beautiful love story that she had to share it.

“It was the picture of love you only read about.”

“I felt so privileged to get to hear this conversation. Melted my heart.”

As a special sidenote, we find out that the kind woman who helped the veteran find a card for his wife offered him something more.

“P.S. This sweet lady was so willing to help, and listened to his every word with such kind ears, she told him that her husband and she owned a restaurant, and would love to treat this gentleman and his wife to dinner whenever they were able. ❤❤❤”

UPDATE! Hi everyone! The lady in the photo has been in contact with this gentleman and his wife, and we have learned so…

Of the almost two-thousand comments, someone recognized the kind woman in the photograph.

“Oh my gosh!! I know this sweet lady!! That’s Lisa and her and her husband are as good as they come!!! How wonderful!!”

Lisa came forward to confirm that it was her. When a friend told her “You rock! We need more kindness in the world,” she responded:

“Thank you sweet girl ☺️ I feel like I’m the blessed one though…it was such a joy listening to his story.”

Most other comments are from people who say how much the story touched them, even to the point of happy tears. It reminds us that true love and kind, good-hearted souls continue to exist all around us.

“There are still people who are compassionate and willing to assist others. Are you one of those people?”

“The world surely needs more of such people. Think about it!!!”