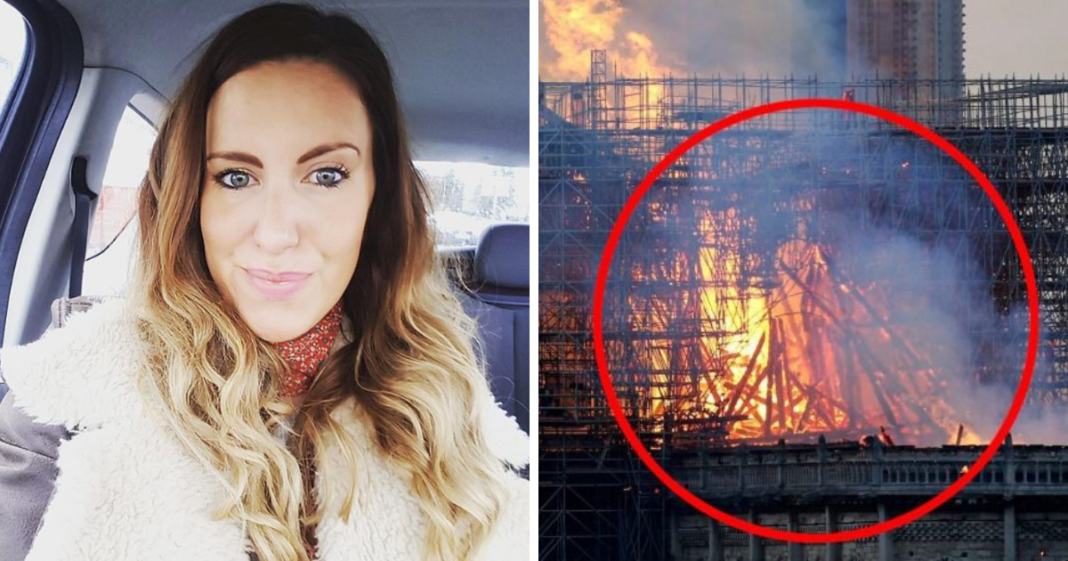 The world was in shock and grieving on Monday as the 850-year-old Notre-Dame Cathedral in Paris, France was seen burning after 7 p.m. local time. Images of the great spire toppling over, engulfed in flames were traumatizing, regardless of your place of origin or religious beliefs.

One woman who worshipped at the cathedral for 44 years said:

“She was so beautiful, and now the sky is sad,” she said.

“This is such a shock to me,” said Cecile Deleville.

One mom from Alexandria in West Dunbartonshire, Scotland, Lesley Rowan, 38, was looking at the horrifying photos when she noticed something that jumped out at her. There in the midst of the burning scaffolding, she saw the figure of Jesus standing there.

She shared the picture to social media with the caption:

“I may be letting my mind play tricks on me here, folks take a close look at this pic and tell me what do u see. I’ve even circled it!” 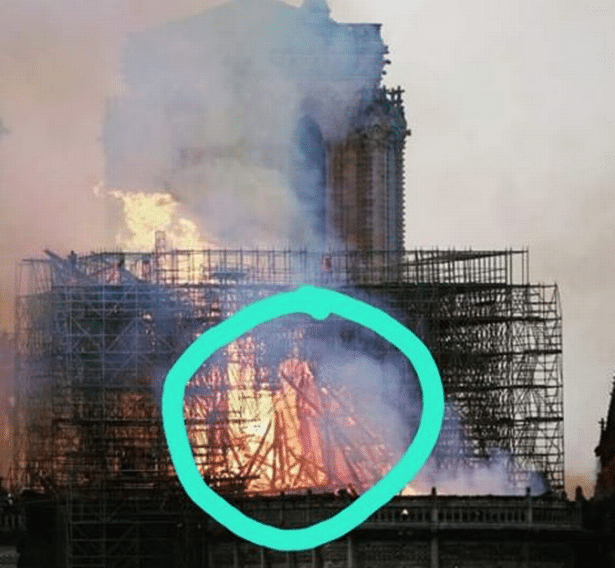 The Daily Record shared her comments from the post:

“When I looked at this photo last night, I was really astounded by what I saw.”

“When I look at it I see a silhouette of Jesus. I really see a vivid image.”

She wanted to know if others could see what she saw, and they did.

“I shared it and asked for people’s opinions – even my brother in Australia said it looks like Jesus.” 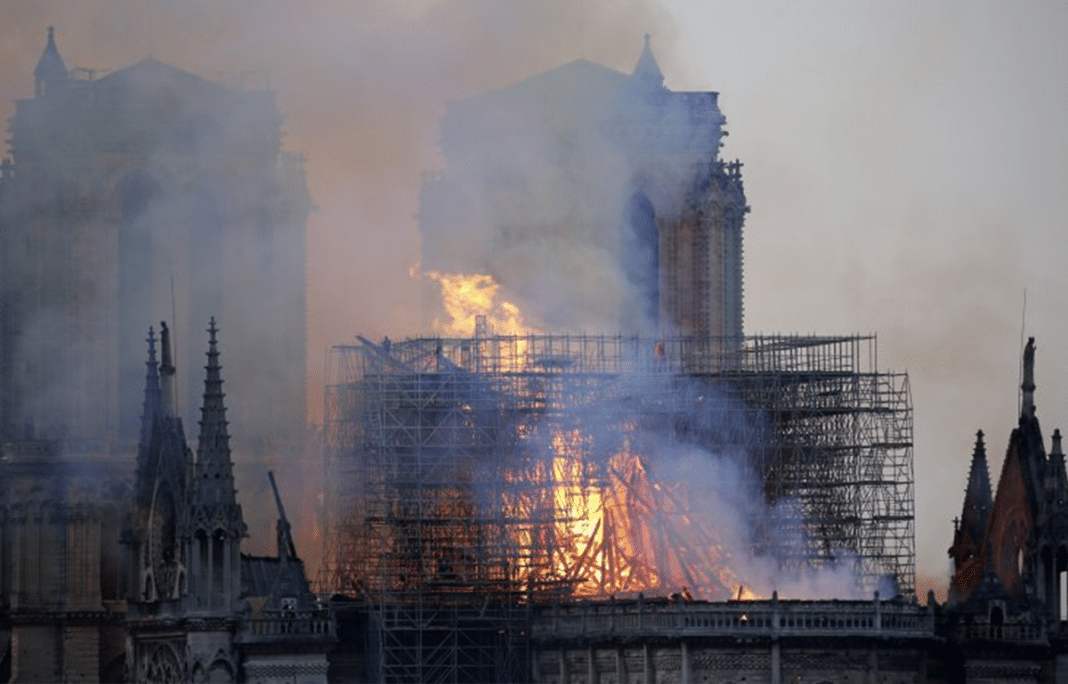 Now she hopes the story might help bring comfort to people everywhere who were saddened to see the iconic cathedral in ruins.

“I feel like it will bring comfort to people in Paris and all over the world at this sad time.”

Immediately, her friends agreed that there was a figure standing there.

“Yeah I saw it straight away – it’s Jesus!” wrote one person.

“Looks like a figure of Jesus, or I am tripping?” posted another.

“I can see it pretty clear, gown and all.” said a third friend. “Imagine this was how God showed us he wasn’t happy with us, by using acts of god to take away ancient, beautiful monuments/ and cathedrals.”

After news about Lesley Rowan’s photo went viral, she shared an update, expressing her feelings after taking some “flack” about the post.

“So today what I saw has gone “Viral” Even made the Daily Mail in Australia! Amazed, to say the least. Fair to say I have taken a fair amount of flack for it especially the Lad bible.“

“But I am glad I shared what I saw. Everyone sees things differently. Everyone views images differently and that’s ok it’s called being an individual, thanks for all the lovely messages as the good will always outway the bad! Peace & Love!” 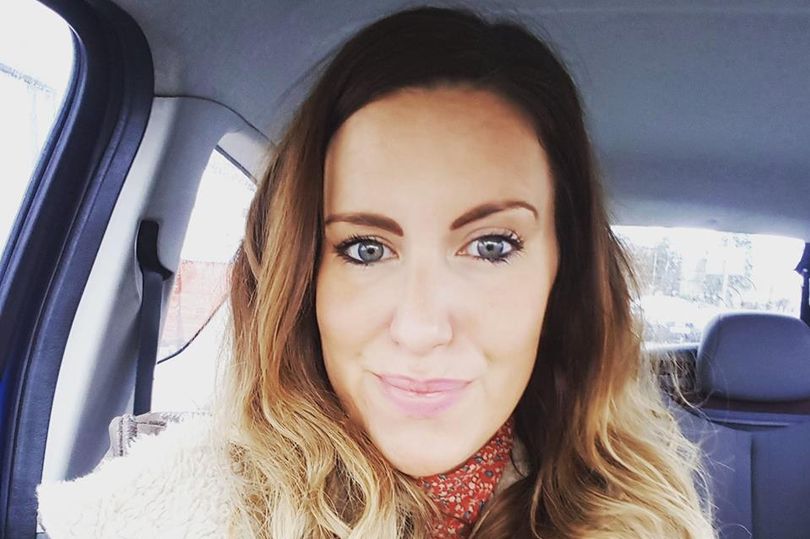 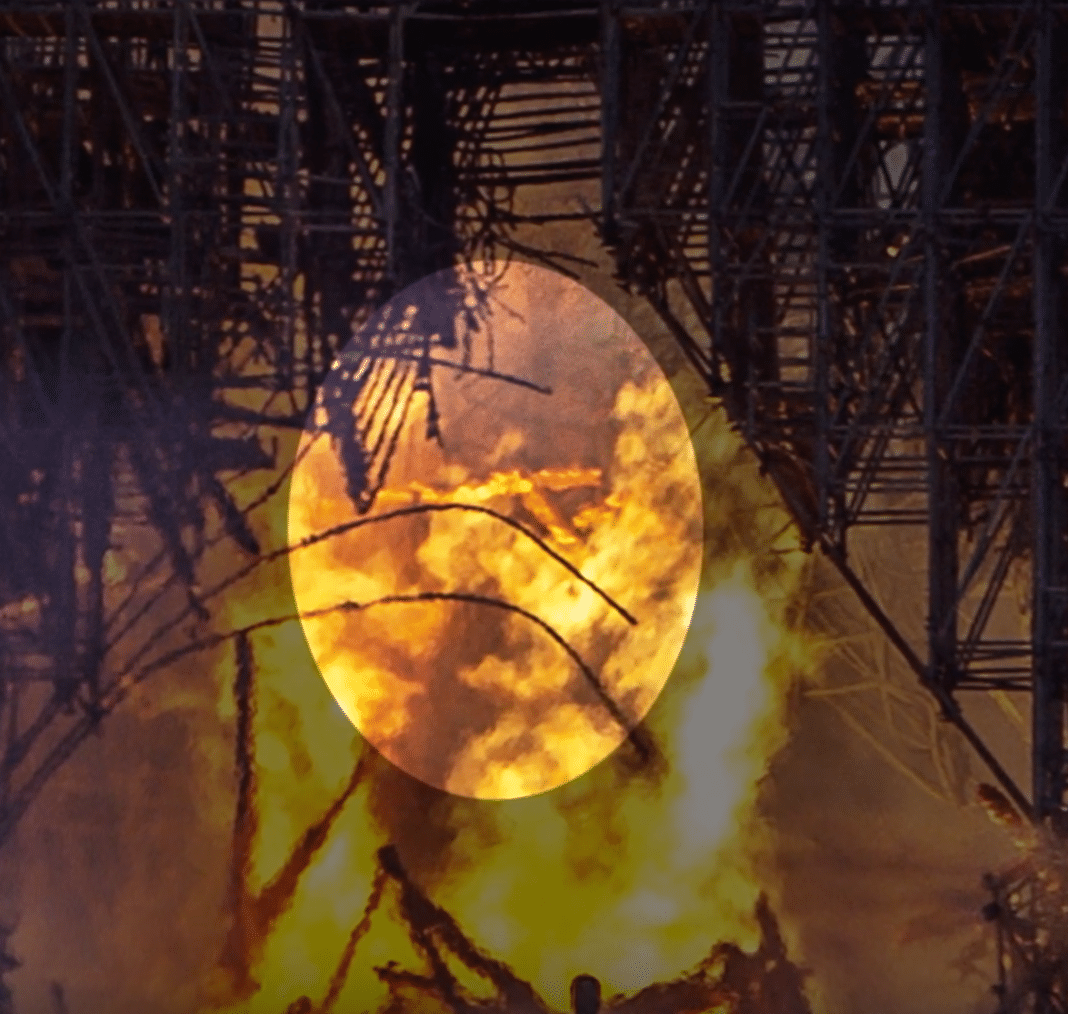 Some people see an angel in this image

Although it was tragic and highly emotional for people of all walks of life to see this beautiful historic building burning, fortunately, much of the art and religious relics were saved from the blaze. Even some of the priceless stained glass windows appear to have survived the blaze.

A team of 50 investigators will look into what caused the fire at the 12th-century structure. Early reports suggest the “flames may have started at the bottom of the cathedral’s giant spire and may have been caused by an electrical problem in an elevator.” An hour after the fire started, the spire was overtaken by flames.

Already, a billion dollars have been pledged to help restore the landmark, including pledges of more than $600 million by French billionaires and philanthropists. President Emmanuel Macron has pledged the ambitious goal of rebuilding Notre Dame within five years.

See more from Veuer below: