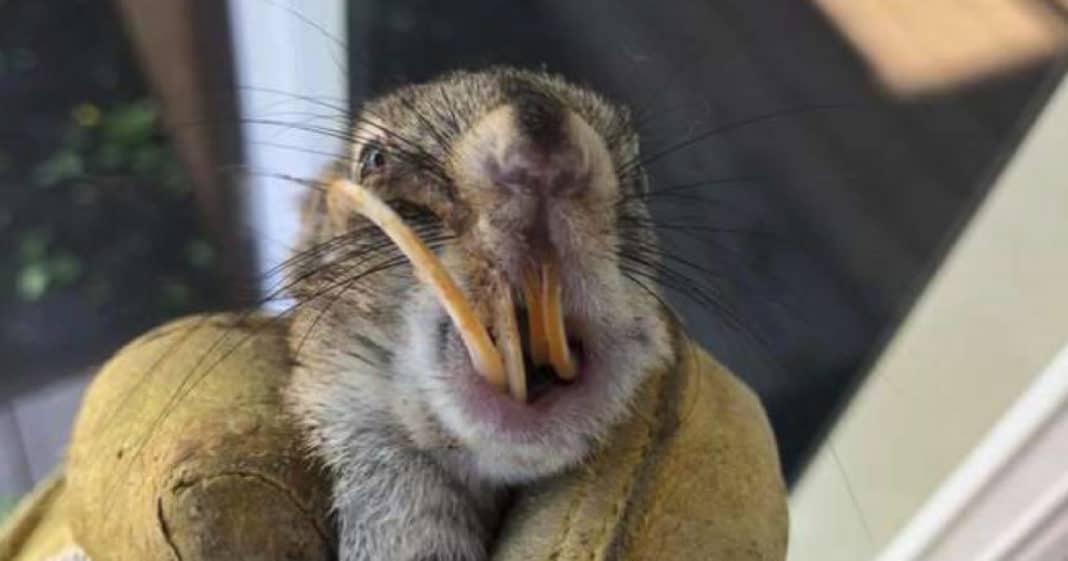 We’re not supposed to intervene in the lives of wild animals. They live in nature and so we must let their lives take its course. What if they’re in pain or are suffering? What if, with minor intervention, we could improve their lives? When confronted, it’s a difficult decision to make.

Janet Talbott lives on a rural property in Alberta, Canada. One morning while on her deck, she spotted a squirrel who appeared to be in pain. It had a messed up tooth. Something about the squirrel touched Janet’s heart, and she decided to step in and help the creature she eventually named Bucky.

While on her deck, Janet spied the little squirrel eating. She noticed something peculiar on the side of his face. On closer examination, she observed a long curly tooth protruding from Bucky’s mouth. It was so long; it was infringing on the sick animal’s eyeball.

Posted by Animal Lives Matter, the Original on Thursday, June 21, 2018

Squirrels, like all rodents, have teeth that don’t stop growing. These animals constantly gnaw, which keeps their chompers at the right size. But something happened with Bucky; worrying about how to catch the wild guy kept Janet up at night.

The right time finally came for her to snatch him. Bucky was hanging out in her bird feeder. On closer inspection, Janet realized Bucky had a mouth full of overgrown teeth.

“His mouth was an absolute mess. His upper incisors were curled around and growing inside his mouth,” she said. “When he ate, his teeth were rubbing on his face. He was so horrific.”

Janet briefly considered taking Bucky to a vet. She opted against that because they might refuse to treat a wild animal. She did some detective work of her own. She learned that squirrels don’t have feeling in their teeth as people do. She could trim Bucky’s teeth on her own without causing him pain.

“I went upstairs and got my cuticle trimmers,” Talbott said. “I wanted to have him nice and calm, so I let him relax for a bit.

“Then I got my trimmers, swaddled him and went to work. It took under 10 minutes.  He was totally relaxed the whole time. It was kind of serious dentistry, but he was such a good  patient.”

Posted by Animal Lives Matter, the Original on Thursday, June 21, 2018

This story gets even better. After she released him, Bucky ran to a tree branch where he started to explore his new face. And the following day, Janet glimpsed him on her property looking as healthy and happy as can be. It’s uncertain whether her intervention will be long-lasting, but Janet’s just glad she did what she could for bucky. She hopes her story will inspire others to show compassion for animals.

I’m all for helping animals. I don’t know if I’m brave enough to touch a wild animal.