Woman Hears Tiny Cries From Beneath Dark Crevice, Spends Hours Trying To Save A Life 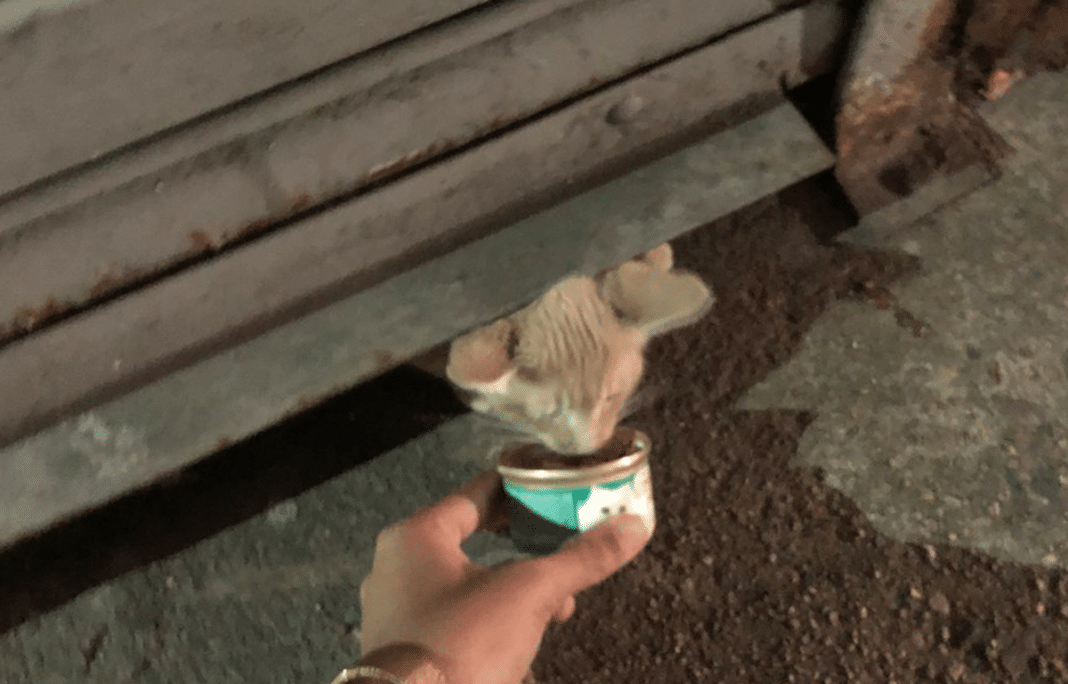 You never know where your next best friend might come from, but who would guess under a crevice on a busy city street?

Elysia Caris was on the way home in bustling New York City. Aside from all the people, it wasn’t uncommon to see a cat here and there scurrying along to who knows where. Most people pay little mind to the stray cats around them, but Caris was different. She loves animals and notices them around her in the concrete jungle. One little kitten was lucky when Caris overheard his faint meows as she walked down the street. Instead of ignoring it, she investigated further.

There, in crawl space underneath a rusty metal door, a cat was meowing. As she approached, she saw a little paw sticking out of the crevice. She got down on her knees to peek into the dark and saw an orange tabby. He was cold and dirty and looked very lonely, all by himself in the dark. Then she found out from neighbors that the stray cat had been existing in the crawl space for weeks.

Caris wanted to help but knew from previous experience that stray cats can be fearful and even bite if they don’t know you. She would work to gain the kitten’s trust with some yummy food first.

Caris purchased some cat food and tried to lure the kitten from out of the dark. He was so shy and skittish, that every time she got close he would dart back out of reach. Cold and frustrated, she left the can of food beneath the door where he could get to it and continued on her way home.

That night, she kept thinking about the cat. She told the Dodo:

“I felt like he was already my cat,” Caris said. “I just couldn’t leave him there. It makes me sad envisioning him in that cold space for as long as he had been.”

The next morning, she returned to the scene and was happy to see the cat, which she would later name Ying. This time, she doubled her efforts. She put the cat food in her hands and waited patiently. Eventually, the hungry cat couldn’t resist and started eating from her hands.

“I, again, got a can of food and this time put some on my hands to get him out of the gap,” Caris said. “He got closer and closer and proceeded to eat from my hands. When he finally wriggled all the way out, I scooped him up and took him home.”

The nervous cat meowed and protested until Caris had some time to bond with him in the safety of her home. Once he had some time to explore and sit with Caris, he calmed down, realized he was safe and finally in a warm and comfortable environment. Caris and Ying bonded so much that she thought that maybe the cat had chosen her instead of the other way around.

Ying was already enjoying his new home, cuddling in some warm blankets and playing with toys his new mom had for him.

Although she didn’t have any pets before Ying, now she was a very attentive parent. She went out to buy him a cat tower and his own set of name tags.

“He deserves the best,” said Caris.

After weeks of hiding and trying to survive in the city, Ying and Caris are inseparable. They are both lucky to have found each other in a most unexpected way.