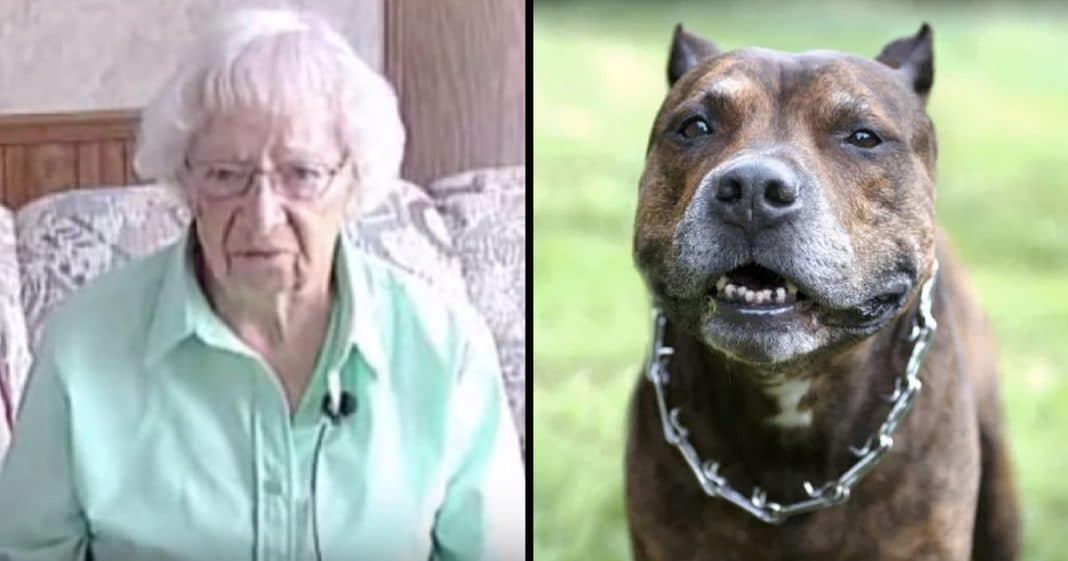 We don’t like stories where someone is harmed by animals. We wish all dogs were gentle and cuddly, but the truth is some aren’t nice.

At 97-years-old, Sophie Thomas has lived a good, long life. While picking dandelions one day in her Michigan garden, though, Sophie experienced a horrific, unexpected attack.

Four pit bulls had escaped through a window in Sophie’s neighbor’s home and found their way to Sophie’s place. A group of vicious dogs against one woman certainly isn’t a fair fight. Sophie was terrified, but all of a sudden an unlikely hero came to her rescue.

Sophie recounted her frightening ordeal: “All of a sudden these four pit bulls came marching in, and they surrounded me. They kept going around and around. One of them lunged for me, and I hit him on the head, and he backed off. Then another came towards me, and I was scared stiff. I gave him a whack. All of a sudden, my cat jumped in the middle of it.”

Because of Tiger’s interception, Sophie managed to dash inside her home where she was safe. As she cleaned her wounds, she thought for sure Tiger would be killed.

Instead, to her surprise and obvious delight, when Sophie glanced out her door, she noticed Tiger waiting to be let inside.

“I do not know what would have happened if my cat hadn’t jumped in,” Sophie said. “She’s very close to me and follows me around. She’s very friendly with me because I live alone.”

“I always thank God that my cat came because she was the one that helped me out,” she added

The pit bulls belong to Ann Daniels, Sophie’s neighbor who lives behind her. According to Daniels, her son left the window open, and that’s how the dogs escaped.

Daniels insists her dogs aren’t violent. Nevertheless, she was fined $300 and the dogs were quarantined for ten days.

Even though Sophie’s neighbor says her dogs aren’t aggressive, she apparently doesn’t know her animals that well. This was a tragic accident that could’ve been prevented. The son leaving the window open isn’t to blame. Responsibility rests with the owner who hasn’t trained their dogs.

The outcome could have been so much worse. Thank God for Tiger and her heroic actions that saved Sophie that day!

Were you amazed by the way Tiger fought off four pit bulls to save Sophie? So share this!