Veteran Sentenced To Jail After Failing Sobriety Test, But Then He Sees Judge In His Cell… 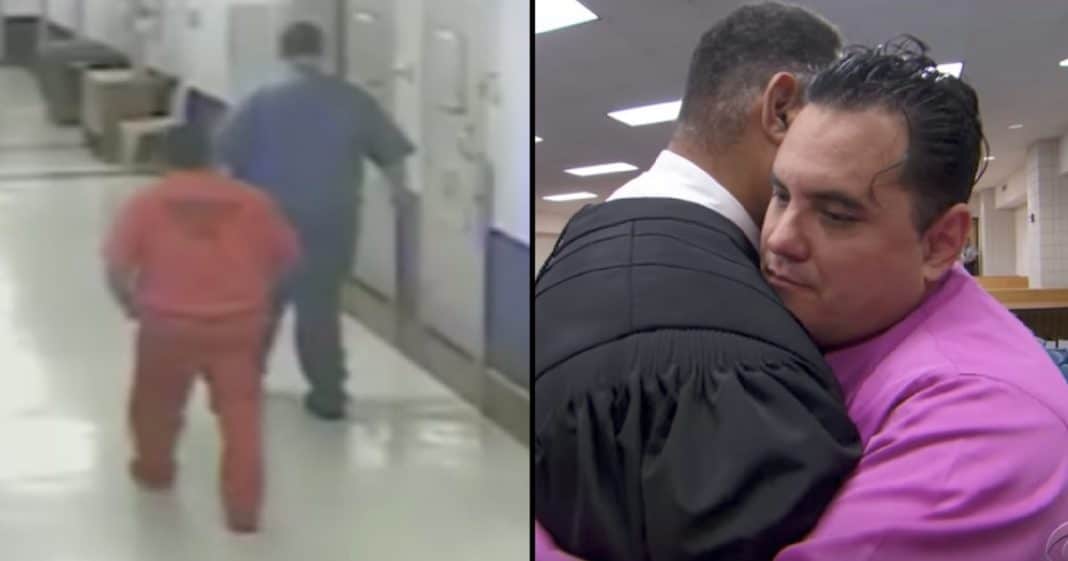 Those serving in the military see atrocities many of us can’t imagine. It’s no wonder some return home fighting their own inner battles.

Post Traumatic Stress Disorder (PTSD) is common among veterans, but anyone who has experienced a traumatic event like a terrorist attack, natural disaster, battle, personal assault or abuse, or the death of a loved one can have PTSD.

Symptoms of PTSD can include: “flashbacks and nightmares; emotional numbness and avoidance; difficulty sleeping and concentrating, feeling jumpy, and being easily irritated. Most people recover from  their experiences, but people who have PTSD continue to be severely depressed and anxious for  months—or even years—following the event.”

Within two decades of serving in the military, Sgt. Joseph Serna, a former Special Forces soldier, did four combat tours in Afghanistan. He nearly died three times – he survived a roadside bomb, a suicide bomber, and an IED explosion.

Serna recalled that trying day back in 2008 on a narrow dirt road in Kandahar. The armored vehicle Serna and three other soldiers traveled in toppled into a canal:

“I felt a hand come down and unfasten my seat belt and release my body armor,” he said. “Sgt. Treber picked me up and moved me to a small pocket of air. He knew there was not enough room for both of us to breathe so he went under water to find another pocket of air.”

Serna was the only survivor.

While in combat, the decorated Green Beret earned three Purple Hearts and many other accolades. But it all came with a cost – Serna hasn’t been able to leave the war behind.

The former soldier has PTSD and, after self-medicating with alcohol, he was charged with driving under the influence. As a result, he entered the Veterans Treatment Court, a program in Cumberland County, North Carolina.

State District Court Judge Lou Olivera heads the program. Olivera is also a veteran – he served in the Gulf War – so he fully understands what veterans like Serna are going through.

Since he’s been home, Serna has struggled to remain sober. He has appeared before Judge Olivera 25 times to have his progress reviewed. After failing a urine test and lying about it, Serna was sentenced to one day behind bars.

Despite the jail being in a neighboring county, Judge Olivera drove Serna to the slammer himself. The former military man described Serna’s state – exacerbated by his PTSD -before entering jail: “When Joe first came to turn himself in, he was trembling,” the judge said.

Olivera knew he couldn’t leave Serna alone in that cell. Unbeknownst to Serna, the compassionate judge decided to spend the night in jail with him.

After Serna was taken to his cell, he took a seat on the cot and prepared for a long night. That’s when he heard the cell door rattle open. Glancing up, he noticed Judge Olivera standing before him.

As the cell door locked closed, Olivera took a seat beside him. Serna couldn’t believe his eyes.

“This was a one-man cell so we sat on the bunk and I said, ‘You are here for the entire time with me?'” Serna recalled. “He said, ‘Yeah that’s what I am doing.’”

The judge didn’t want to leave Serna alone for the entire night because he was afraid it would trigger his PTSD. The two sat and chatted about their experiences in the military.

“It was more of a father-son conversation,” Serna said. “It was personal.”

Judge Olivera said about veterans like Serna: “They have worn the uniform and we know they can be contributing members of society. We just want to get them back there.”

Isn’t Judge Olivera fabulous? Most in his position wouldn’t sentence someone to jail and then willingly serve the sentence with them.

Olivera’s compassion and empathy changed Serna’s life. He vowed to the judge he’d never see him again in his courtroom. We think Serna will finally turn his life around and break away from the horrible experiences of his past.

Were you touched by this judge’s compassion? So share this!