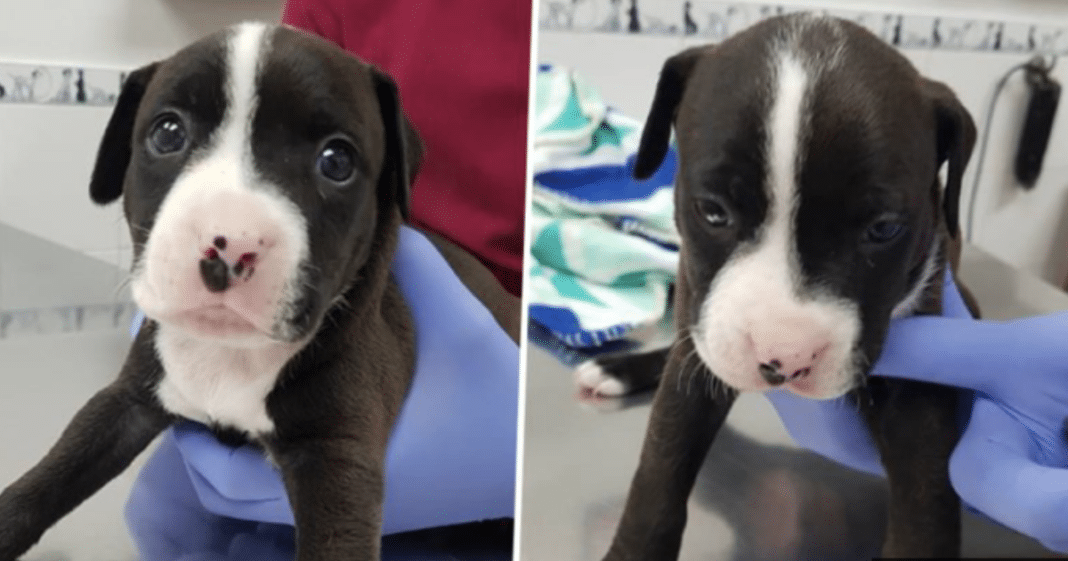 Sadly these days, there’s a lot wrong in the world, and one stellar example of that is a tiny puppy abandoned on Boxing Day.

In a cruel and twisted turn of events, a heartless person decided to get rid of their adorable dog on the most unlikely of days. But in this day and age when it seems like everything ends up being exposed on social media, this person’s sick actions are not going unnoticed.

“December the 26th AKA Wednesday started like every other day, usual chaos, usual 100 phone calls and messages, and then the dreaded I found a puppy message came. A small cute puppy had been found in the bin, not unusual here, but always more upsetting knowing he was an unwanted gift!” PetPals said in a post.

‘I collected the pup, and off we went to the vets, Barry Basura as he had been christened, is just four weeks old, small, innocent, and doesn’t understand what the hell is going on. Usual vets checks done, entry photo taken, popped up on FB sating the usual not up for adoption, more of a yippee the first of many posts.

‘OMFG…. fast forward 48 hours…… over 633,000 people have seen the post, over 3.5K of shares, and 2500 comments… not all constructive, in fact very few constructive comments. Don’t get me wrong the sharing the page is fantastic, the PM’s from people wanting to adopt other dogs is fantastic, BUT the trolls, god give me strength.’

I was criticised for publishing the puppy as he was not up for adoption, I was slated for calling the puppy Basura which according to one mortified lady “means bin in Spanish” yes dear I know, that was sort of the point. this went on and on, like a dripping tap all day… moan, bitch, whinge.

Thankfully there were some great comments, some intelligent PM’s and some genuine interest in what I do. Sadly out of the 633,000 people that clicked on the post, 27 donated towards my vets bill, yep its creeping up again. But hey cannot have it all. So thanks Barry Basura for causing a stir, and getting people on the page, but come on guys calm down it is only a puppy!

“Barry was thrown in the bin most likely due to being an unwanted gift. Puppies in bins happens a lot here sadly. Many are killed and not found in time. He is approximately 4 weeks old and was infested with fleas malnourished and anaemic. He is doing well now though.”

We hope Barry finds a nice home, and we hope this serves as a reminder to everyone – puppies are not presents! They are a lifetime commitment.