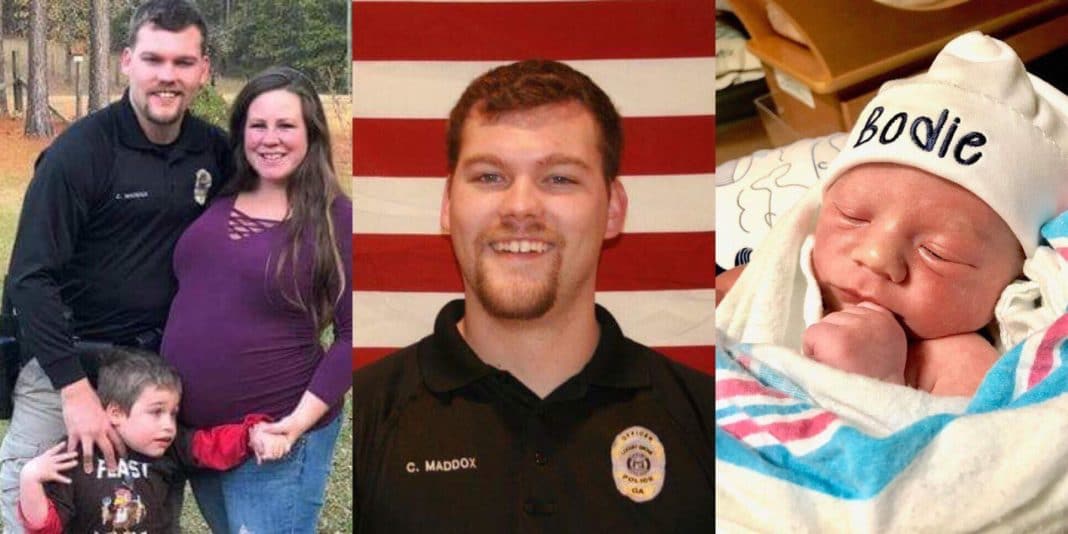 Law enforcement officers, (LEOs), take on the burdens, responsibilities, risks, and dangers of their job to help their communities and to make a difference. They are fully aware of the perils they might face with a traffic stop a car chase or when serving a warrant.

For some, they work at schools, working with children to try and prevent crime from happening. We frequently see videos and pictures on social media of police officers interacting with members of their communities; these images are fun and touching, showing the humanity of a particularly tough job.

Officer Chase Maddox, 26, served in the National Guard before joining the Locust Grove, Georgia, police department. He spent five years being a valued member of the police force. He went out of his way to interact with those in his community. One local store owner shared how the officer would check on him daily just to be sure everything was okay. He did this even though he didn’t need to.

Tierre Guthrie, a 39-year-old man, was being served with a bench warrant by Henry County Deputies for failing to show up to court. Officer Maddox was requested to assist and provide backup.

Officer Chase Maddox's wife gave birth today to a little boy. His name is Bodie. Our continued prayers for this family.

Unfortunately, while serving the warrant, shots were exchanged; deputies were injured; Guthrie sustained four shots and was killed. Officer Maddox was shot three times and died in the ambulance. Later, the coroner’s report said that a shot to his head ended the young officer’s life.

He left behind a child with special needs. His wife, Alex, was due to give birth to their second child any day. And indeed, just days after her husband’s death, she did have a healthy baby boy. He was named Bodie Allen Maddox in honor of his grandfather. Despite the terrible events before Bodie’s birth, he and his mother are doing well.

Alex will attend her husband’s memorial service. The community rallied behind the mother and her children as they honored their fallen officer. The road leading to the funeral home came to a standstill as the hearse carrying the officer’s body was followed by a procession of official vehicles and police cars.

A GoFundMe page was open for a short time but closed after it raised over $103,000. A Facebook page was also set up for the family to let the community know of upcoming events like a charity shooting and a candlelight vigil. The police department is giving food donations to the family. Friends have set up a bank account for them too. The public safety building in town is accepting newborn and infant items for little Bodie.

Meet Bodie Allen Maddox. He's the newborn son of Officer Chase Maddox, who was shot and killed in the line of duty just…

What an incredible pillar of support these folks are. There’s nothing like the love of family to help pull you through hardship. And sure, you don’t always need to be blood to have that familial bond.