Toddler Waves To Baby Gorilla, But Watch What Happens When He Starts Playing Peek-A-Boo 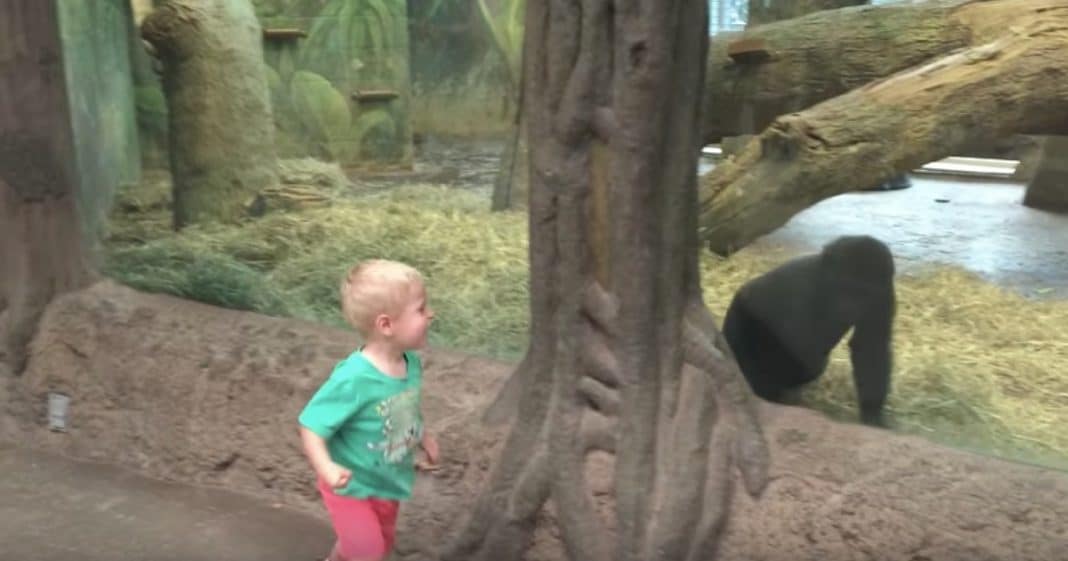 Famous psychologist Jean Piaget once said, “Play is the work of children.”

Play truly knows no boundaries and has no language barriers. Kids like to play, have fun, and laugh. Seldom do youngsters miss the opportunity to entertain themselves and others, no matter what species they are with – puppy, kitten, human, or, in this case, a young gorilla.

In this adorable video, a toddler starts playing a game of peek-a-boo with a young gorilla. Or is it the gorilla who starts the game? You can be the judge once you watch this adorable video. One thing is for sure, they are both loving running back and forth!

It looks as if the gorilla has the upper hand at several points in this spontaneous game of play as he tries to fool the little boy by hiding behind the tree display. The gorilla then fakes the boy by switching his direction and going back the other way.

The boy squealed out shrieks of delight as he played with his new friend. “I can’t believe he’s doing this,” said one of the adults watching the two primates play back and forth.

One of the other gorillas, presumably the young one’s mother, sat back and watched and appeared to be relaxed and okay with the fun taking place between her offspring and the human boy.

Gorillas are highly intelligent and very social animals. They are the largest living primates in the world. They are herbivores living mainly off of leaves, berries, plants, fruits, flowers, shrubs, vines, and occasionally small insects.

Gorillas are also an endangered species, with their only predator being humans. Being highly social animals, they interact with each other in complex social structures, forming tight bonds with each other and having family and friends in much the way humans do.

Did you love watching these human and gorilla babies play together as much as we did? So share this!