Tiny Dog Found In Bar, Rescuer Looks Closer And Realizes Why She Was Abandoned 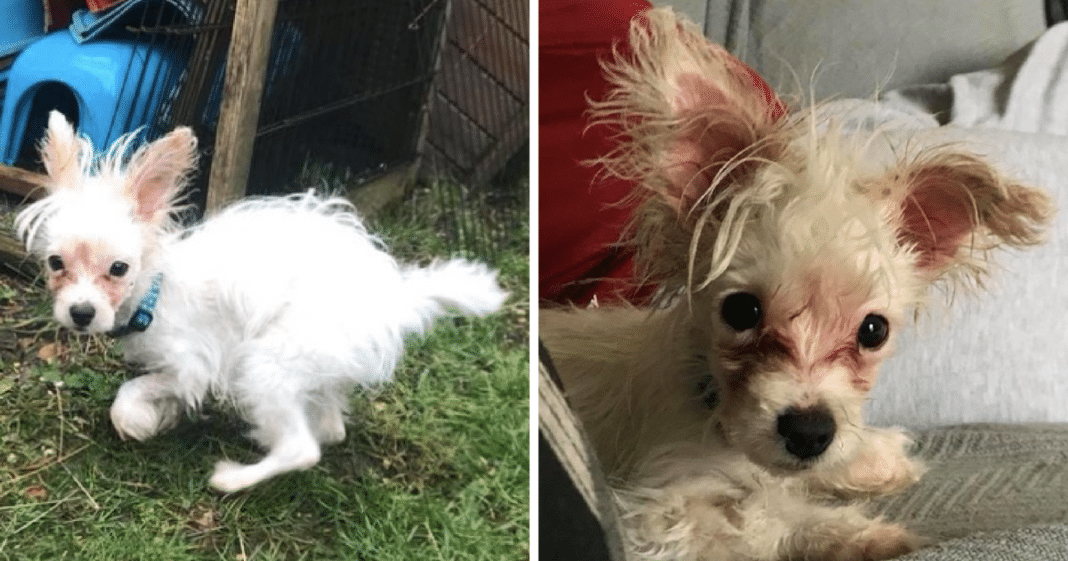 Emmie, a 5-month-old Chihuahua-Yorkie mix was abandoned at a bar. When inspector Lauren Bailey from the RSPCA got the call for yet another rescue, she figured it was like many of the others they attend on a daily basis.

But when she saw Emmie, her opinion quickly changed. because of her breeding, Emmie can’t straighten her front legs. Her spine is twisted; this makes walking for long distances difficult. The poor girl most likely developed her deformities as a result of horrible breeding. 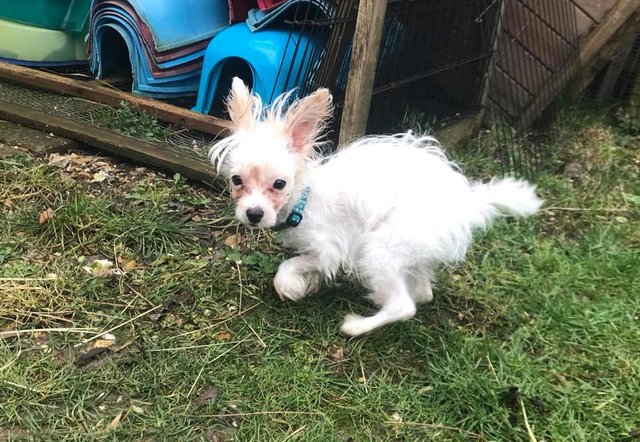 There is a widespread trend among breeders where they’ll breed small dogs and market them as “teacup dogs.” these irresponsible practices can result in long-term health issues like those little Emmie suffers from.

“Deformities can also be the result of bad nutrition and a poor start in life, with the mum and  pups not getting what they needed during the most important first weeks and months of the pup’s  life, leading to poor development,” Lisa Hens, a dog welfare expert with the RSPCA, said in a press release. 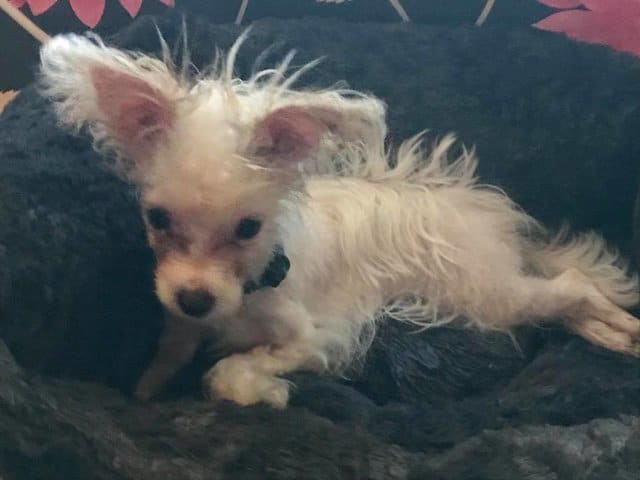 The RSPCA staff worried it would be difficult to find Emmie a home because of her special needs. They needn’t have concerned themselves though, because one of the collection officers immediately took a liking to the sweet girl.

Kate Wright and her family recently lost one of their beloved dogs; the family needed something, or someone to help pull them from this grief. Emmie was it. So Kate and her family began fostering Emmie and helping her overcome her challenges. 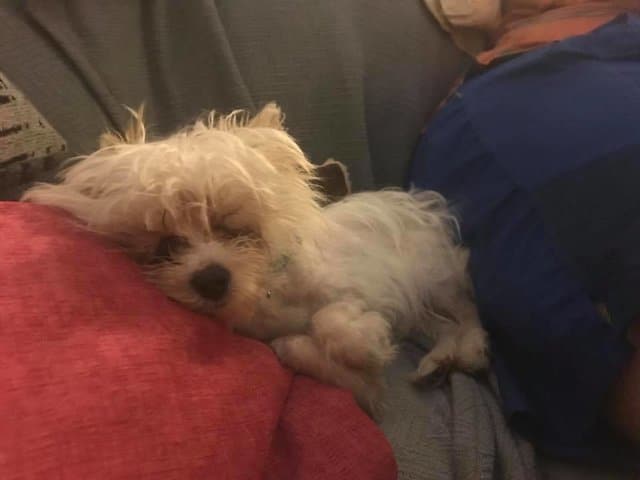 While they worked with Emmie, Emmie, too helped Kate and her dog, Sapphire. “I cannot believe how happy and loving this little girl is when she has been so badly treated and let down by humans,” Wright said in a press release. “She was so skinny and really weak when she arrived here. But she’s a little fighter and has a smashing little character. She’s really made  herself at home and loves Saff and my other new foster, Ruby.”

Despite her hardships, Emmie loves going for long walks. To make it easier for her, her human parents bought a sling. they can carry her when she becomes too tired. “That way she can still enjoy the fresh air and be with the whole family — we’d hate to think she was getting left out,” Wright said. 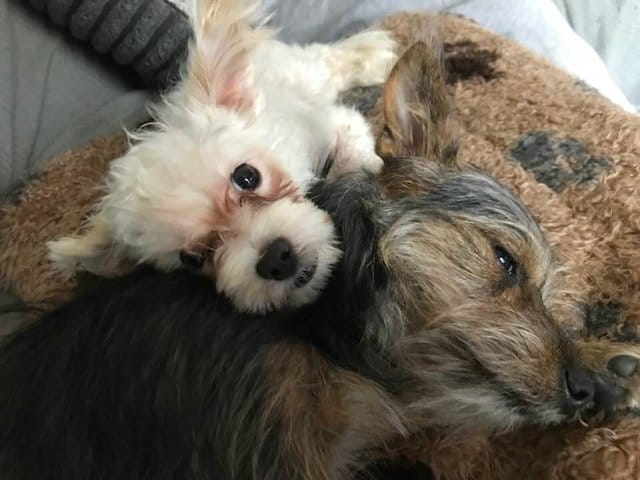 It didn’t take long for the humans and dogs to fall in love with Emmie. Kate and her family decided to adopt her. They’ll give this precious girl the forever home she has always deserved. 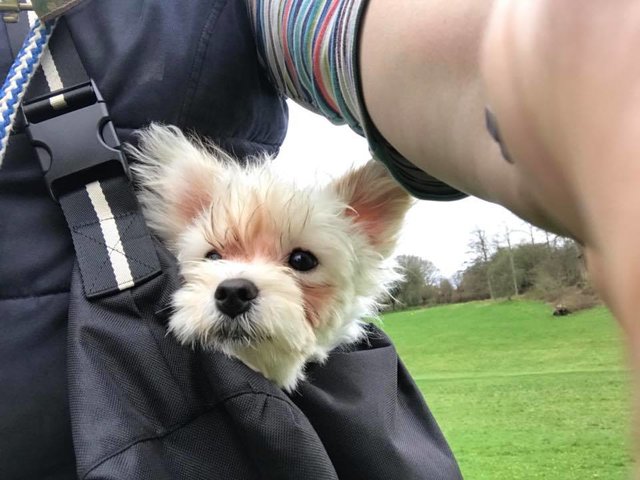 “She’ll never go hungry again and will also have a cozy sofa to curl up on in the evenings,”  Wright said. “She probably won’t live into old age, but she will now have a very happy, healthy life  with us for as long as possible.” 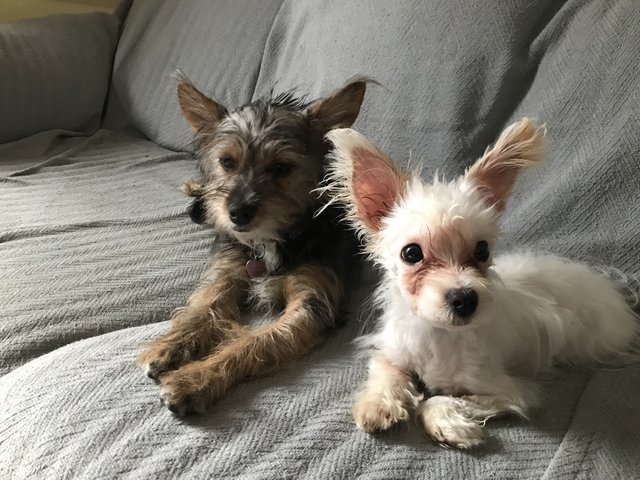