Tim Tebow takes a knee … to ask his girlfriend to marry him! — ‘I’m really blessed’ 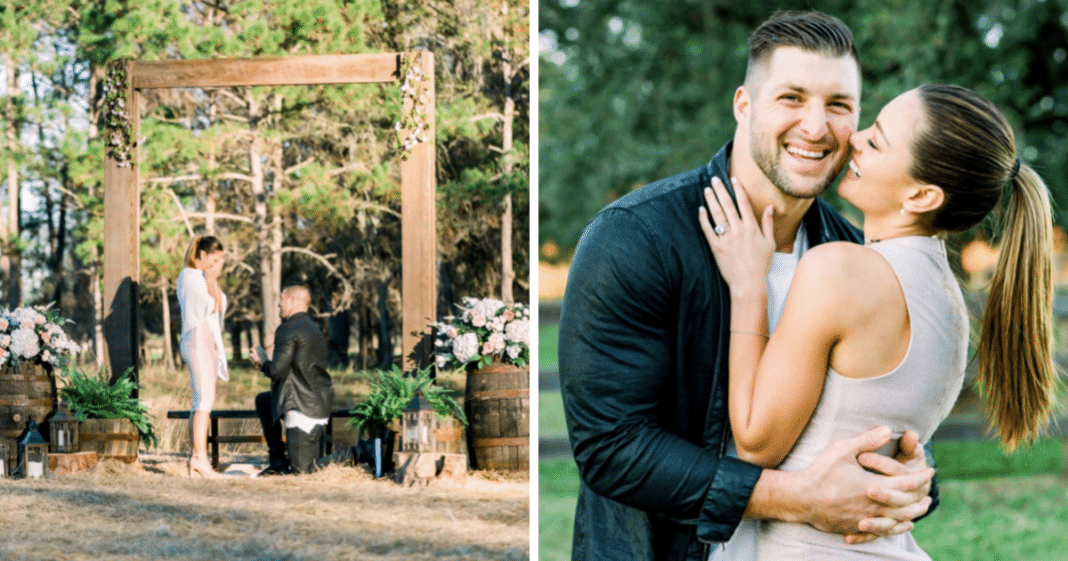 Football and baseball star—and outspoken prayer advocate—Tim Tebow has some fantastic news to share. He asked his girlfriend to marry him — and she said yes!

Tim Tebow and Demi-Leigh Nel-Peters, who is from South Africa and was crowned Miss Universe in 2017, have been dating for a while now. We shared a sweet story back in November about Tebow taking Nel-Peters home to spend the holidays with his family.

The former NFL quarterback proposed to Nel-Peters at sunset on Wednesday at his family’s farm outside of Jacksonville, Florida.

The happy couple strolled along the property stopping next to a small lake where Tebow had installed an arbor and a specially made bench that was engraved with the date the couple first met.

As the beautiful Nel-Peters said yes, Tebow slipped a 7.25-carat solitaire ring on her finger. “This ring is internally flawless. Just like you,” he said.

All together now, “awww.”

But wait – that’s not all! Tebow had another surprise up his sleeve. Right after the proposal, South African singer Matthew Mole stepped out from behind a hay bale and serenaded the couple with “The Wedding Song,” one of the couple’s favorite tunes.

Leading up to the big day, Tebow was concerned that she would sense his excitement and suspect that something was up, so he came up with a cover story. He told Nel-Peters that he was presenting his father with a brand new truck, and even borrowed a truck from a dealership and put a big bow on it to sell his sneaky story.

Not surprisingly, the proposal was a family affair. Tebow secretly flown Nel-Peters’ relatives and closest friends from South Africa to Florida to witness the surprise engagement. His parents, siblings, and friends were also on hand for an unforgettable moment. Everyone excitedly watched the proposal from a distance and out of view from Nel-Peters — who didn’t suspect a thing.

“I actually wasn’t really nervous,” Tebow shared. “I was excited. I wanted everything to be perfect and to go smoothly. But I wasn’t nervous to actually ask her.”

During a celebration dinner, where family and friends made speeches and toasts. Nel-Peters’ father encouraged everyone to “make a circle” around Tebow and Nel-Peters to pray for the happy couple’s new life together.

During her speech, 23-year-old Nel-Peters jokingly apologized to her future father-in-law saying; “I’m sorry you didn’t get a new truck, but you’re getting a new daughter!”

Every detail was perfect! Good job, Tim! We wish this couple a lifetime of happiness. This story really couldn’t have been any sweeter! Congratulations you two!