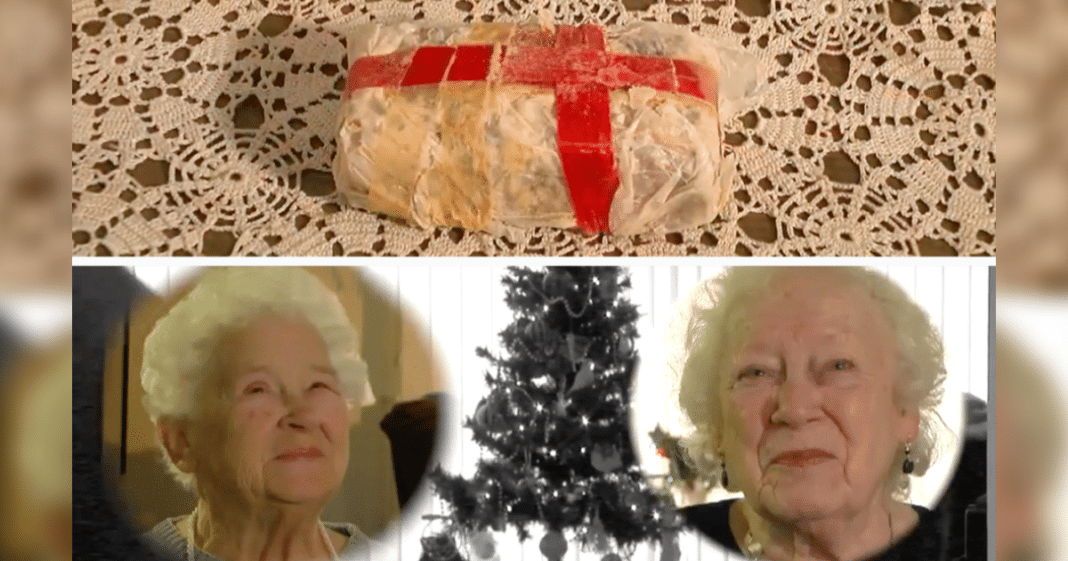 Near the southernmost tip of Lake Superior, in Cloquet, Minnesota, a locally famous war has been waged since 1950 when Truman was in the White House. The Cloquet Cake War has been an annual Christmas tradition for 68 years and counting and is likely to go on for many years to come.

It all started when two sisters, Donna and Charlotte, received a dry fruitcake from their grandmother for Christmas. She purchased it for 19 cents. Now 85 years old, Donna Melin recalled what she told her sister, 90-year-old Charlotte Anderson, about the fruity gift that year

“When I talked to her later on that night, I said you don’t have to worry about eating the fruitcake because it’s really dry,” Donna said.

For a now long-forgotten reason, Charlotte decided to keep her fruitcake. Or maybe the sister had hatched a mischievous plan; the following year in 1951, she wrapped the now even drier fruitcake and gave it to Donna for Christmas. Not to be outdone, Donna decided she would regift the fruitcake to Charlotte the year after that.

“Her husband said give it back to her next year,” Charlotte Anderson said.

The Cloquet Cake Wars had begun, over half a century of regifting the fruitcake that is now pretty much a fossilized rock. Each year, the sparring sisters and their husbands would come up with elaborate ways to disguise the fruitcake inside a gift.

One year, Charlotte was a little miffed when she thought she had received a book for Christmas. When she opened it, she found it had been carefully hollowed out by Donna’s husband. The infamous fruitcake was carefully nestled inside.

“When I opened it and he had cut this hole in here, I was kind of mad,” Charlotte said.

“She was looking forward to reading the book,” Donna added.

Another year, Donna came up with an idea that might have spelled the end of the tradition. She put the fruitcake inside a bird feeder on Charlotte’s front lawn for Christmas. However, not even the hungry birds would touch the cake. Charlotte dutifully saved it in her linen closet, as she has done all these years. Donna’s reserved place it on top of a file cabinet.

The fruitcake has appeared in countless guises every year, masquerading as a houseplant, a chocolate cake, or as a bottle of wine. Each year, it fossilizes a little more, ensuring that the tradition can continue. The artifact has traveled miles across state lines and was once re-routed through Canada, but it never ceases to appear again at Christmas.

The Cloquet Cake War has become an important part of the Christmas tradition for the sisters and their families. It’s not much to look at, but losing the brick-like cake would be unthinkable at this point.

“Oh yeah, it would be terrible. I think I’d cry,” Donna said.

“Even if we insured it, I wouldn’t even know what to insure it for,” Charlotte added.

Although the fruitcake originally cost 19 cents, today it’s priceless. The sisters believe their grandmother would love what her small gift has come to represent.

“Our grandma would be happy we are having fun with her gift,” Charlotte said.

Regifting Grandma’s fruitcake is now a tradition the sisters want to pass on to their kids. They hope they will continue to exchange the ancient relic with each other for generations to come.

Many families have unusual Christmas traditions that make the holidays something to look forward to. Tell us about yours in the comments.

See the Cloquet sisters below:

The diamond-like hardness of fruitcake is well known. It was even a subject on the Tonight Show when host Johnny Carson would suggest there is only one fruitcake in existence, regifted across the planet.

See Carson on the indestructible fruitcake below: