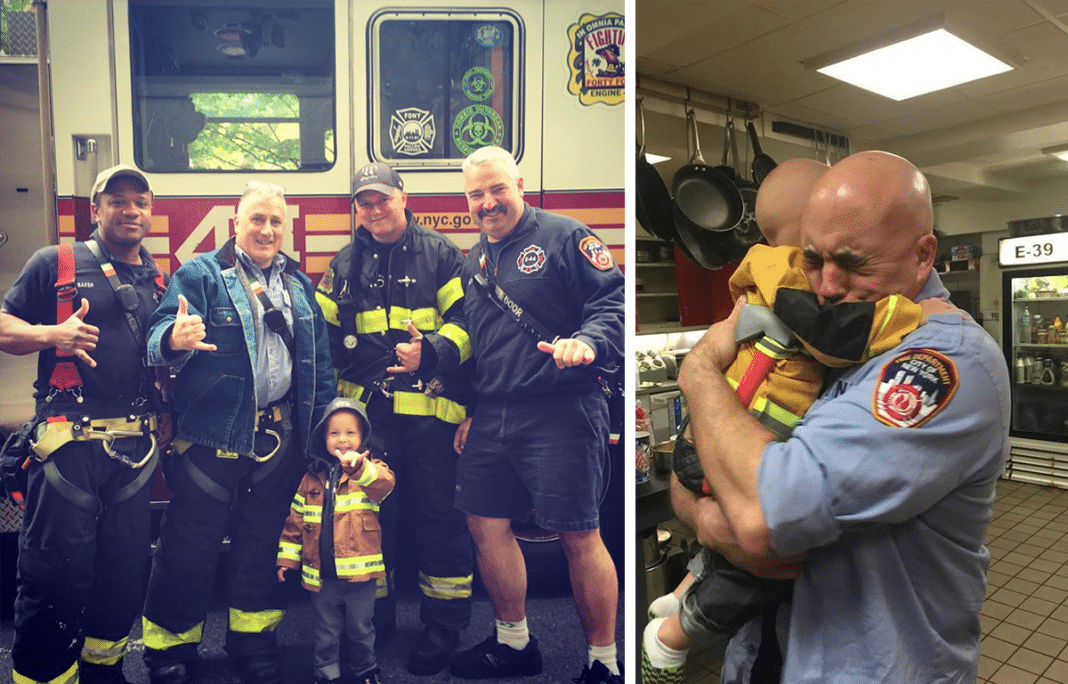 Trucker Dukes was a three-year-old honorary firefighter from Maui, Hawaii. He passed away on March 3, 2017, just days away from his fourth birthday. Trucker began a lifelong battle with neuroblastoma shortly after birth. In his short time on Earth, he had an enormous impact. Trucker became an honorary firefighter in two states, a Hawaiian warrior legend, and exemplified strength, courage, and bravery.

Although cancer had spread throughout half of his body by the time he was 19 months old, he fought to live, undergoing chemotherapy, radiation, and removal of a brain tumor in 2015. The family traveled to New York to get the best care for Trucker. Their travels would soon bring Trucker some amazing new friends.

Truckers father, Joshua Dukes, is a Maui firefighter, something that Trucker adored. He and his siblings enjoyed dressing up as firefighters, so proud of their heroic dad. While Trucker and his mother, Shauna Dukes, stayed in New York at the Rondal McDonald House, they encountered New York City firefighters on a call, and Trucker was immediately drawn to them like Disney World.

FDNY Captain Jim Grismer described what happened as Trucker approached him with his mom.

“I see this little boy excitedly walking towards me with his eyes aglow. I opened my arms and he basically climbed up and hugged me around the neck. It was as if we’ve been friends/brothers for years,” FDNY Captain Jim Grismer said to the Huffington Post. 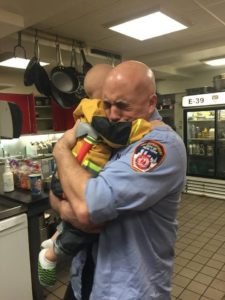 Trucker Dukes and the firefighters of the FDNY became fast friends, and shortly after his third birthday, he was sworn in as an FDNY honorary firefighter by Commissioner Daniel Nigro.

“This honor is so special to us because Trucker-Boy really thinks he’s a fireman,” Trucker’s mom, Shauna Dukes, said. “We are so blessed to have been adopted by the FDNY.”

Watch Trucker Dukes being sworn in below:

Not only was Trucker an honorary firefighter in New York, but also in Maui, after he was sworn in a year earlier with his father and taken on a ride in the fire engine to the applause of the community.

One day in April in New York, as Shauna and Trucker were headed into another difficult cancer treatment, they spotted the Engine 44 headed out on a call. The firefighters, by that time familiar with Trucker, gave him a ride to the hospital so he wouldn’t be late. You can see how beyond happy he was below.

Today is one of those days when it would be super easy to have a pitty party.. Woke up to grey skys, missing my family, and nervous about our long treatment day. #cancersucks Today is the first day they are treating his cerebral spinal fluid which we have never done before. They mix the toxic nuclear medicine in some mad scientist lab somewhere in nyc first thing in the morning, then deliver it sloan and mix it there with liquid radiation where they inject it into his head port and then we have to wait 4 hours after to have a scan which means a several needle pokes having both ports accessed and not eating all day until after the scan because he needs anesthesia:(:(:( the silver lining? As we were walking to the hospital this morning we saw engine 44 on a call at the end of our street and realized we knew "the boyz" #littlestbrother #FDNYhasbigaloha and they gave us a ride so we could get there on time!! #LOVEbeatscancer #bestridetothehospitalever #yeahboyz Thank you for making our day a little brighter!!❤️?❤️?❤️?❤️?❤️? Lt.Bobby Jones and FF Ali!!!

Disney is a blast for sure but nothing lights up our #littlelegend like a fire truck!! We met 2 of truckers "disneyland boyz" as he calls them while they were on a medical call in the park and they invited us to their fire station!! Thanks sooo much for the aloha #anaheimfirefighters we had a blast hangin with you guys today!! #teamtrucker #truckertough #truckercan #LOVEbeatscancer #onedayatatime #makeawishhawaii #ourwishiscomingtrue

Look who came to see us before treatment today!!! #truckersboyz #bestpartoftheday #FDNYhasbigaloha Love and appreciate you guys more than you will ever know!! Thanks for making our #littlelegend smile bigger than he has all week!!!❤️?❤️?❤️?❤️?❤️?❤️?❤️?❤️? #LOVEbeatscancer @fdny @fruiz13

In 2017, the family decided to bring Trucker back to Maui, where he would spend his final days with his family. On Instagram, they started the #TruckerToughChallenge, and thousands of people put on their best “tough faces” in solidarity with Trucker. On March 3, 2017, he passed away in his mother’s arms.

“We are going to honor him and live our lives as better dads, moms, siblings, husbands, wives and people of God,” read the family’s statement. “We love you little warrior. Run free in heaven with no pain, no tears, no suffering!”

Yesterday was beyond incredible!!! The love we all have for each other is something you can not put into words adequately.. its just something we all feel with all our hearts!! #lovealwayswins Thank you everyone who took time to send us messages, make posts, watch all the news clips, and honor our son who truly is a legend!!! Thank you to all of Truckers boys who made the ceremony possible and for us to be here. We love you and appreciate you more than you know!!!! And we are so so encouraged by your love!! #onedayatatime #sharedachinghearts #LOVEbeatscancer

Shauna shared another photo of Trucker with a T-shirt and an important message about life and loss.

“One person can make a difference, and everyone should try!!” ~JFK

“One person can make a difference, and everyone should try!!” JFK