Teen makes teacher’s life a living hell every day, so dad shows up at school to teach him a lesson 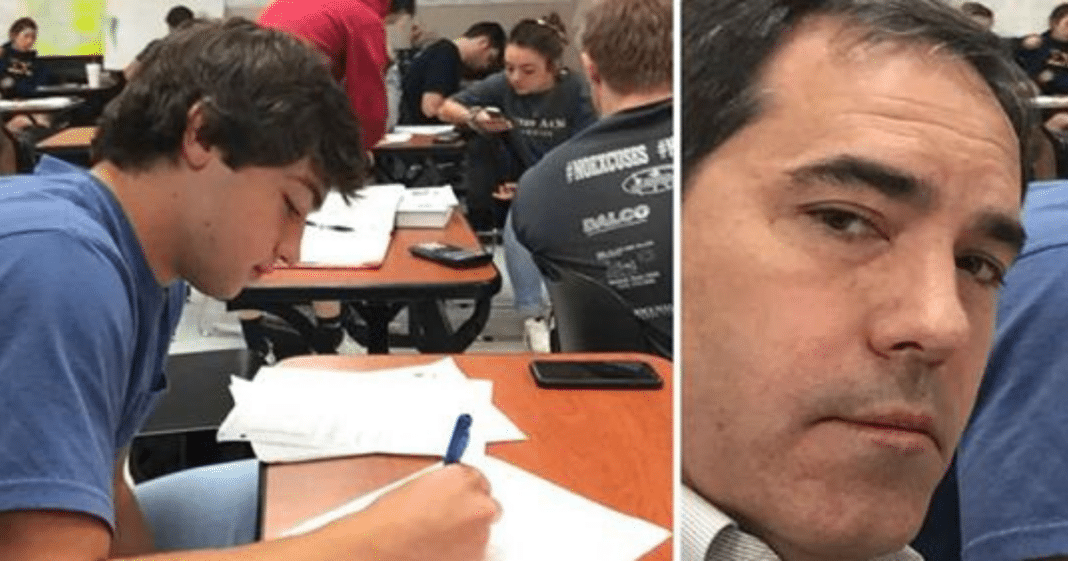 As a teenager, there’s almost no one in the world who can both love and embarrass you the way your parents can.

Most of us have cringe-worthy memories of something our parents did in front of our friends that made us want to find a hole to crawl in.

So when a Texas dad discovered that his 17-year-old son was acting up in school, he started thinking about the best way to correct his wayward son’s behavior.

He thought about taking the cell phone away or grounding him, but then came up with the perfect idea, one that has parents around the giving him a standing ovation.

Enjoying time with my son at the Cotton Bowl. A big thank you to Rick Bowles for the great tickets.

On several occasions, the teacher told the child’s family that their teenage son continually disrupted class by talking too much.

So Bradley Howard decided it was time to give his chatty son, also named Brad, an ultimatum.

“For some reason I said, ‘Hey, if we get another call I’m going to show up in school and sit beside you in class,’” Dad Brad said, according to Buzzfeed..

However, like most teens, his son didn’t take the threat seriously and continued cutting up in his physics class annoying both the teacher and his other classmates.

When Mr. Howard got another call about his son’s disruptive behavior, it was time to back up his words with action.

‘I didn’t even notice him’

It wasn’t something Mr. Howard wanted to do, but he knew that he needed to follow through and teach his son a valuable lesson about misbehaving.

“Friday is my only day off, so my wife wakes me up and says, ‘Brad, it’s time for you to go to school.’ I thought, Oh no, what have I done?” the dad said.

The next day when his kid walked into his physics classroom, to his horror, he found his father waiting for him right next to his desk.

“I didn’t even notice him until after I had said hi to all of my friends, but I was super shocked,” the teen said according to Buzzfeed.

Of course, the other teenagers in the class enjoyed seeing their talkative classmate silenced by his father’s presence, and enjoyed a few good laughs at the embarrassed teen’s expense.

“My dad told my brother if he got another call from the physics teacher complaining he would go sit in his class..dad got another call,” writes Molli on her Twitter post.

Even mother Denise Howard posted about her husband’s loving lesson to their son.

“The Howard men are famous,” said Bradley’s mom. “We’ve had a great time with this but more than anything we hope we don’t get any more calls about Bradley interrupting in physics class!”

Like his wife, Brad senior hopes he doesn’t have to make regular appearances to his son’s high school classroom.

Dad said the physics teacher was grateful but added, “I pray it was a one-time thing,” he said. “I don’t think I’d ever do it again.”

It’s great to hear about parents getting involved in their children’s education, and teaching them how to respect others in such a positive and proactive way.

Kudos to Mr. and Mrs. Howard for being outstanding parents!