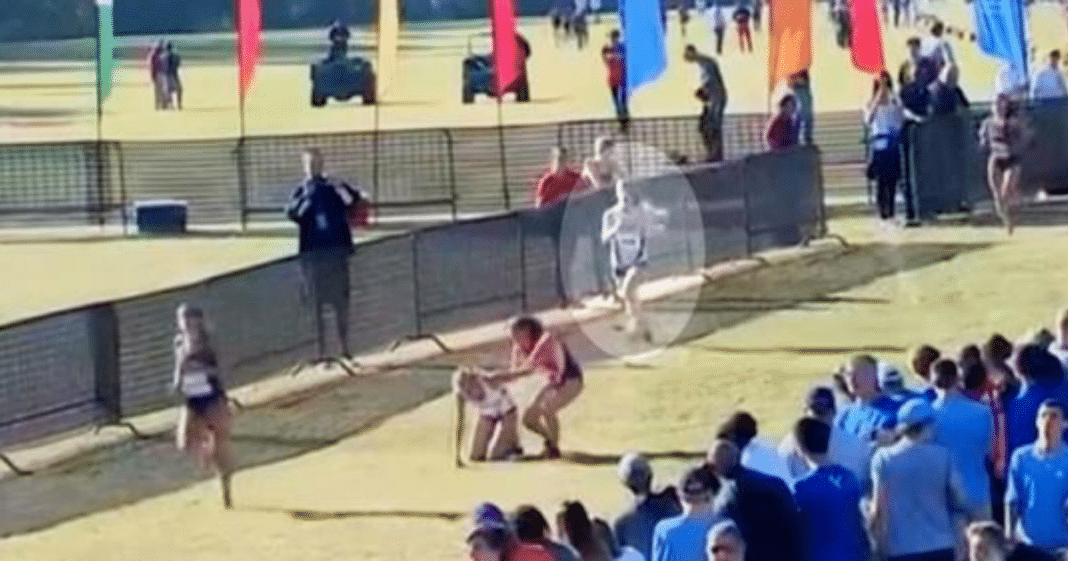 Madeline Adams was running the 6K ACC women’s cross country championship race in Cary, North Carolina. She was in her junior year at Boston College and was getting better and better. She thought she would have no problem completing the race. In fact, she thought it would be her best time ever. Then, right before the finish line, something amazing and shocking happened.

“I was feeling great, I was ready to rumble. I felt like this was my time to shine.”

The finish line was so close, at just 20 yards away. Then suddenly, she found herself on the ground. Her legs just gave out on her.

“I was running the race of my life. I was doing incredibly well,” Adams said. That’s when things turned. “I was coming up that hill (to the finish line), I started to feel really fatigued,” Adams continued.

“All of a sudden, I get this wave that comes over me and my legs just truly gave out from underneath me. I had no control.”

As the ACC Network broadcast the race, something amazing happened on camera. As she struggled on the ground, many of the runners ignored her and went by. Then Clemson’s Evie Tate decided to give up her standing in the race, stopping to help Adams. Tate tried to get Adams back on her feet so she could make it to the finish line, but her tired legs just wouldn’t cooperate. Other runners went around them to finish the race.

Then Rachel Pease from Louisville selflessly gave up her chances of a competitive time and grabbed Adams on the other side. Together, the three women made it for the finish line. It didn’t matter what team the women were on. It was a show of true sportsmanship and compassion.

The team from North Carolina called it:

“Sportsmanship at its finest”

Sportsmanship at its finest, a Clemson and a Louisville runner help a Boston College runner across the line #ACCXC pic.twitter.com/LYkBH9nf8S

Together, they crossed the finish line, where Adam’s teammates gave the girls from the opposing teams big hugs for what they did. After the race, the video started appearing online, drawing millions of views.

The Atlantic Coast Conference shared the video on Facebook, where it has now reached over 2.3 million views to date.

Most of the comments were from people expressing how wonderful it was to see such a moment of selfless sportsmanship and help from people from other teams.

“Most awesome show of sportsmanship I have seen. These athletes should be commended!”

Madeline Adams high school cross country coach, Jack Reed, weighed in, saying he hoped that Pease and Tate would be considered for an ACC Sportsmanship accolade.

“…what those two young ladies so selflessly did, without giving a single thought about their own short-term fortunes, was a testament to the great sport of cross country and all those stellar student-athletes who choose to participate,” said Reed.

Adams had no idea that the video was going to receive as much attention as it did. Even though she was disqualified from the race, she believed something even better than she could have dreamed came out of it.

“The great part that comes out of this is there are two amazing girls that helped me, who are completely selfless and just amazing people with amazing character,” Adams said.

She said that she had given it her all, and wasn’t upset about not officially finishing.

“I knew I had run the hardest race of my life,” Adams said.

The girls who helped her cross the line finished much later than they would have otherwise, coming in 127 and 128th out of a field of 131 runners. However, Adams realized that what happened that day would have much more impact and importance in the women’s lives going forward than winning any race ever could have.

A few days after the race, Adams recalled:

“(They’re) both amazing people of such great character…”

“It’s not always about winning a race or running a PR –moments like that are Going to happen over and over.”

“Moments where we help each other and show that sports aren’t so cut-throat are way more important.”

The next year in July 2017, Evie Tate and Rachel Pease received the ACC Sportsmanship Award for the year.

See the video from ACC Digital Network below: