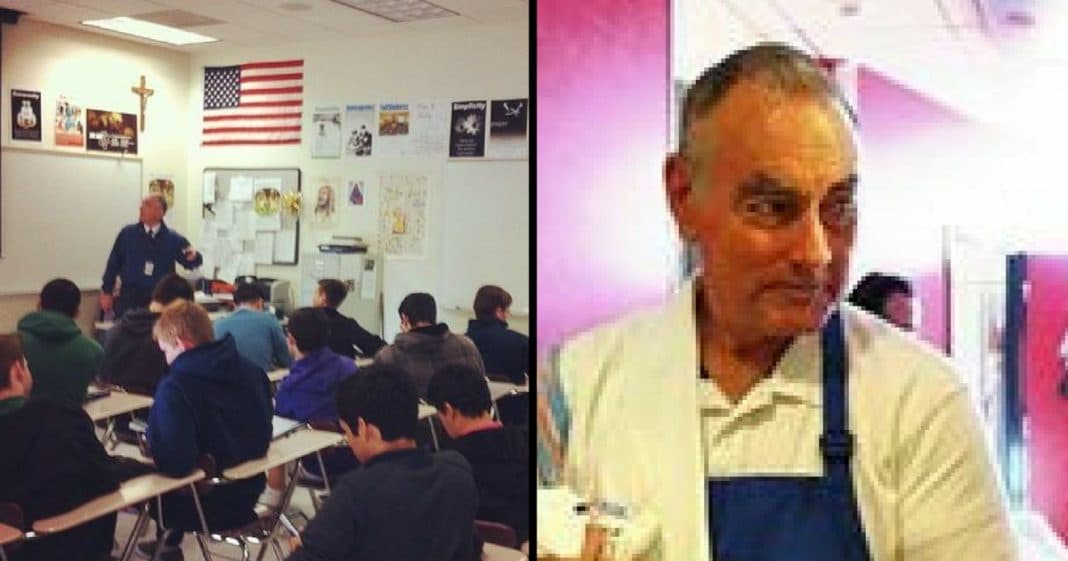 “Don’t judge a book by its cover” is an adage we are all familiar with, one that most of us would think we have no problem upholding.

I’m sure the students of Jim O’Connor, a 70-year-old algebra and calculus teacher at St. Francis High School in La Cañada, California, thought they had him all figured out when they labeled him as “strict” and “stern.”

Mr. O’Connor himself probably wouldn’t disagree with those labels. He told CBS News, “It drives me crazy when people say school should be fun. I mean, it’s nice if it could be, but you can’t make school fun.”

Even still, O’Connor, a Vietnam veteran and former engineer, knows there are sides to him the students couldn’t even imagine! Despite his seemingly tough outward demeanor – and unbeknownst to his students – O’Connor has a soft heart that he puts to work outside of his school hours.

Pat McGoldrick, a senior at the all-boys preparatory school, was the first to discover all that lies beneath the hard exterior of his “mean” math teacher. Pat was visiting Children’s Hospital Los Angeles for a school blood drive when, to his surprise, he discovered the teacher whose class he looked the least forward to was actually a top blood donor, holding a record at the hospital…PLAQUE and all!

“It was disbelief, really,” Pat said, “It was almost, like, kind of finding this alter ego that he has.”

As if this discovery wasn’t enough of a perspective shift for Pat, he learned something else about his teacher…something even more admirable.

It turns out Mr. O’Connor spends several days a week volunteering at the hospital as a baby cuddler. Having never been married and with no kids of his own, O’Connor’s job is to hold, snuggle, walk, and endear the infants whose parents just aren’t able to. Apparently, he’s also really good at it.

“They just stare at him adoringly and he can really just get the crabbiest baby to calm down,” said registered nurse Sherry Nolan. “He’s just a natural-born cuddler.”

It didn’t take long for news of Mr. O’Connor’s hidden side to break at St. Francis High School, and the students have grown to respect him more because of it.

Sometimes a hard shell is covering up a soft inside. Be encouraged to dig deeper.

I’m so happy to see that Pat and his fellow classmates have come to think better of their awesome math teacher!

Were you touched by what this “gruff” math teacher does in his spare time? So share this!