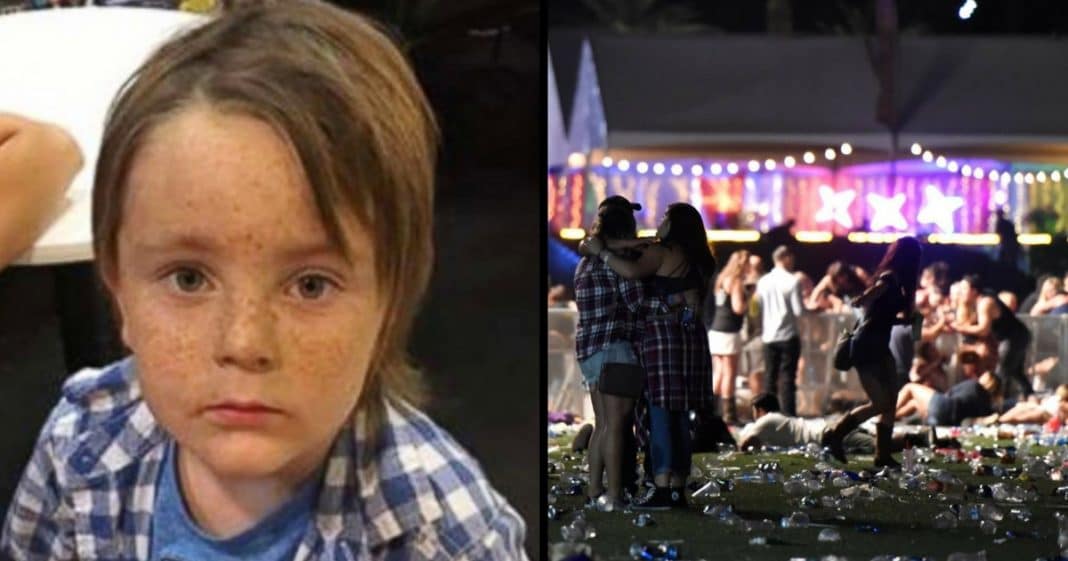 Are you familiar with that brief wave of anxiety that washes over your body when you reach in your pocket and don’t feel your wallet, phone, or car keys? Not knowing where they could be, where you could have lost them, or how to begin replacing them causes us to have these mini panic attacks that almost instantly put us to shame when we realize the item we were frantic over is just in our back pocket, instead of the front.

Well, that nervousness is a rock next to the moon compared to the fear Doris Huser felt Sunday, October 2nd, at the Route 91 Harvest festival in Las Vegas. Doris attended the concert with her daughter, her son Aden, and her children’s aunt. The family had been attending the 3-day country music festival all weekend and were enjoying the final night together.

Doris stepped away from her family to take her daughter to the restroom, leaving 5-year-old Aden with his aunt. While she was gone, the unimaginable happened.

A man opened fire on the concert crowd from his hotel room on the 32nd floor of the Mandalay Bay Resort and Casino, just a few hundred feet away from the festival grounds. Just after the shooting began, Doris rushed back to the spot where she had left her son, but Aden was gone.

In the midst of the tumult and chaos, Aden had become separated from his aunt. He had no clue where his mom and sister were and no idea what to do next.

Nearby, 26-year-old Lindsey Rogers and her friend detected the helplessness and confusion all over little Aden’s face. He wasn’t crying or screaming, but he was obviously lost, alone, and scared.

Lindsey’s friend did the quickest and most effective thing she could think of in that moment: she posted a photo of the little boy on her Facebook page, asking for help reuniting him with his family, and then they got him out of there!

“I was nervous to take him because I knew that his mom would be devastated to find that her child was gone, but in the moment we thought that the best decision was to get as many people as safe as possible. The shots were so sporadic and it wasn’t stopping so we took a chance,” Lindsey said.

They told Aden the loud noises were just fireworks so he wouldn’t be so scared.

Miraculously, the Facebook post appeared on the right News Feed and Aden was claimed by his grandparents at Sunrise Children’s Hospital. Eventually, he was reunited with his mother as well.

“All I remember is seeing my son come out of the garage door and I dropped to my knees. He ran as fast as he could to me, and we were like one for a second. He just held on to me so tight and I held on, and we just kind of interlocked,” Doris told KTNV Las Vegas.

I cannot even begin to imagine the horror Doris and her family must have felt in those moments of not knowing where Aden was, but I am sure the joy and relief of having him back in her arms safe and sound outweighed the anxiety of his absence.

Situations like these open our eyes to the good people who do exist. A reunion between Aden and his family would have probably not been possible if it weren’t for the compassion and courage of Lindsey Rogers and her friend.

Thank you, ladies, for extending love and sympathy to this little boy and saving his life!

Did this incredible story touch your heart as much as it did ours? So share this!