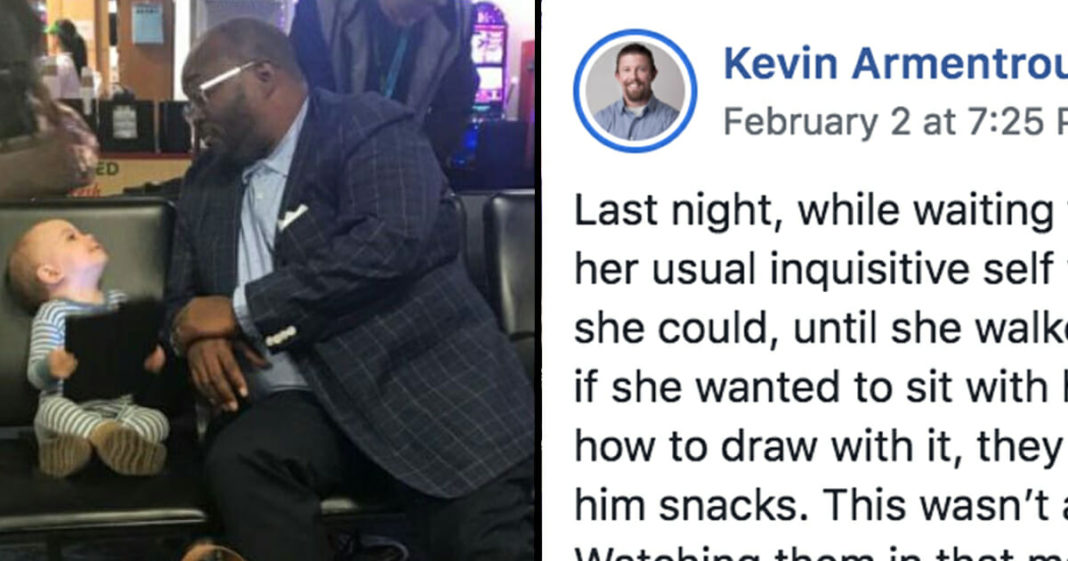 Sitting around and waiting at airports is probably one of the most frustrating and boring things we have to do in our modern society of fast-paced living.

Throw a toddler into the mix, however, and you’ve gone from boredom to what could be misery if they become tired and fussy. Keeping them entertained is NOT easy!

But there’s also an added stress to traveling with young children. The constant fear that a bad guy could grab them. It’s every parent’s worst nightmare. So when a stranger begins to speak to our kids, we’re usually instantly put on guard.

One man recently experienced this, but he sat back and allowed it to happen, and wow, are we glad he did. Because what transpired is awe-inspiring and makes us appreciate life and love even more.

Kevin Armentrout, an author and public speaker, was at an airport with his 16-month-old daughter when he had a memorable experience with his little girl and a man named Joseph Wright, a sales manager from Oklahoma. He posted about it on Facebook. 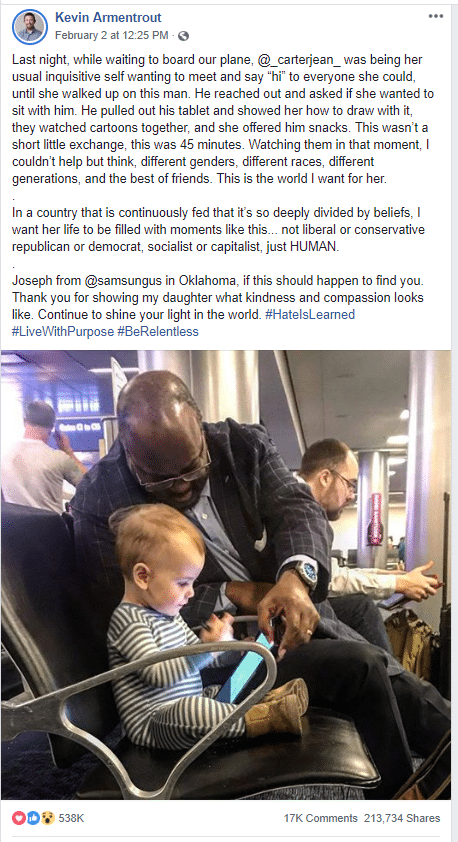 “Last night, while waiting to board our plane, [Carter Jean] was being her usual inquisitive self wanting to meet and say ‘hi’ to everyone she could, until she walked up on this man,” he wrote.

“He reached out and asked if she wanted to sit with him. He pulled out his tablet and showed her how to draw with it, they watched cartoons together, and she offered him snacks. This wasn’t a short little exchange, this was 45 minutes. Watching them in that moment, I couldn’t help but think, different genders, different races, different generations, and the best of friends. This is the world I want for her.

“In a country that is continuously fed that it’s so deeply divided by beliefs, I want her life to be filled with moments like this… not liberal or conservative republican or democrat, socialist or capitalist, just HUMAN.”

In an interview with Yahoo News, Armentrout shared this.

“I’m conscious of people’s personal space, so I tried to steer her away, but Joseph said, ‘Let her come up.’”

Wright allowed his daughter to draw on his tablet, then played a Charlie Brown cartoon, and she offered him a bite of her cheese puffs. “There were a few moments she screamed and tried to get into his work calendar, but he couldn’t care less,” Armentrout tells Yahoo Lifestyle. “Joseph asked her if the Patriots would win the Super Bowl and she said no.”

There’s so much love in the world if you know where to look for it and if you just sit back and let it happen.